Val Demings Is in the Mix to Become Joe Biden's Running Mate. Is Her Police Background an Asset or a Liability?

Demings, at a House Intelligence Committee hearing on impeachment in November, is in the running to join the Democratic ticket
Gabriella Demczuk for TIME
By Lissandra Villa

On the cusp of Donald Trump’s Senate impeachment trial in January, Val Demings went to dinner at a Washington seafood joint, the Salt Line, with her colleague Hakeem Jeffries. The two Representatives had recently been chosen, with five other House Democrats, to present the case to remove the President from office–the first two Black presidential impeachment managers in American history. As they discussed the weight of the role, Jeffries, the chair of the House Democratic Caucus, made a prediction. “When this is all said and done,” he told Demings, “you’re going to be on the short list for Vice President.”

“Get out of here,” Demings said.

“I just have that feeling, Val,” Jeffries insisted. “The world is getting ready to see what we here in Congress already know about who you are.”

Jeffries was right. This summer, Demings, 63, has shot up the list of candidates to be Joe Biden’s running mate. Her rise began with the impeachment trial, where she turned complicated arguments about Trump’s conduct into straightforward language. It has accelerated in recent weeks amid the nationwide racial-justice protests following George Floyd’s death in Minneapolis. As Biden faces pressure to add a woman of color to the ticket, and to repel Trump’s claims that he’s soft on crime, Demings may be a match for the moment: a Black woman from the battleground of Florida who capped a 27-year career in law enforcement by becoming Orlando’s first woman police chief in 2007. In one USA Today/Suffolk poll conducted at the end of June, 72% of Democrats said it was important to them that Biden choose a woman of color.

Biden has confirmed that Demings is among nearly a dozen women on his list. But her candidacy faces challenges as well. Biden, 77, has said he’s looking for a running mate who is “ready to be President on Day One.” Demings is only in her second term representing Florida’s 10th District, a short political résumé for national office. And to some of the Black voters whom Biden is counting on in November, her career in law enforcement is not an asset. Demings was “a leader within an institution that is inherently violent, racist, patriarchal and protective of capitalism,” says Charlene Carruthers, an organizer in Illinois with the Movement for Black Lives. “It’s not simply enough to have someone who looks like me as the vice-presidential nominee. I’m interested in someone who shares my values and is aligned with our vision.”

Demings rejects the proposition that her record in law enforcement might be a liability in this political climate. “I have no regrets about the career paths that I’ve taken,” she says from her Washington apartment in a June 25 interview with TIME. But her chances to become Vice President rest in part on whether Demings–and Democrats–can reconcile her identity as a former cop with that of a Black woman in a country where Black people have the most to fear from police. Some on the left see her as a symptom of the problem, not a beacon of progress. This raises some hard questions for Americans. How much should we expect our politicians to account for injustices that are bigger than any one person? Is it fair to ask public servants how their own experiences with racism or sexism guide their approach to fighting such forces stacked against them? And are those who have found success within existing structures an extension of systemic failure or the ones best equipped to fix them?

When Valdez Venita Demings was tapped as Orlando’s police chief in 2007, the announcement reached officers in the department by pager. She was the first woman to hold the role, and kudos poured in–flowers, phone calls, emails. But it didn’t take long for Demings to notice something odd: Congratulations, well-wishers would say. You know that’s a big job.

It was. But no bigger than it had been under the seven male chiefs Demings served under before taking the position. None had been challenged on whether they could do it. The implicit sexism wasn’t a surprise: as she climbed the ladder in the department, she recalls being quizzed on policy by subordinates to see if she knew what she was doing. “When you are a woman and a Black woman,” Demings says, “when you walk into the room, unfortunately, men and women sometimes determine what they think you are capable of.”

Demings was born in Jacksonville, Fla., one of seven children crammed into a two-room house. By age 4, she’d been called racial slurs. Her mother was a maid; her father worked as a janitor, and mowed lawns and picked oranges on the side. Sometimes he had to ask his employers for advance pay to foot the bill for his children’s class trips. Demings took her first job as a dishwasher at 14, and later became the first in her family to graduate from college.

Her first career was as a social worker, working with foster children. In 1983, she left Jacksonville for Orlando, where she joined the police force as a way to save money for law school. But she stayed, drawn to a job where she believed she could help people who needed it. “Every job that she did, every position that she held, she did it with finesse, she did it completely,” says Renita Osselyn, a retired Orlando Police Department (OPD) school resource officer and close friend of Demings’. In 1984, when Demings was a first-year officer and he was a detective, she met her husband, Jerry Demings, who is now the mayor of Orange County, Florida, which contains Orlando.

When Demings became chief, Orlando’s crime rate was at an all-time high, the Great Recession was just around the corner, and the Black Lives Matter movement was still several years away. She set to applying her social-work background to her new role, creating a community initiative, Operation Positive Direction, that paired at-risk youth with mentors. The department also partnered with GED programs, sending officers to homes to check on those who had missed class. Demings says she imposed an early-warning system in 2008 that triggered reviews of officers who showed patterns like those of force, absence and citizen complaints. She says that she saw arrests as short-term solutions and preferred instead to address the root issues that cause “decay” in communities. She boasts of reducing the crime rate in Orlando 40% during her tenure.

At work, Demings was known as a good communicator. Terrell Fawbush, a retired officer, says that when two of Fawbush’s children and a niece died in a car accident in 1995, Demings, then a lieutenant, served as a department liaison to help her through the tragedy. Demings did everything from driving Fawbush to the funeral home to making sure her family had meals figured out. “She knew what was best for me to keep me going,” Fawbush says.

It’s a careful answer, similar to a job applicant saying their greatest weakness is trying too hard or caring too much. But it’s difficult to imagine she does not have specific regrets. Like the time she left her vehicle unlocked and had her department-issued firearm stolen. Or the 2010 incident in which an officer, Travis Lamont, broke the neck of an 84-year-old veteran, Daniel Daley, while performing a “dynamic takedown,” according to the Orlando Sentinel. At the time, Demings, who left her post as chief in 2011, found the technique to be “within department guidelines” but ordered a review of the policy. Daley was awarded $880,000 by a federal jury. Demings says that as a result of the ensuing policy review, the department modified its policies “to require the engagement of second officer to more effectively manage individuals during disturbance calls.”

The Daley incident was highlighted in a 2015 Sentinel investigation that found the OPD used force more than twice as often as other similar-size agencies. Most of the time period covered by the report was after Demings left the OPD. But critics say that as chief Demings failed to address the department’s cultural problems. “Val Demings is part of the establishment here in central Florida,” says Lawanna Gelzer, a community activist in Orlando. Asked whether the OPD has systematic failures when it comes to use of force, Demings demurs, saying that “every agency has a responsibility to always look within itself and try to improve.”

Shortly after retiring in 2011, Demings set her sights on politics. She ran for Congress in a Republican-leaning district in 2012, coming within 4 points of the GOP incumbent. In 2016, she ran again, in a redrawn district that favored Democrats, and won.

In January, Demings was the only nonlawyer among the team of impeachment managers. Trial days ran late, after which the managers received packets they needed to be ready to discuss by early morning. Demings was battling bronchitis. But she made a mark. At one meeting, recalls Ashley Etienne, an adviser to House Speaker Nancy Pelosi, several of the lawmakers were discussing the day’s material. Demings interrupted. “I just think it’s really simple,” she said. “It’s right vs. wrong. And what the President did is wrong.”

In early May, weeks after he’d committed to picking a woman for the role, Biden told a Florida television station that Demings was one of “close to a dozen really qualified and talented women who are on the list” of potential running mates. Perhaps the biggest question for Biden’s team is whether Demings’ record in law enforcement is a boon or a burden in this political environment. She has responded to the protests by saying that if she was still an officer, she would be out taking a knee with protesters, and wrote a Washington Post op-ed asking her “brothers and sisters in blue: What in the hell are you doing?” She has called for reviews of law-enforcement hiring policies and police training standards.

“If the argument is going to be she’s not Black, she’s blue, then God help us all,” says John Morgan, a Florida attorney, Democratic donor and longtime Demings backer. “I don’t know where it ends.” But progressives point to her 2018 support for the Protect and Serve Act, which makes it a federal crime to knowingly assault law-enforcement officers, as a troubling sign. She’s not the only Democrat who’s come under scrutiny for her record in law enforcement. Senator Amy Klobuchar, a former Minnesota prosecutor, dropped out of the vice-presidential running after Floyd’s death in response to criticism of her record. Progressives have challenged Senator Kamala Harris over her criminal-justice record.

Biden has cast himself as a transitional figure, someone grooming the next generation of Democratic leaders. Whomever he picks as a running mate could be a top contender for the Democratic presidential nomination as early as 2024. For Demings, that would be a meteoric rise. In our interview, I asked her whether she would be prepared to become President. “I’ve chosen tough jobs in my lifetime,” Demings says. “Regardless of where this path takes me, just as I’ve been ready before, I’m sure I’ll be ready again.”

–With reporting by MOLLY BALL and JULIA ZORTHIAN 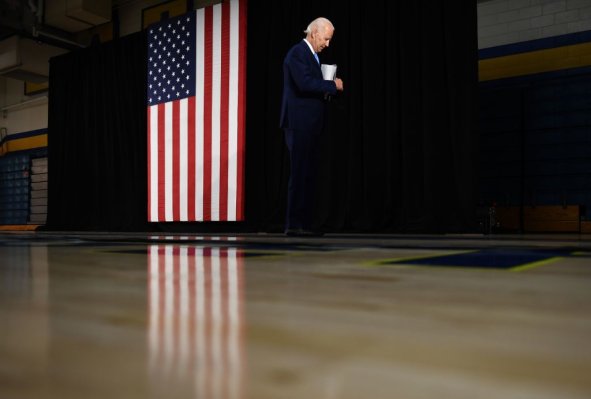 Biden: U.S. Can't Heal From COVID-19 Without First Healing the Country
Next Up: Editor's Pick