International Students in the U.S. Could Face 'Devastating Upheaval' in Wake of ICE Guidance for Foreign Students to Leave if Schools Are Online-Only

By Sanya Mansoor and Jasmine Aguilera

On her birthday, Alice learned that her future as a student in the U.S., and the futures of hundreds of thousands of international students like her — may be in jeopardy. New federal guidance announced Monday stated that international students will be required to leave the U.S. if their schools switch to an all-online curriculum amid the COVID-19 pandemic.

Students already residing in the U.S. have been thrust into panic and uncertainty. “We’ve uprooted our entire lives to be here,” Alice says. She asked for her name to be changed because of fears about her immigration status. “The fact that it’s not coordinated and it’s not consistent messaging is very distressing for us and for our families.”

A lack of clarity has left students and colleges unsure of what happens next. At least half a dozen students told TIME they worry they will have to leave the U.S. before the start of the college year.

Harvard College and the Massachusetts Institute of Technology (MIT)—which both made announcements that most of the fall semester would be online amid the pandemic—filed a lawsuit Wednesday against the Trump Administration. “Immediately after the Fourth of July weekend, ICE threw Harvard and MIT— indeed, virtually all of higher education in the United States—into chaos,” the lawsuit states.

“ICE’s action proceeded without any indication of having considered the health of students, faculty, university staff, or communities…Certainly, no notice-and-comment period was provided.”

On Thursday, California Attorney General Xavier Becerra announced the state is also planning to file a lawsuit against the Trump Administration over the new rule. There are more than 184,000 international students in California as of January, more than any other state in the country, according to Becerra. “We’ll see the Trump Administration in court,” he said during a Friday press call.

On Tuesday, Massachusetts Attorney General Maura Healey tweeted that the state would “sue” over the ICE order. “Not on my watch. This is just another cruel (& illegal) attempt by the Trump Admin & ICE to stir up uncertainty & punish immigrants,” Healey said.

Normally there are requirements set by the program which manages international students on M-1 and F-1 visas, the Student and Exchange Visitor Program (SEVP), in relation to how students study and remain in the U.S., including a rule on how many classes should be held in person. However, at the start of the COVID-19 outbreak in the U.S., the SEVP announced an exception for the Spring and Summer semesters, allowing greater flexibility for international students to remain in the U.S. as many classes made the switch to remote learning. Monday’s announcement by ICE means that exception no longer applies to the Fall semester, and students with 100% online course loads will need to leave the country or switch to a school considered to have in-person instruction.

Alice, who is from the Philippines but has been in the U.S. since last August, tells TIME she has been “waiting for emails with bated breath” as her school navigates what exactly the ICE guidance means for students. “I know they’re doing their best. It just sucks,” she says. (Rutgers University told TIME in an emailed statement that it is still “reviewing the proposed new policy to understand what effect it will have on international students.”)

It was the middle of the night for her parents in the Philippines when Alice learned about the ICE announcement on Monday afternoon. She hesitated to call and wake them. When they did speak for her birthday call, she says she couldn’t bring herself to tell them because she was “too confused and emotional to talk about it in a way that wouldn’t just cause panic.” She told them Tuesday so they could work to prepare for all possible scenarios.

If Alice does have to return to the Philippines, she would have to navigate a 12-hour time difference for her studies. For her and other students, ICE’s new guidance would mean breaking leases, securing stable internet access, making travel arrangements during a global pandemic and for some — a recognition that they cannot feasibly continue their studies.

“We’ve been threatened with this devastating upheaval and we just have no idea whether it’s even going to happen or when to expect it,” Lewis, a Harvard PhD physics student from Australia who is also a member of the university’s graduate students union, tells TIME. He asked to withhold his full name because of fears about his immigration status. Lewis says he is worried about canceling the lease on his house and the effect on his research. “I really can’t do my research unless I’m here.”

Harvard president Larry Bacow said in a statement emailed to TIME that the school is “deeply concerned” that the recent ICE guidance “imposes a blunt, one-size-fits-all approach to a complex problem, giving international students, particularly those in online programs, few options beyond leaving the country or transferring schools.” The American Council on Education, a higher education lobbying group and major coordinating body for more than 1,700 of the nation’s colleges and universities, said in a statement that “on its face,” the new ICE guidance is “horrifying” and “unfortunately does more harm than good.”

John, a Harvard undergraduate student whose family lives in Lebanon, tells TIME he’s “not exactly sure what’s going to happen” and hopes the university finds a way around it. He asked for his name to be changed because of fears about his immigration status.

John says he doesn’t want to go back to Lebanon before he graduates because the country is facing an unprecedented economic and political crisis. “In Lebanon, even the most basic things may not be available within the next month or two,” John says. “Right now, we do have electricity but it’s projected that within two months the country is going to go into a crisis where no fuel is even available to even have proper electricity or internet for that matter.”

Universities are scrambling to respond to the news. Sarah Pierce, a policy analyst at the Migration Policy Institute, says that the vague ICE guidance has put “a massive amount of pressure” on universities to “scramble together a plan by mid-August to decide whether or not they’ll offer a sufficient number of in person options for students to continue to qualify for student visas.”

Greg Siskind, an immigration attorney based in Tennessee, says he anticipates that schools could brainstorm creative ways to comply with the guidance without requiring international students to leave. “My guess is that there will be an attempt by a lot of schools to figure out a way to comply with this safely,” Siskind says. “There’s not a ton of explanation yet from ICE regarding what they consider (as compliance) so in the absence of that a lot of schools are going to have to make their own call whether it meets the letter of the new rule or not.” Some options could be to hold in-person classes that provide an option to be streamed or have online classes but an in-person socially distant exam, he notes.

Some professors have taken to social media to offer up the possibility of offering in-person independent studies to international students in order for them to me ICE’s requirements to remain in the country. Some universities have also announced working with students one-on-one to ensure they meet the federal requirement.

Legal experts tell TIME that ICE’s announcement falls in line with previous efforts by the Trump Administration to curb immigration, especially during the COVID-19 pandemic. “This is another way in which they can use COVID to exercise their discretion and limit access to the United States,” Karla McKanders, professor of law and director of the Immigration Practice Clinic at Vanderbilt Law School, tells TIME.

At the start of the outbreak in the U.S., for example, the Administration began a travel ban from countries with high case counts of COVID-19. On April 20, President Trump tweeted that he would be signing an executive order to temporarily suspend legal immigration to the U.S. as part of an effort to “protect the jobs” held by American citizens.

“The rhetoric of the administration has focused on targeting undocumented immigrants, but now legal immigrants — those who have valid visas — are under increasing attack,” says Elora Mukherjee, professor of law at Columbia Law School and director of the school’s Immigrants’ Rights Clinic. “It’s appalling.”

International students bring revenue to both U.S. universities and the economy in general and, during the 2018/2019 academic year, contributed $41 billion and supported 458,290 jobs to the American economy, according to NAFSA, a U.S.-based association committed to advancing international higher education. The tuition international students pay to U.S. colleges helps subsidize financial aid for American students.

Pierce says it’s not just college students the U.S. is at risk of losing but also the “innovation and future contributions of these individuals.” The administration is effectively “cutting off a stream of employment based immigration at its source by enacting this policy change,” Pierce says.

Still, while colleges rush to navigate ICE’s vague and far-reaching guidance, students are left largely in the dark.

Sofia Avila, a Stanford undergraduate student from Mexico, tells TIME she was in the middle of a meeting at her consulting internship when she read up on the ICE guidance and couldn’t hold back tears. “It’s incredibly confusing. A lot of these policies, I’m just like — what does this wording mean? What does it mean for me?” Avila says.

As it stands, Avila’s understanding is that she has to leave. And it’s not just her education that she’s worried about. “The people that I love — a lot of them are here,” she says.

Write to Sanya Mansoor at sanya.mansoor@time.com and Jasmine Aguilera at jasmine.aguilera@time.com. 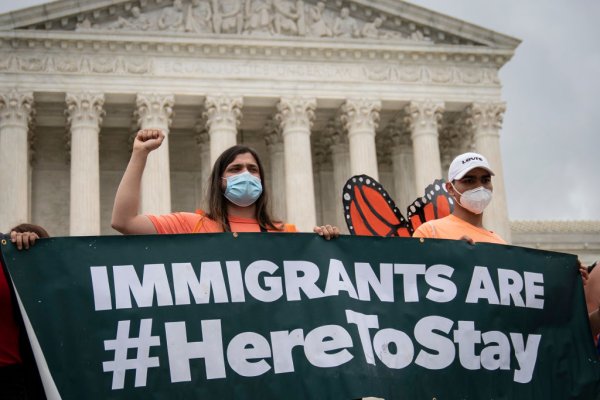