Brazil's President Jair Bolsonaro speaks during the sworn in ceremony for newly appointed Minister of Communications Fábio Faria amidst the coronavirus pandemic at the Planalto Palace on June 17 2020 in Brasilia.
Andressa Anholete–Getty Images
By Simone Iglesias and Murilo Fagundes / Bloomberg

Brazil’s President Jair Bolsonaro has undergone another test for Covid-19 after showing symptoms of the virus.

Bolsonaro said an exam showed his lungs are “clean” and that he would test for the coronavirus again. “But everything is fine,” he told supporters as he arrived at the residential palace, according to a video broadcast on a YouTube channel.

The presidential office confirmed Bolsonaro was tested Monday night at a Brasilia hospital and said results would be available on Tuesday. The president is currently in good health condition, according to a statement.

Bolsonaro had a light fever and is taking hydroxychloroquine, a medication he has been touting to combat the coronavirus but that so far has unproven efficacy against it, according to CNN Brasil.

Bolsonaro could be seen coughing during a Thursday broadcast on his social networks, when he sat next to six other people, none of whom wore a mask. Those included Regional Development Minister Rogerio Marinho and the chief executive officer of state-owned bank Caixa Economica Federal, Pedro Guimaraes. Since then, he has mingled with members of his administration and the general public, and had lunch with the U.S. ambassador to Brazil on Saturday.

It is not the first time Bolsonaro has been tested for Covid-19. In March, after multiple members of his delegation to a U.S. visit contracted the virus, he said he tested negative. Since the beginning of the pandemic, he has disobeyed several recommendations from the World Health Organization and experts to avoid contamination by the coronavirus, such as avoiding crowds, wearing face masks and maintaining social distance.

On June 25, he said during a Facebook live event that he thought he had already contracted the virus.

As of Monday, Brazil had 65,487 confirmed deaths from the virus and more than 1.62 million total cases. 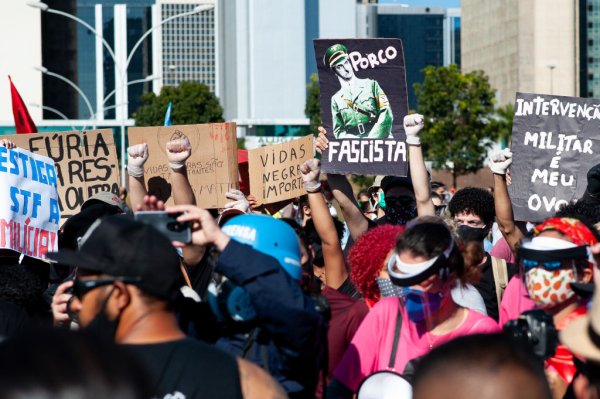 Brazil's Government Accused of a 'Statistical Coup' After it Limited Publishing of COVID-19 Data
Next Up: Editor's Pick