"The Words of a President Matter." Biden Says We Can't Heal COVID-19 Without Healing the Country First

US Democratic presidential candidate Joe Biden leaves after speaking about the coronavirus pandemic and the economy in Wilmington, Delaware, on June 30, 2020.
Brendan Smialowski—AFP/Getty Images
By Charlotte Alter

In a major speech Tuesday, former Vice President Joe Biden described his plans to tackle the COVID-19 pandemic, slammed President Donald Trump’s response to the crisis, and once again modeled a vision of competent, compassionate leadership that forms the foundation of his Presidential campaign. Biden positioned the pandemic as the kind of threat that can only be addressed by a united effort, and argued that Trump’s divisiveness made him incapable of handling the crisis.

He started off with a searing recounting of all the times he had sounded the alarm about COVID-19, and all the times Trump ignored the threat of the virus. He made some news by announcing that his campaign was assembling a list of Black women for SCOTUS picks. He also called Trump’s response to the Russian bounty intelligence a “dereliction of duty,” and explained that he supported the removal of Confederate monuments but not memorials to American Presidents like Washington or Jefferson.

Over and over, he returned to the central theme of his campaign: American unity, and the President’s unique ability to create or destroy it.

“It seems like our wartime president has surrendered, waived the white flag and left the battlefield,” said Biden, speaking in a Wilmington, Delaware high school in front of a massive American flag. “Today, we’re facing a serious threat, and we must meet it as one country. But the President gives no direction, and he pits us against one another. We can’t continue like this: half recovering, half getting worse. We can’t continue half wearing masks and half rejecting scientists. We can’t continue half with a plan, and half just hoping for the best.”

His campaign circulated details of his plan for addressing the pandemic, building off the plan he released in March.

First, testing: Biden’s plan includes a massive testing surge to guarantee regular and free testing, doubling the number of testing sites to eliminate lines entirely, and hiring 100,000 Americans for a contact tracing workforce. Second, protecting medical workers: the Biden campaign is promising to fully utilize the Defense Production Act to surge production of PPE, boosting pay for medical workers putting their lives at risk to fight the virus, and offering paid family leave for anyone sick with COVID-19 or caring for a sick loved one. “The steps you’ve taken so far haven’t gotten the job done, Mr. President,” said Biden. “Fix the shortage of PPE for our healthcare workers before you tee off another round of golf.”

Third, accelerating treatment and vaccines: Biden vowed to restore the U.S.’s good relationship with the World Health Organization, ramp up large-scale testing of possible vaccines, and establish an Emerging Infectious Disease Clinical Trial Network to bring the best scientific brains together to find a cure. “We should be leading a coordinated global approach on the science, not disregarding experts while pushing dangerous and disproven drugs as if they’re treatments.”

Fourth, safe reopening: Biden proposes creating a firm set of rules for employers to keep workers safe, support small businesses in retaining and rehiring workers, and coming up with safe standards to help schools and childcare centers re-open. He also plans to create a Nationwide Pandemic Dashboard so Americans can check on the virus’ spread in their neighborhood, boost Social Security by $200 a month and increase SNAP benefits by 15%. “We need real guidelines, with uniform nationwide standards, to help us chart our economic reopening,” he said. “The state-by-state approach will only produce confusion and slow any progress.”

Biden had unveiled many of these proposals before, and rehashing the details wasn’t the point of the speech. Instead, the former Vice President took the opportunity to present not only a coherent and unified response to the pandemic, but a coherent and unifying approach to the Presidency.

When asked by a journalist about reports that Russians offered the Taliban bounties on the lives of American soldiers, Biden took the opportunity to turn the tables on Trump’s frequent allegation that Biden is too old and “cognitively impaired” to be President.

“He wants to talk about cognitive capability, he doesn’t seem to be cognitively aware of what’s going on,” he said. “He either reads and or gets briefed on important issues and he forgets them, or he doesn’t think it’s necessary that he need to know it.” Biden called either possibility a “dereliction of duty,” and said that if the allegations are true, Trump is “unfit to be President of the United States.”

Another reporter asked Biden to comment on the recent spate of protests demanding that monuments to American figures with racist pasts be removed.

“Comparing whether or not George Washington owned slaves or Thomas Jefferson owned slaves, and somebody who was in rebellion committing treason, trying to take down the Union to keep slavery, I think there’s a distinction there,” he said. “I think all those Confederate monuments to Confederate soldiers and generals who strongly supported secession and the maintenance of slavery and going to war to do it, I think those statues belong in museums, they don’t belong in public places.”

But in between answers on Russia, Confederate monuments, and gently batting away questions about his vice presidential pick, Biden continued to return to the message that has been central to his bid from the primary through the pandemic: that unity is the only way to solve the nation’s problems, and that the President’s rhetoric is the most powerful tool for either uniting the country or dividing it.

“I think the way to get it on the same page is to lower the rhetoric based on division. Stop appealing to the less healthy side of society,” Biden said. “I think we have to start appealing to the better side of human nature by pointing out that that mask is not so much to protect me, it’s to protect you against me. It’s called patriotism. It’s called responsibility, it’s called making sure you look out for the next person.”

“The words of a President matter, no matter who the President is, no matter how responsible or irresponsible the President is,” he continued. “A President, whoever he or she is, can take us to war or bring peace, can have markets rise or fall, appeal to the seedier side of humanity, or to our better angels. It matters, it really matters, and so I think it’s about the tone.”

When asked if he was preparing to debate Trump, Biden responded with obvious relish: “I can hardly wait.” 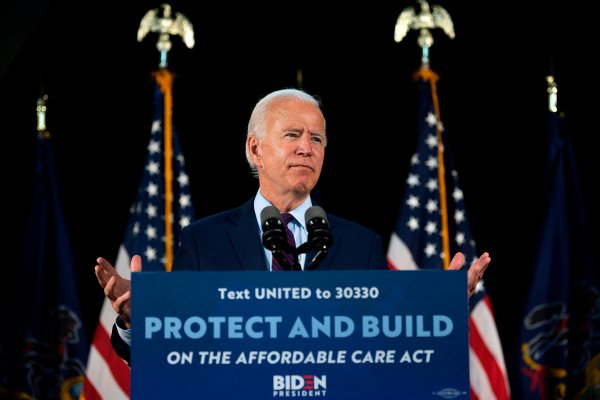 Trump Is Trying to End Obamacare
Next Up: Editor's Pick