'A Pandemic Upon an Epidemic.' Syringe Services Struggle to Provide Care to Those Battling Drug Addiction Amid COVID-19

Americans who struggle with drug addiction have turned to syringe services programs (SSPs) for decades—not only to exchange used needles for clean ones but also as a first step towards treatment. Avoiding reusing needles reduces the risk of contracting infectious diseases like HIV and hepatitis C. But the coronavirus pandemic has made it more difficult for participants to get clean needles as sites shut down or reduce their operating hours.

In a pre-COVID world, many of these programs provided a safe place for drug users to gather and build trusting relationships that can pave the way to treatment. With social distancing restrictions in place, it’s harder for clients—who include low-income and homeless people—to feel connected to what may be the closest thing they have to a primary care doctor. The U.S. Centers for Disease Control and Prevention says that new users of SSPs are “five times more likely to enter drug treatment and three times more likely to stop using drugs than those who don’t use the programs.”

At Prevention Point, a Philadelphia-based harm reduction program that offers syringe exchange, clients would previously come into the building, get a cup of coffee, interact with staff and access a variety of services. “Now, you can’t do that,” says Jose Benitez, executive director of Prevention Point. “It’s very transactional compared to where we were in terms of relationship building.”

Prevention Point typically operates out of a former church but since the pandemic it has moved everything, including syringe and meal services, to the sidewalk with the exception of providing limited drop-in and medical appointments in the building.

As the pandemic continues, the nation’s drug overdose crisis appears to be worsening. The American Medical Association (AMA) warns that more than 40 states have “reported increases in opioid-related mortality as well as ongoing concerns for those with a mental illness or substance use disorder.” Nearly 72,000 Americans died from drug overdoses in 2019, according to provisional data released last month by the CDC; that’s a new peak for annual overdose deaths in the country. What’s more, The New York Times reported on July 15 that drug deaths in 2020 had so far increased by an average of 13 percent compared to last year after analyzing mortality data from local and state governments that included 40% of the country’s population.

“Tragically, the CDC’s 2019 data shows that an increase in drug overdose deaths started before COVID-19, and 2020 data so far suggests the pandemic will accelerate the trend,” says Daliah Heller, director of drug use initiatives at Vital Strategies, a global public health organization with headquarters in New York City. “For people who use drugs, COVID-19 is a pandemic upon an epidemic,” Heller says.

There’s widespread evidence that SSPs are effective public health interventions. They provide clean syringes and naloxone (a medication that can reverse the effects of an opioid overdose) for free; support services like referrals for substance-use-disorder treatment; conduct HIV and hepatitis C testing; and teach community members about how to prevent and respond to an overdose. Research shows they don’t increase illegal drug use or crime and save health care dollars in the long run. The CDC’s interim guidance states that SSPs should be considered essential because they can “reduce overdoses and transmission of infectious disease” as well as “help detect COVID-19 cases and prevent additional cases.”

Even before the coronavirus pandemic, such programs were underfunded. And in recent months, they have been forced to dramatically scale back their operations. Many adapted by stopping HIV and hepatitis C testing, which requires direct contact, and have begun relying more on outreach and delivery services to distribute naloxone and syringes when possible so participants don’t need to visit as frequently.

Jose Garcia, an injection drug user, deposits used needles into a container at the IDEA exchange, in Miami on May 6, 2019.
Lynne Sladky—AP

In July, advocates for safer drug use sent a letter spearheaded by Drug Policy Alliance, a national drug policy reform organization, to congressional leaders in the Senate. The letter called for emergency funding to be put towards SSPs in the next major coronavirus relief package. It highlighted expected revenue shortfalls in state and local budgets that usually support these programs and the increase of new pandemic-related costs, like personal protective equipment. Failing to fund SSPs will result in preventable deaths, the signatories argue. In the absence of significant federal funding, groups like Vital Strategies are trying to minimize the harm of the pandemic on those who use drugs by sharing informative materials like a COVID-19 resources toolkit.

The AMA, meanwhile, has called on states to remove barriers to SSPs, including strict requirements that only one clean needle can be given out in exchange for one dirty needle. The AMA recommends that states adopt measures similar to one recently approved by Maine, which increases access to clean needles by allowing individuals to receive more than one clean needle if they give in one used needle. Heller says short-term changes, like supporting mail-order naloxone, are needed, too.

Prevention Point is one of many SSPs that lack protective equipment for staff and clients. The organization is fundraising by requesting online donations as well as applying for state and federal grants for $520,000 worth of PPE to outfit their staff from March until December and has not yet met that goal, having only raised around $154,000 as of July 16. Still, the program is distributing significantly more syringes than it did last year. In the first half of 2019, Prevention Point gave out almost 1.8 million syringes; in the first half of 2020, it gave out more than 3.7 million syringes.

“My sense of what’s happening on the street is nothing’s on hold and it’s business as usual,” Benitez says.

Jennifer, a 45-year-old mother of three, is one of thousands of drug users who exchanges used needles for clean ones at Prevention Point. Jennifer (who declined to provide her last name citing the stigma of drug use and its impact on her safety) said that after the pandemic began, when meeting others who are still using drugs, they often have hand sanitizer and masks, try to keep their distance and avoid sharing sodas or cigarettes.

The needles Jennifer collects from Prevention Point aren’t just for herself. She’s a hitter, which means other users who either don’t know how to use a needle or want a shot in the neck to get a better rush will pay her to inject them. Although Jennifer and those she injects continue to use drugs, this is a safer way of using, thanks to the clean needles she gets from Prevention Point.

Jennifer also volunteers with Prevention Point to pick up used—and potentially infectious—syringes off the street to give to staff members that can safely dispose of them.

Some normalcy is returning as coronavirus restrictions lift. Prevention Point’s syringe services, which had cut back operating hours, are now back to operating six days a week and they have resumed HIV and hepatitis C testing after a hiatus.

Amid the coronavirus pandemic, 43% of 173 syringe service programs that responded to a survey by the University of Washington, New York University and the North American Syringe Exchange Network (NASEN) between March 31 and April 16 said they had decreased services; one-quarter reported the closure of one or more sites. Sara Glick, lead author of the report, says researchers are continuing to monitor how SSPs respond to the pandemic. While she has heard of more programs reopening since the initial shutdown, she doesn’t yet know the scope and extent of those reopenings.

Almost a quarter of programs surveyed said they were providing delivery services and 6% said they were providing mail-based services. The survey also found that many SSPS were referring clients to COVID-19 testing stations and serving as a trusted source of information for vulnerable populations grappling with misinformation. Some have come up with creative ways, like a comic book-style guide to COVID-19 prevention, to communicate with their clients. The CDC recommends that SSPs conduct COVID testing through partnering with the local health department or health care organizations, if possible.

Since the pandemic, the Southern Tier AIDS Program in New York, a nonprofit that provides HIV/AIDS services, has had to cut some services at its six office sites throughout upstate New York, while ramping up home deliveries of syringes and naloxone. Since the gradual lifting of some coronavirus restrictions in Binghamton, where the program is based, as well as in the eight counties it serves, Southern Tier AIDS Program is “not quite as locked down” as it was at the beginning of the pandemic and is gradually decreasing its reliance on home delivery, says John Barry, executive director of the program. Things are still “nowhere near normal,” he adds.

Programs in big cities are adapting, too. For example, VOCAL-NY, a statewide grassroots organization that helps low-income people affected by HIV/AIDS, runs a syringe services program out of Brooklyn. When the pandemic struck New York City, the organization started providing people with personal protective equipment and hand sanitizer.

Braunz Courtney, executive director of HIV Education and Prevention Project of Alameda County (HEPPAC), which is based in Oakland, California and operates a syringe exchange, said in a July 29 webinar hosted by the CDC, NASTAD and the Harm Reduction Coalition that with many public sites shutting down, participants were complaining that they weren’t able to shower or clean up. “They were like—I just need a place to wash my hands and I was like woah, it’s on that level,” he says. So HEPPAC bought five portable hand-washing stations.

Louise Vincent, executive director of North Carolina Survivors Union & Urban Survivors Union—a grassroots coalition of current and former drug users that work on drug advocacy—helps operate an SSP in Greensboro, N.C. Vincent said that in May the program was “seeing more people than we’ve ever seen. I would say almost quadruple” and that the number of participants visiting their site continues to be above average, compared to the same time last year. She thinks it’s because more people are using drugs as they struggle with mental health issues. “This kind of isolation is deadly,” she says.

Vincent worries about how the site will operate during winter, when many of their services are typically centered around gathering in a warm space and providing food. “We have got to figure out how we are going to reach people,” she says. “We haven’t figured this all out yet. It’s absolutely the case that we’re not able to provide the services like we want to.”

Vincent has fought her own battles with addiction and worked in the harm reduction space for decades. She finds it difficult to not be able to provide the full range of services to those in need.

“I hate to be yet another person that says: I’m sorry you can’t come in,” Vincent says. “People need love, warmth and connection while still social distancing but if we don’t model it, people won’t take it seriously.” 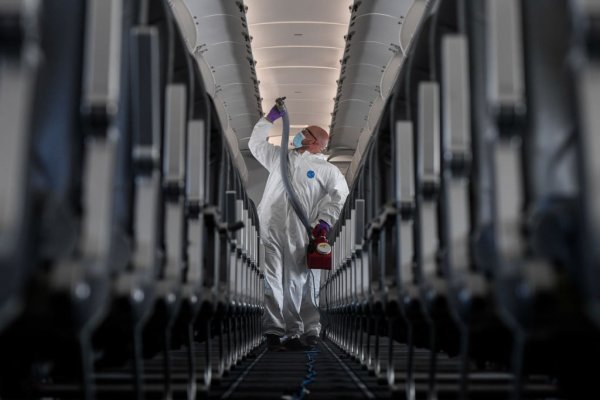 You Might Not Catch Coronavirus on an Airplane. But Air Travel Is Still Probably Spreading COVID-19
Next Up: Editor's Pick