Leaders of both parties pressed on Sunday for answers from the White House about reports that Russian President Vladimir Putin had put bounties on U.S. troops in Afghanistan and that the U.S. had taken no action in response. Democrats called for hearings to be held.

In his first comment on the matter, President Donald Trump tweeted Sunday that “nobody briefed or told me” about the “so-called attacks,” a comment that his former national security adviser termed “remarkable.”

The New York Times reported Friday on the alleged actions by Russian military intelligence — paying Taliban-linked militias to kill American and British troops — and that Trump and other top White House officials had been briefed on the matter months ago. Major elements were also reported by the Washington Post.

In a follow-up story Sunday, the Times wrote that commandos and spies on the ground in Afghanistan had reported their findings to superiors in January and that they had first grown suspicious after discovering a large stash of U.S. dollars at a Taliban outpost. The U.S. military was reviewing attacks on Americans for possible links to the alleged Russian incentive plan, the Times said, while the Washington Post said the bounties likely resulted in the deaths of several U.S. service members.

Representative Liz Cheney of Wyoming, the third-ranking Republican in the House, on Sunday appeared to accept Trump’s comment as true. In a tweet she called for an explanation of “who did know and when,” and asked if the topic had been raised in the PDB, or the president’s daily brief. Representative Dan Crenshaw of Texas retweeted Cheney, adding, “we need answers.”

A key Trump ally, Senator Lindsey Graham, said on Saturday it was “imperative Congress get to the bottom of” the allegations about Russia.

“I expect the Trump administration to take such allegations seriously and inform Congress immediately as to the reliability of these news reports,” the South Carolina Republican said on Twitter. Graham golfed with Trump on Sunday in Virginia.

House Speaker Nancy Pelosi said Sunday she wasn’t aware of the intelligence about the Russian bounty on U.S. forces in Afghanistan, but “we have called for a report to the Congress on this.”

“This is as bad as it gets, and yet the president will not confront the Russians on this score, denies being briefed. Whether he is or not, his administration knows,” Pelosi said on ABC’s “This Week.”

Senator Tim Kaine, Democrat of Virginia, questioned Trump’s continued friendly relationship with Putin, including his call for the Russian leader to be present at the next G7 meeting, “all while his administration reportedly knew Russia was trying to kill U.S troops in Afghanistan.”

Rhode Island Democrat Jack Reed, the ranking member on the Senate armed forces committee, said the apparent lack of a response by Trump to the alleged Russian bounties had put U.S. troops in Afghanistan in further danger. “The U.S. must hold accountable anyone who targets our troops,” he said.

In a letter requesting that hearings be held as soon as possible, Senator Tammy Duckworth dubbed the president’s inaction a betrayal of the U.S. military. A veteran, Duckworth is often mentioned as a possible vice presidential pick for Joe Biden, Trump’s presumptive rival in November’s election.

“Members of the U.S. Armed Forces, military families and the American people deserve answers and accountability for President Trump’s outrageous failure of leadership and apparent betrayal of our troops,” the Illinois Democrat wrote to James Inhofe, the Republican chairman of the armed services committee.

Former National Security Adviser John Bolton, on NBC’s “Meet the Press,” said it was “pretty remarkable the president’s going out of his way to say he hasn’t heard anything about it, one asks, why would he do something like that?”

“He can disown everything if no one ever told him about it,” Bolton said. “It looks like just another day in the office at the Trump White House.”

Bolton said he didn’t know the quality of the intelligence on the Russian bounty plan, or the extent of it. And not all information that flows through the many U.S. intelligence agencies is passed on to the commander-in-chief, Bolton noted.

“There needs to be a filter of intelligence for any president, especially for this president,” he said.

Asked why Trump is often defensive of Putin, Bolton said he didn’t read anything into it, necessarily. “I just don’t know what to say other than if he likes dealing with strong authoritarian figures.”

Bolton is in the middle of a media blitz to promote his tell-all book depicting the president as consistently prioritizing his own re-election, even above national security. On NBC he repeated a contention that while he won’t vote for Trump in November, he won’t vote for Biden, either.

Bolton paints Trump in the book as ignorant, easily manipulated by foreign leaders and unfit for office. Trump has fired back, calling the book “lies” and tweeting that Bolton is “wacko” and a “disgruntled boring fool.”

–With assistance from Shawn Donnan. 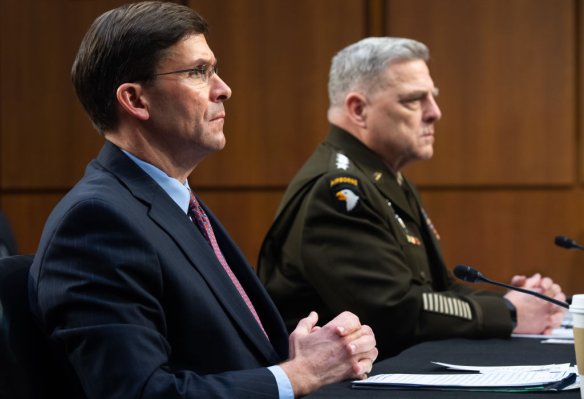 Military Leaders May Have to Choose Between Trump and Troops
Next Up: Editor's Pick