Judge Chile Eboe-Osuji, President of the International Criminal Court makes a speech during the 18th session of the ICCs Assembly of States Parties, in The Hague, Netherlands on Dec. 2, 2019.
Abdullah Asiran—Anadolu Agency via Getty Images
By Kimberly Dozier

Judge Chile Eboe-Osuji, president of the International Criminal Court, tells TIME that as far as he is aware, the Trump Administration has not yet acted on its June 11 threat to sanction members of the court or their family members, or block their visas, for its investigation into alleged war crimes by U.S. military and intelligence personnel in Afghanistan.

But the judge says even the threat of such action may have a chilling effect on the only court in the world permanently authorized to prosecute individuals for war crimes including genocide, because private companies or human rights organizations may become U.S. targets just by cooperating with the court’s inquiries.

Judge Eboe-Osuji says he was also not aware that the U.S. Justice Department was investigating the actions of his court, as indicated by Attorney General William Barr’s announcement in June that the U.S. had received “substantial, credible information that raises serious concerns about a long history of financial corruption and malfeasance at the highest levels of the office of the (ICC) prosecutor.”

Speaking to TIME from the Hague on June 26, Judge Eboe-Osuji appealed to the Trump Administration to return the U.S. to its past as a shining “city on the hill,” that sets the example for other democracies to follow.

He said he has no contact with the Trump Administration since the June announcement, but is hoping pressure from the 67 states including Britain and Australia, who have backed the court in defiance of the U.S. action — and pressure from Americans themselves — might convince the Trump Administration to cease its attacks on the “court of last resort.”

TIME: The Trump Administration announced sanctions and visa restrictions against your personnel who may be part of an investigation into U.S. actions in Afghanistan. They took the U.S. visa away from your Chief Prosecutor Fatou Bensouda a year ago. But have they done anything since they made this announcement in early June this year?

The prosecutor and three of the staff members of her office were named in the travel restrictions, and the executive order says that people may be named without being told in that plan. So we don’t know whether something else has happened that we haven’t been told.

It’s one thing to call courts of law names. That’s something judges and courts endure all the time in every country…. But to begin to threaten or to adopt an executive order that says…at any time, people can be named on the list without notice, it’s really something we think is way, way, way beyond the pale.

For the court officials themselves, we are resolved to do the work…. The concern is always whether there are external people, companies, human rights workers…who may worry about this and feel frightened by it…. If we have external bodies, like companies who keep us supplied with logistics, equipment, and services, if they feel that this may be something they need to worry about, and then they feel the chill of sanctions, and that’s where the difficulty is.

U.S. Attorney General William Barr said that there was evidence of some sort of misbehavior by the ICC. Were you aware of any sort of U.S. investigation into your actions?

Absolutely not. We heard that for the first time, the same time you heard it. Again, it’s one of those you don’t know whether there’s something to it, or it’s the usual kind of scare campaign that has accompanied these threats. All I can say is that we have a strong mechanism of dealing with behavior on the part of staff and officials…. Beyond that, it is a crime under the Rome Statute itself to engage in corrupt behavior.

The U.S. president has called you a national security threat because of the investigation by your Chief Prosecutor into U.S. actions in Afghanistan, and because of her research into possibly investigating what she considers war crimes in the West Bank and Gaza. Why did the court choose to pursue those cases?

On the Afghanistan issue, let me put it in stark terms. People often asked me why is that case important? I’ve been asked the question, isn’t it a political case, isn’t it, you know, equal opportunity justice you’re seeking here?… because the court has been accused in the past of concentrating a lot on African states. Now, they want to diversify their reach.’

The short answer to that question is this: Over 30,000 people have been killed in that war…. Isn’t it a political investigation?…Is a prosecutor supposed to tell the victims, ‘Sorry….so many of you have died and all sorts of other things happened to you. But sorry, we can do nothing about it because if we do, someone will yell at us?’

You are the court of last resort. Are you saying that the Afghan legal system and the U.S. legal system have failed to adequately investigate these potential crimes and hold people responsible and committed them?

Absolutely. That’s the point. That’s the entire point. The point was, the victims came because they haven’t received justice all along in that long, harrowing war. And they come to the ICC prosecutor saying this thing has gone on for too long. Nobody is caring about us and the justice that we crave. The ICC, as a court of last resort, has to do something about it. What needs to happen on the part of the … U.S. authorities is to say, ‘ICC, you go away, we will do it ourselves, or we have done it ourselves.’ But nobody is saying that. All they’re saying is, ‘No, go away.’

Afghanistan has now stepped up saying they want to do it…. So that is still under consideration between the prosecutor and the judge is concerned to see whether or not they will indeed say, ‘Afghanistan, OK, the ICC will stay action to give you time to do it.’ …Then they have to come and show the judges that they’re really doing it.

Judge Eboe-Osuji noted that the ICC has not yet ruled whether it has jurisdiction to act on a Palestinian Authority request to investigate possible war crimes by Israel in Gaza, the West Bank and East Jerusalem.

The ICC has cost $1.5 billion and counting since its founding in 2002, and has only produced eight convictions. Does the court present a real threat to people committing crimes of genocide with that record?

Everybody keeps talking about $1.5 billion, over 18 years of operation. When you break that down, you’re getting something like $112 million or so a year…less than the budget of the police department of a mid–sized city in the United States. So that’s not a lot of money…in the broader scheme of things for an international organization that’s supposed to have this mandate.

What we do is we’re a court of justice. We are not a factory that manufactures convictions…. We operate on the basis of the evidence and the law, the standard of proof. We don’t compromise on that…. We call it proof beyond reasonable doubt. If the standard is not met, the judges will acquit and that is also justice being done.

But with your track record of only eight convictions, is that enough of a deterrent to people who commit war crimes, to fear your court?

We should not be feared… We are hoping that everyone will see this place as a place where when the bad acts are committed, eventually, those who commit them will answer questions of accountability. And that gives victims hope.

We began in Rwanda [with the UN Security Council’s creation of International Criminal Tribunal for Rwanda], where for 29 years, there were strongmen who have the power over life and death, and there was no place to complain to if he did something wrong. But now we have a place where victims can go and complain for violations of their rights…what I call loosening the grip of tyranny on our humanity. It is not an absolute panacea, a magic wand, and people will stop committing crimes… But we think that people know that with the ICC in place, they are being more careful.

With the U.S — and also Russia, China, India — all resistant to the court’s work, does it still have relevance?

That question is ironic in the sense that here we were discussing a minute ago whether or not the court is a threat to the national security of the most powerful country in the world. Of course, that is, we know, hyperbole to the extreme to characterize the court in those terms. But the fact that all this is happening because…they are troubled by what the court is doing, maybe that’s one way to answer to that question.

What signal do you think it sends to the world – and to people who would commit war crimes – that the U.S. is attacking the ICC this way?

If your question is whether there are people who may feel enabled by this conduct, of course, that’s the case. But that’s reason why we hope that the American citizens will join in urging the government to rethink this approach to justice.

So far, the U.S. has done that in showing respect for the rule of law, judicial independence, creating international criminal justice for the world. But this goes against everything they’ve done in those regards. And that is very, very worrying. 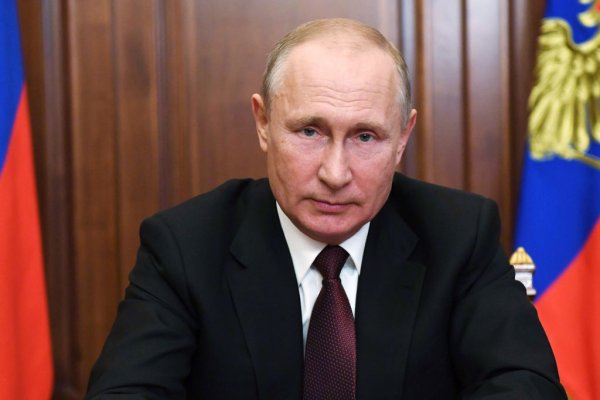 U.S. and EU Officials Are Worried About Putin and Ukraine
Next Up: Editor's Pick