As Texas and Florida Bars Close Down, Bartenders Fear the Worst

Nick Hill was excited to get back behind the bar. In late May, the bartender and student at the University of Texas Rio Grande Valley had been cooped up and living on unemployment for months. When his local Brownsville Irish pub decided to reopen over Memorial Day weekend, Hill jumped at the chance, especially because the impact of COVID-19 on his city had thus far been low.

“I felt perfectly safe, because I was like, ‘there’s no way I’m going to get coronavirus,’” Hill says. His bar opened at 25% capacity, and then doubled that a couple weeks later, with regulars streaming in.

In early June, a rumor began to circulate that a local bartender had become infected. Soon, waitstaff at Chili’s had also tested positive, forcing the location to close. Because bartender circles in the city are close knit, Hill decided to get tested—and he, too came up positive, along with, he says, other employees at his bar. Hill says the bar, which he declined to name, shut down temporarily as cases in Brownsville ballooned.

Then on Friday, governor Greg Abbott conceded defeat to the virus when he once again shut down bars and scaled back restaurant dining. Hill, meanwhile, has been quarantined at home for more than a week, recovering from a nasty cough and nighttime fevers.

“In hindsight, it was obviously a bad idea,” Hill says. “Everyone in the valley is freaking out now, taking it seriously.”

Similar scenes are playing out across the nation. The national count for new infections is higher than it’s ever been, with 30 states currently trending upward. Younger people are making up a growing percentage of these cases. And health officials are linking some clusters of outbreaks to bars, where patrons, eager to shake off the solitude and boredom of quarantine, have reemerged in full force. From Boise to Miami to Scottsdale, photos have captured revelers packing into bars without a face mask in sight. On Friday, Florida also suspended alcohol consumption in its bars after seeing a sharp uptick in cases.

This situation has been a nightmare for many bartenders, who are forced to juggle conflicting responsibilities: of earning a living after months of unemployment; of keeping their patrons safe without alienating them; of facilitating both a relaxed ambiance and a squeaky-clean environment. Now, many are worried that the fate that befell Texas and Florida could happen everywhere, throwing an already-fragile industry even deeper into prolonged crisis.

LaShan Arceneaux, the vice president of the Houston chapter of the United States Bartenders’ Guild (USBG), advises bartenders to use this time to think about making a living in an adjacent field—like working in a distillery—or doing something else entirely. “This is the downtime to train yourself in something else–learn a new skill,” she says. “I think COVID has shown that the bar industry nationwide is broken.”

‘All I Can See Is Germs’

There are more than 600,000 bartenders in the country, according to the U.S. Bureau of Labor Statistics. Many aspects of their job—the social and physical nature of their workspaces, low base salaries, unreliable shift assignments, and frequent lack of health insurance—make them disproportionately vulnerable to the coronavirus.

In March, as the coronavirus shut down bars and restaurants across the country, the USBG National Charity Foundation saw the number of applications for their emergency assistance program skyrocket from 5 applications a month to 50 a minute. In total, 300,000 applications streamed in since the beginning of the crisis, according to USBG board chairman and national president Kyle McHugh.

The foundation scrambled to pull together a fundraiser, and has doled out $9 million to 30,000 bartenders across the country. But McHugh says that the program’s funds are running low once again, and that there are still tens of thousands of bartenders whose applications have been approved but not paid out. “We have some real need out there that we just don’t have the dollars to pay,” McHugh says.

Given this need, it was unsurprising to McHugh that many bartenders returned to work once their states announced reopenings. Another factor that made it difficult not to return was that if bartenders chose to stay home, they would lose their ability to collect unemployment. “A lot of our members of the hospitality community didn’t feel like they had a choice,” McHugh says.

To mitigate the risk factors, some bartenders and owners set strict rules upon arrival. At Bar Mateo at Zinc Cafe & Market in Los Angeles, for example, a plexiglass was installed separating bartenders from guests; garnishes were moved from the bar top to behind the counter; stools were removed entirely. In Florida, Kristina Page returned to her Panama City, Fl. bar with a mask and a self-imposed rule to remain behind the bar as much as possible, eschewing table service.

But Page didn’t anticipate the volume or attitude with which patrons would arrive. “It’s starting to just get busier and busier, because a lot of people are still not working,” she says of her day shift. “And when happy hour begins, it gets really nerve wracking. Basically, all I can see is germs.”

Page, who has been a bartender for over 30 years, is particularly nervous about the younger clientele that arrives in the evening and is now statistically contracting the coronavirus in greater numbers. “They don’t have a care in the world,” she says. “They’re leaning on each other, talking in each other’s faces—the things that drunk people do.” Over the last 30 days, the number of cases in the surrounding Bay County has more than doubled.

When patrons act recklessly, bartenders are thrust into agonizing situations, since a confrontation runs the risk of angering the very people responsible for giving them most of their earnings. McHugh says that he’s heard stories of patrons who threaten violence when asked to wear a mask. In Wilton Manors, Florida, a bartender’s request that a patron wear a mask led to the patron spitting on him.

Back in Brownsville, Hill says he had to deescalate a situation with one customer who got increasingly agitated as his meal went on. “When I served him his whiskey in a plastic cup, he was like, ‘’This is so stupid—Crown Royal is a premium beverage. I can’t believe this sh*t,’ Hill says. “It was really funny.”

Even when bartenders implement strict safety measures and get patrons to follow in-house rules, they’re still very much at risk of falling victim to the coronavirus, especially given the many ways in which local bars are intertwined. At Trophy Fish in St. Petersburg, Fla., for example, restaurant operations and bar manager Julio Hernández set up a separate ordering counter, placed tables six or more feet apart, forbade people from sitting at the bar or even standing near it, and implemented mask and glove-wearing. Things seemed to be running smoothly and safely.

But then another employee, who works at another bar, contracted COVID-19. The restaurant was forced to shut down temporarily and undergo a deep clean; the rest of the staff, including Hernández, tested negative, but he went into quarantine for 14 days to be safe. The St. Petersburg bar scene as a whole has been decimated, and now Florida bars will once again be unable to serve patrons on site.

“The moment bars opened, people abused it. You would walk down the strip and look at these bars and be like, ‘man, did the pandemic not happen?,’” Hernández says. “Now, these bars are crickets.”

Dr. Krutika Kuppalli, a global health physician and vice chair of the Infectious Diseases Society of America’s global health committee, says there are a number of reasons that make bars prime hotspots for coronavirus spread. They often have suboptimal ventilation and strangers from unknown places streaming in and out, with lowered inhibitions that might impair decision-making. “With everything going on last week and a half, it’s hard to imagine that people are continuing to go out and engage in these types of social gatherings,” she says. “Keeping bars closed would be in the best interest of society.”

At the moment, the majority of bars across the United States are still either completely closed, or open but receiving just a trickle of patrons. Industry insiders say the way coronavirus containment has been handled will have long-lasting impacts for the entire industry. “I’m terrified of seeing my business—and indeed, my entire profession—go down the dump sink in a matter of months,” says Aaron DeFeo, the owner and bar director at Little Rituals in Phoenix, where cases are also spiking locally.

DeFeo says that before coronavirus, a culture in which bartenders themselves opened up craft establishments with their own unique visions was beginning to gain momentum across the country. Following coronavirus, these small businesses, which operate on thin margins, didn’t receive income for months; they may have taken out a PPP loan that placed them further in debt, or undertaken costly reopenings and reclosings. They face further rocky waters at the end of July when enhanced federal unemployment benefits end, stripping away even more of the disposable income that patrons might have had to spend at the bar.

DeFeo says many new and old owners will choose to cut their losses and exit the industry, leaving prospective bartenders with significantly less job opportunities—and consumers with fewer watering holes to pull up a stool. “I think you’ll see large swaths of completely abandoned real estate,” he says. “And we might be facing a landscape that is entirely Applebee’s, Chili’s, TGIF-type places.” 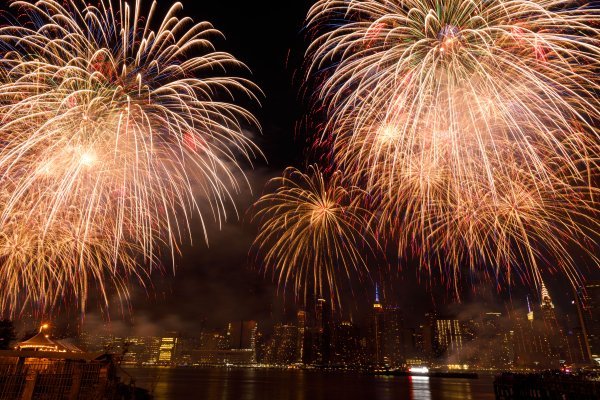 Fireworks Usage Is Exploding. But July 4th Silence Awaits
Next Up: Editor's Pick