An employee cleans the grounds behind the closed gates of Disneyland Park on the first day of the closure of Disneyland and Disney California Adventure theme parks as fear of the spread of coronavirus continue, in Anaheim, California, on March 14, 2020.
David McNew–AFP/Getty Images
By Christopher Palmeri / Bloomberg

Walt Disney Co. indefinitely delayed the reopening of its theme parks in Anaheim, California, because it didn’t think it could get approvals from the state and reach agreements with its unions in time.

The company still plans to open its Downtown Disney shopping district on July 9, but it is no longer moving ahead with the planned July 17 reopening of its Disneyland and California Adventure parks. A new date wasn’t given.

“Given the time required for us to bring thousands of cast members back to work and restart our business, we have no choice but to delay the reopening of our theme parks and resort hotels until we receive approval from government officials,” the company said in a statement.

The Downtown Disney district reopening remains on track under state guidelines for restaurant and retail openings, the company said. And the Master Services Union, which represents the district’s retail workers, previously signed an agreement to return to work.

Opening the theme parks themselves has proven more contentious. A union representing hotel and restaurant workers at Disneyland had planned to protest the reopening, saying it isn’t yet satisfied that it’s safe to return to the resort.

Austin Lynch, a negotiator at Unite Here Local 11, said Disney hasn’t responded to all of their questions regarding the coronavirus. A coalition representing 17,000 Disneyland workers sent California Governor Gavin Newsom a letter last week expressing concerns about safety protocols for the reopening. Unite Here is planning a car-based protest outside the resort Saturday morning.

“Unfortunately, despite intensive talks with the company, we are not yet convinced that it is safe to reopen the parks on Disney’s rapid timetable,” the coalition said in its letter to the governor.

Disney, which has already reopened its resorts in Shanghai and Hong Kong, put in place a number of safety measures. In a blog post, Chief Medical Officer Pamela Hymel said she’s been working with a team of experts on enhanced cleaning, social distancing and other precautions.

The company said it had reached agreements with unions representing a large part of its workforce.

Covid-19 case numbers have been rising in a number of states that have started to reopen their businesses. California reported a record 7,149 new infections Wednesday, with Disneyland’s home of Orange County showing the fourth-biggest increase in the state, at 360 cases.

In Orange County, Florida, locale of the Walt Disney World Resort, the number of cases has tripled over the past three weeks.

Disney plans to start opening its Florida theme parks on July 11. Other theme-park operators, including Comcast Corp.’s Universal Studios and SeaWorld Entertainment Inc., have already opened their Florida resorts. A spokesman for Florida’s Department of Health said Friday there was no data to support a connection between local increases of Covid-19 cases and the reopened theme parks.

Lynch, the union negotiator, said employee concerns include the spaces in which they will take their breaks. He asked whether those rooms will be cleaned and if social distancing will be enforced. Disney hasn’t said whether it would use electrostatic sanitizing sprayers to limit the spread of the virus.

The company isn’t paying for virus testing for employees, Lynch said, and some don’t have health-care coverage.

“What happens when one person in a department gets coronavirus?” Lynch said in an interview. “Do they shut everything down? Until they they answer, they should not be allowed to reopen.”

In Orlando, members of the Orange County Reopening Task Force, a coalition of local business and municipal leaders, focused their meeting on Wednesday on the downtown bars and nightclubs that have been a major source of new outbreaks.

Local real estate developer Chuck Whittall summed up the issue as: “You have loud music. You have to talk loudly and spit on each other. That’s the root of the problem, the younger people. I hate to see that kind of behavior cost the entire community.”

“The timing couldn’t be better,” Aguel said about the athletes’ choosing to play in Orlando.

The NBA will come for training beginning July 7 for a season that could last until mid-October, Orlando Magic CEO Alex Martins said.

Only 35 people per team will travel to Orlando. Players will be tested daily and won’t be allowed to interact with the general public while staying at three Disney hotels.

Martins also said the league would convey a social message to the public when it returns, in light of the Black Lives Matter protests. “We intend to use this platform to bring meaningful police and criminal-justice reform,” he said. 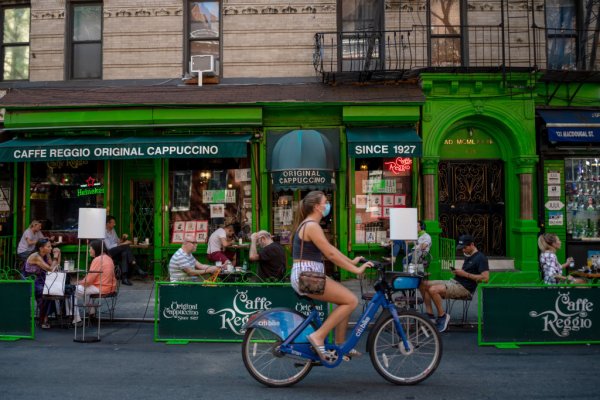 More Young People Are Testing Positive for COVID-19 in the U.S. Here's What That Could Mean for the Outbreak
Next Up: Editor's Pick