The Pentagon put Huawei Technologies and Hangzhou Hikvision Digital Technology on a list of 20 companies it says are owned or controlled by China’s military, opening them up to potential additional U.S. sanctions.

In letters to lawmakers dated June 24, the Pentagon said it was providing a list of “Communist Chinese military companies operating in the United States.” The list was first requested in the fiscal 1999 defense policy law.

This list includes “entities owned by, controlled by, or affiliated with China’s government, military, or defense industry,” Pentagon spokesman Jonathan Hoffman said in a statement.

“As the People’s Republic of China attempts to blur the lines between civil and military sectors, ‘knowing your supplier’ is critical,” Hoffman said. “We envision this list will be a useful tool for the U.S. government, companies, investors, academic institutions, and like-minded partners to conduct due diligence with regard to partnerships with these entities, particularly as the list grows.”

The move’s implications were not immediately clear. But it came as relations between the two superpowers continue to deteriorate, and as China has become an issue in the U.S. election campaign. China has for the past year threatened to produce its own “unreliable entities” list, but has so far not done so.

The list of companies said to be affiliated with the Peoples Liberation Army was mandated under the Defense Authorization Act of 1999, but no administration ever put out the required report. Trump has the authority under the International Emergency Economics Powers Act of 1977 to level financial sanctions against those companies.

Hikvision called the U.S. move “baseless,” saying its ownership details have always been publicly available as a listed company and “independently operated enterprise.” It said it would continue to work with the U.S. government “to answer questions and correct misunderstandings about the company.”

“Hikvision strongly opposes the decision by the U.S. government to misapply a never-used provision of a 21-year-old law,” a company spokesperson said. “Not only is Hikvision not a ‘Chinese military company,’ Hikvision has never participated in any R&D work for military applications.”

“The list put out today by the Pentagon is a start but woefully inadequate to warn the American people about the state-owned and -directed companies that support the Chinese government and Communist Party’s activities threatening U.S. economic and national security,” Republican Senator Marco Rubio said in a statement.

“The list only touches the surface of the Chinese government’s exploitation of U.S. capital markets at the expense of retail investors and pensioners by omitting the networks of affiliated and subsidiary companies.”

China hawks in Congress have long pushed him to direct his Treasury secretary, Steven Mnuchin, to deploy such sanctions against Huawei. It’s unclear, however, whether the president would be willing to take such aggressive action against some of China’s most prized business champions in an election year, as the Beijing government would likely retaliate against American companies as they and the broader U.S. economy have been shaken by the coronavirus pandemic.

Derek Scissors, a China expert at the conservative American Enterprise Institute, said it was “long overdue for the government to indicate which Chinese firms have tight links to the PLA. But if there’s no meaningful action coming with that, it would just be posturing, possibly in reaction to the Bolton book.”

In his memoir, which on sale Tuesday, former National Security Advisor John Bolton asserted that Trump asked Xi Jinping, China’s leader, to bolster purchases of American agricultural products to help him win re-election in November. Trump has rejected that claim.

–With assistance from Feifei Shen and Gao Yuan. 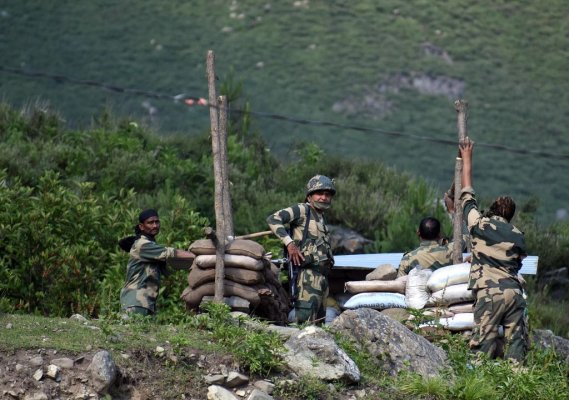 China and India Try to Cool Anger After Border Clash
Next Up: Editor's Pick