What Poland's Elections Could Mean for the Future of Europe

Poland’s voters will head to the polls on June 28 to vote for their next president, a largely ceremonial position but with crucial power to veto laws. If no candidate draws more than 50% of the vote, a second round will take place on July 12. Conservative incumbent Andrzej Duda, who is allied with the ruling Law and Justice Party (PiS) had been the clear favorite — but in the past month, liberal Warsaw mayor Rafał Trzaskowski of the center-right opposition party Civic Platform, which governed from 2007 to 2015, has shot up in polls.

Poland’s elections are coming down to a choice between the ruling party’s increasing tilt toward autocracy or one that pursues democracy, says Piotr Buras, head of the Warsaw office of the European Council on Foreign Relations. It’s a battle that is playing out across Europe, with the rise of right-wing populist leaders in recent years. “Poland’s future will soon force Europe to confront defining questions about itself,” he says.

How had COVID-19 affected the election?

The election was originally scheduled for May 10 but with four days to go and amid much political wrangling it was postponed due to the COVID-19 epidemic. The Law and Justice Party had insisted that the election go ahead on schedule, and Duda was on a clear path to victory. But the opposition argued that it was impossible to conduct a normal election on public health and logistical grounds. “PiS felt that if they waited longer the chances of Duda winning would get slimmer and slimmer,” says Buras.

In early May, Poland recorded some 300-400 infections a day, reaching a total of some 3,000 cases and 1,400 deaths, according to Johns Hopkins University. Poland has relaxed the lockdown rules since May, allowing people to vote in person. (Postal votes are also available on request).

Who’s leading in the polls?

When the campaign started in February, Trzaskowski, the son of a jazz musician, wasn’t even on the ballot. The election delay allowed his party to replace its struggling candidate Malgorzata Kidawa-Blonska, whose support had dropped in the single digits following a lacklustre campaign. The pro-European Warsaw mayor launched his campaign on May 15, pledging “to fight for a strong state, to fight for democracy.”

April polls predicted Duda would comfortably win a first-round win with more than 50% of the vote. But a June survey by data company Kantar found his support had dropped to 38%, while Trzaskowski scored 27%, up 9% from May. If the two end up facing each other in a runoff Duda is expected lose to the Warsaw mayor, the poll said.

“It was a very lucky situation for the opposition that they had this opportunity to change candidates. And now the race will be extremely tight – 200-300,000 votes might be decisive,” Buras said.

Why did President Andrzej Duda meet with Donald Trump ahead of the election?

The shift has prompted Duda to do what he can to bolster his re-election prospects, for example, by showing off his close ties with Washington. On June 24, he visited President Donald Trump—first foreign leader to meet the U.S. president since February—for discussions focused on security cooperation.

The two leaders have met one on one at least five times, including three times at the White House. Trump once praised Duda as an “exemplary ally” and Duda even offered in 2018 to create a “Fort Trump” that would house U.S. troops in Poland. (That plan has not come into action.)

In a press conference on June 24 Duda promised “build a stronger alliance” with the U.S. while Trump said he believes Duda will be “successful” in the elections. “The people of Poland think the world of him. I don’t think he needs my help,” the president said.

Duda’s visit aligned with “Law and Justice’s campaign strategy to counter the opposition’s narrative that Poland has become isolated internationally under the ruling party. They want to show that Poland is a player on the world stage and close to the U.S., which is seen as the the country’s key military and security guarantor,” says Aleks Szczerbiak, Professor of Politics and Contemporary European Studies at the University of Sussex. But Buras believes the visit will not get Duda many more votes. “This is just confirmation that their candidate is a good friend of America,” he says.

How have LGBTQ rights factored into the election?

As Duda’s campaign struggles, he has ramped up hard-line rhetoric, branding LGBTQ rights an “ideology” worse than communism. In the staunchly Catholic country, a majority of people (66%) oppose same-sex marriage, according to a poll by a research center CBOS in July 2019.

Duda introduced a “Family Charter” among his election proposals earlier this month, including a vow to not allow gay couples to marry or adopt children and to ban teaching about LGBTQ issues in schools. It also seeks to “ban the propagation of LGBT ideology” in schools and public institutions, reminiscent of Russia’s controversial 2013 “gay propaganda” law.

When Trzaskowski became a candidate “the issue of LGBTQ rights became a priority in the campaign,” says Szczerbiak. “It was about mobilizing supporters in small towns and rural areas by raising the stakes for these voters, as well as presenting Trzaskowski as a radical,” he says. “Duda’s message is: unless you vote for me, you’ll have a cultural armageddon,” says Buras.

Trzaskowski — a prominent supporter of LGBTQ rights — has accused the president of fuelling hate. In February 2019, hee signed a declaration pledging support for the LGBTQ community outlining a series of measures, including opening anti-discrimination classes in all Warsaw schools and launching a shelter system for those in need of support.

That prompted a backlash from PiS. A senior PiS official in May posted a tweet with a rainbow flag alongside the Warsaw mayor’s name, saying that he would be “monitoring” him. The Chairman of PiS’s executive committee presented the elections as a choice between “the white-and-red Poland represented by the current president and a rainbow Poland,” in an interview with Polskie Radio in May. The media has also joined in. The pro government weekly magazine, Sieci, featured Trzaskowski on its cover wearing a rainbow armband, with the caption “the extremist candidate” in early June.

But it seems to have backfired, says Szczerbiak. Over the past week “PiS have put the issue on the back burner because it wasn’t mobilizing, it wasn’t succeeding in marginalizing Trzaskowski,” he says.

What are the biggest issues at stake?

Since winning a parliamentary majority in 2015, the Law and Justice party has been able to freely implement its conservative agenda, with Duda’s backing. Similar to the power grab made by Viktor Orban’s nationalist Fidesz party in Hungary, PiS have taken control of core liberal institutions such as the independent judiciary and free press, while increasingly defining national identities in terms of ethnicity and religion and demonising opponents. The government has also backed campaigns targeting independent groups working on women’s, LGBTQ, and migrants’ rights.

“What’s at stake in this election is whether PiS can continue with its radical state transformation,” says Szczerbiak. As the party lacks the three-fifths legislative majority required to overturn a presidential veto, Duda’s defeat would seriously hamper the ruling party’s ability to govern effectively.

Duda’s re-election could allow him to use veto powers and push through controversial judicial reforms, including a new law that would allow judges critical of the regime to face punishment. The reform would essentially enable PiS “to get rid of judges who disagree with the government and its illiberal course, ”says Buras. The E.U strongly condemns the move, with its Values and Transparency Commissioner calling it “destruction” not reform in February, and even brought legal action against Duda’s government for violations of its in October 2019. PiS, however, maintains it is trying to make the judicial system more efficient and eradicate communist-era mentalities.

Citing the E.U.’s proceedings against Poland, Trazkowski has said that his country “ceased to be a leader” in Europe. His campaign pledges to “mobilize the government to give up the conflict with the E.U, institutions and most Member States around the rule of law and ideological disputes.”

If Duda wins, the ruling party “will get further entrenched in the state structures and apparatus,” says Buras. The Polish elections are the site of two battles; against PiS’s authoritarian ambitions and to save “the future of the European project, where democracy itself at risk,” he says. And what prevails, Buras says, is a “matter for Europe as a whole.” 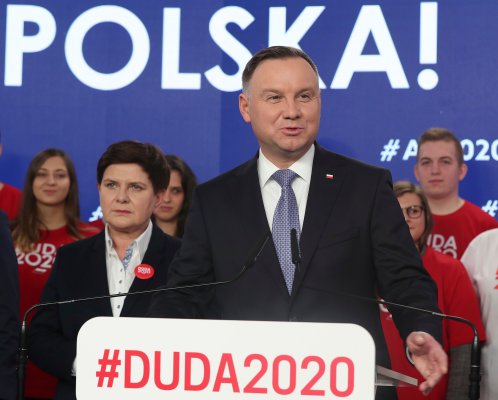