Madison Cawthorn handily defeated Lynda Bennett to complete an upset for the GOP nomination in the 11th Congressional District. Bennett had received the president’s backing on Twitter and the earlier endorsement of Trump Chief of Staff Mark Meadows, who until recently had held the seat.

Cawthorn, who also supports Trump, won by a roughly 2-to-1 margin while handing a setback for the president, who had recorded a phone message for Bennett’s campaign. Meadows is a former House Freedom Caucus leader who represented the 11th District for more than seven years.

Cawthorn won despite other notable Bennett endorsements — Sen. Ted Cruz among them — and outside support from the political arms of the Freedom Caucus.

On Tuesday night, Cawthorn said he won because of a superior ground game with voters and a message about freedom “that translated across generations and across ethnic groups.”

“My opponent seemed like she was really focused on national politics, but I wanted to be a representative for the people of North Carolina,” he told The Associated Press in a phone interview. Cawthorn’s campaign also got help from a super PAC that backs candidates allied with Sen. Rand Paul.

Cawthorn, who would reach the constitutionally-mandated age of 25 to serve in the House in August, was paralyzed from the abdomen down after a 2014 car accident. He’ll face Democrat Moe Davis, a former military prosecutor, and other party nominees in November. The district is still considered Republican-leaning despite recent boundary changes following litigation.

Chris Cooper, a political science professor at Western Carolina University, said Cawthorn had a compelling story and benefited from local Republicans unhappy with details around how Bennett entered the race.

Meadows announced the day before the December filing deadline that he wouldn’t seek reelection. The surprise departure came so late that candidates who had already committed to run for other elected offices were barred from switching.

Some disgruntled GOP activists felt that Meadows concealed his decision from them, while Bennett, a friend of Meadows’ wife, announced her candidacy within a few hours of his announcement.

“The Trump endorsement obviously didn’t play well, and I don’t think that Trump is unpopular in the district,” Cooper said. Rather, he said, the endorsement looked like it was done as a favor to Meadows.

A House Freedom Caucus spokeswoman didn’t immediately respond to a request for comment. Neither did Bennett’s campaign.

Cawthorn called for the runoff after he finished second to Bennett in a 12-candidate primary in early March. Bennett had failed to get more than 30% of the vote needed to win outright.

Cooper said the size of Cawthorn’s victory signals the local party isn’t fiercely divided, which should help Cawthorn in his general election race. Davis is a former chief prosecutor for military tribunals at Guantanamo Bay, Cuba, who later became a critic of how cases there were being handled.

Val Demings is in the Mix to Become Joe Biden's Running Mate. Is Her Police Background an Asset or a Liability?

The scheduled May runoff was delayed due to the COVID-19 pandemic.

With voters worried about the pandemic’s spread, mail-in absentee ballots were popular in the 17 mountain counties within the 11th District leading up to the runoff. Poll workers at in-person voting sites wore face masks and provided voters single-use pens and cotton swabs to mark ballots.

Meadows wasn’t named chief of staff until after the March primary and resigned from the House a few weeks later. The 11th District seat is currently vacant. 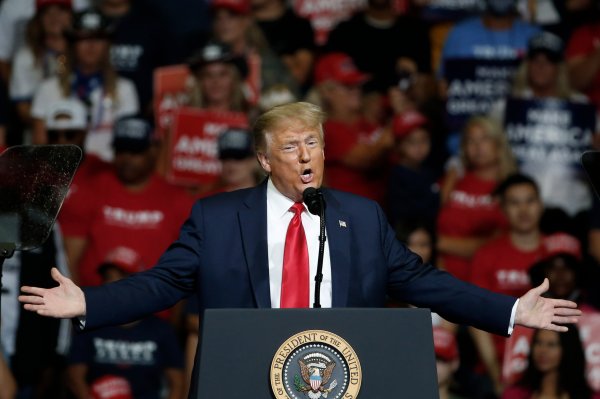