As His Poll Numbers Slump, President Trump Returns to Arizona and the Border Wall

Shortly after President Donald Trump landed in Yuma, Ariz. on Tuesday to see a newly completed section of the border wall, a group of border agents presented him with a miniature model of the barrier.

“They gave me a beautiful replica of the wall, a little shorter version, but that’s okay,” Trump joked during a meeting at the Yuma Border Patrol Station. Later in the day, Trump stamped through the 102 degree air and dust at the base of the real edifice, a tall fence of metal rods cemented into the ground, and signed a plaque marking 200 miles of new construction.

While it’s about a tenth of the length he promised during the 2016 campaign, the wall — and its role as a symbol for Trump’s harsh restrictions on both legal and illegal immigration — remains a central part of Trump’s pitch to voters heading into November at a moment when few things are going Trump’s way. “I think it’s great,” Trump said standing in front of the steel and concrete barrier. “It’s really foolproof.”

Trump’s re-election strategy is proving to be less so. Amid continuing protests against systemic racism, the drag of the COVID-19 pandemic on the economy, and a weak turnout at his comeback rally in Tulsa, Trump’s visit to the border highlights the president’s own desire to spend time talking about immigration and border security, two issues that helped propel him to the White House four years ago.

Even as his Administration has faced managing an unprecedented public health crisis, it has continued to clamp down on immigration this year. After the Supreme Court ruled last week Trump didn’t halt the Deferred Action for Childhood Arrivals program properly, Trump promised to move forward with ending the program in a different way. On Monday, he announced he was freezing several categories of temporary work visas through the end of the year.

But this election cycle, American concerns over immigration have fallen below their worries about the economy, poor leadership, COVID-19 and race relations, according to recent polling by Gallup. “It appeals to his base and it does nothing to expand his coalition,” says Whit Ayers, a Republican pollster and political consultant. He sees Trump turning to the same playbook he used to get elected the first time around. “He’s nothing if not consistent.”

Trump’s approval ratings have slumped in recent weeks, and more states are in play going into November than there were in 2016, including Ohio and Iowa, says Ayers. In addition to the six previous battleground states of Wisconsin, Michigan, Pennsylvania, Florida, North Carolina and Arizona, Ayers says, polls in Georgia and Texas are also closer than they were four years ago.

Trump’s campaign is concerned that Arizona in particular is under pressure from Democrats; Tuesday’s visit was his third trip to the state this year. Arizona’s rate of new COVID-19 infections is by far the worst in the nation, having seen a tremendous surge since late May. On a per capita level, the state is seeing an average of 38 new cases per 100,000 residents every day — nearly twice the second-worst-hit state, South Carolina, with 20 per day.

After his visit to the wall, Trump spoke for 90 minutes to a boisterous audience of mostly students at the Dream City Church in Phoenix, which holds about 3,000 people. Few in the audience wore masks. Trump blamed China for allowing COVID-19 to spread around the globe, using the racist phrase “kung flu” to describe the virus. The crowd applauded loudly at the slur.

Trump also described his visit to the border near Yuma, prompting chants of “Build the Wall,” and went on to say a large Mexican border town is “heavily infected” with the virus. “And, by the way, where that wall is, nobody is getting through. Nobody gets through,” Trump said.

Arizona will test the limits of Trump’s support and its impact on down-ballot races in November. Polls show Biden with a slight lead over Trump in the state. Democrats are banking Biden can win Arizona in November and the party can take a Senate seat from Sen. Martha McSally, a former fighter pilot and Congresswoman who was appointed to fill the seat left vacant when Sen. Jon Kyl resigned in December 2018. McSally is facing former astronaut Mark Kelly, a Democrat, who leads McSally by several points in recent polling.

“Will you please win,” Trump told McSally during the roundtable about border security in Yuma. “We want you to win this race. It’s very important.”

—With reporting by Chris Wilson/Washington 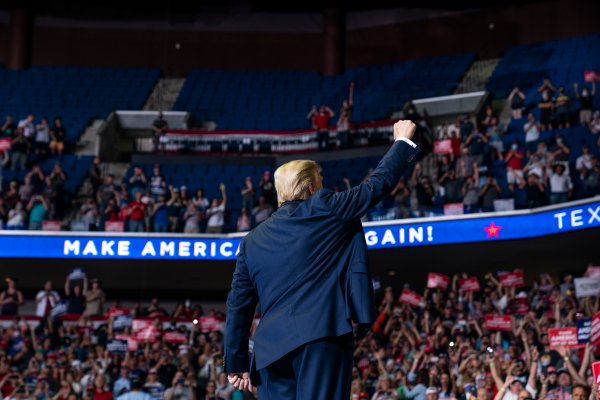 Did Tik-Tok Teens Trick the Trump Campaign?
Next Up: Editor's Pick