Protesters tore down a statue of George Washington in Portland on Thursday night, where demonstrations against racism and police brutality have taken place for 22 consecutive days.

The statue was torn down on the eve of Juneteenth, a historic holiday celebrating the official end of slavery in the United States. A group of approximately twenty people gathered around the statue in the late evening, where some protesters wrapped the statue’s head in an American flag and lit on fire, according to multiple sources.

This is not the first statue to be taken down by demonstrators in Oregon. Protesters toppled a statue of Thomas Jefferson on June 13, and statues of pioneers linked to white supremacy were torn down on June 15 at the University of Oregon.

The protests in Portland have been ongoing since George Floyd was killed by officer Derek Chauvin in Minneapolis on May 25. On Wednesday, protesters peacefully marched in downtown Portland, while on Thursday evening, two groups—Lavender Caucus and Rose City Justice—reportedly held a sit-in at Jefferson High School where people spoke out about their experiences of racism. 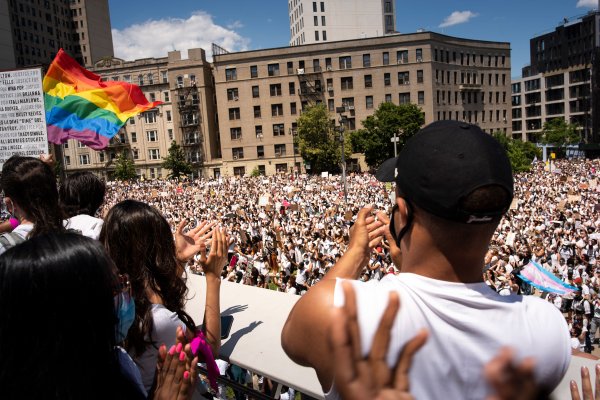 The History Behind the LGBTQ Fight Against Police Violence
Next Up: Editor's Pick