The Racist History of Voter Registration

A voter fills out a registration form in San Francisco on March 3, 2020.
David Paul Morris—Bloomberg via Getty Images
By David Litt

My own life of crime began approximately one year ago, in a Taco Cabana in northwest Houston, where a woman I’ll call Leah led a gang of nervous volunteers through the long list of ways they might inadvertently break the law. Register a voter without first obtaining an official registrar license? Accidentally cross county lines to sign someone up? Copy any information whatsoever—even just a telephone number, even with a voter’s permission—from a registration form? In the Lone Star State, that’s breaking the law.

Let’s start at the beginning. When the U.S. Constitution was ratified, there was no such thing as voter registration. No registered voters cast a ballot for George Washington or John Adams. The concept didn’t exist. Even when voter lists did arrive, at the beginning of the 19th century, they were mostly limited to New England, and adding eligible names to the rolls was the government’s responsibility.

Yet even these unobtrusive attempts at registration proved controversial. That controversy came to a head in 1831 in Boston, when a man named Josiah Capen arrived to vote and discovered he’d mistakenly been left of the list. He sued a local election official and attempted to have Massachusetts’ voter registration system overturned.

Capen lost. More importantly, his case set a precedent that lasts to this day: even when the right to vote is protected, the complicated logistics of voting are up to lawmakers to decide. In practice, this means that long as politicians believe, or can plausibly claim to believe, that they’re protecting the integrity of our elections, they can pass laws making it harder to vote.

It would be more than a century before every state adopted a statewide voter registration system. But almost immediately following Capen’s case, registration became a tool to legally block eligible voters from the polls. In 1836, Pennsylvania lawmakers set up the state’s first registration system, which relied on assessors to collect information door-to-door. The law applied to Philadelphia—and nowhere else. “Although the proclaimed goal of the law was to reduce fraud,” writes Alexander Keyssar in The Right to Vote, “opponents insisted that its real intent was to reduce the participation of the poor, who were frequently not home when assessors came by.”

In the decades before to the Civil War, rural Whig politicians came up with other ways to reduce urban turnout. New residency requirements targeted city dwellers, who moved around more than those in the countryside. In Louisiana, for example, you were removed from the voting rolls if you left your home parish for longer than 90 days. In other states, lawmakers devised literacy tests to weed out the poor and less-educated, or English-language tests to block recent immigrants. The impact of the new laws was obvious, but because they were at least theoretically fraud-fighting measures, they were upheld in court.

These first registration systems were not just among the earliest forms of voter suppression—they became a blueprint for Jim Crow. After the Civil War, literacy tests and residency requirements were repurposed to target Black voters. To these, southern lawmakers added repressive new tools of their own. The most pernicious was created in the 1890s, when a populist revolution brought together Black and lower-income white voters throughout the South, and the ruling Democrats responded by creating what became known as “the poll tax,” essentially a fee for voting.

Which brings us back to the Lone Star State. In Texas, where the economic system kept nonwhite incomes well below average, even the relatively small poll tax shut many minority voters, not to mention lower-income whites, out of the system. Best of all, where segregationists were concerned, the tax could be enforced selectively. Tax assessors had total control over the voter rolls because they could verify, or deny, that you had paid your tax.

If Jim Crow politicians had gotten their way, the poll tax would still be in place. By the middle of the 20th century, however, the Civil Rights Movement was gradually gaining momentum, and segregationists’ most effective turnout-shrinking tool was under attack. As a result, in 1949 Texas lawmakers passed a kind of insurance policy. If, for any reason, the poll tax disappeared, a new system would automatically spring up to replace it: statewide voter registration.

That’s the real story of how statewide voter registration came to Texas. In 1964, the poll tax was abolished by Constitutional amendment, and Texas’s Plan B kicked in. The first few incarnations of voter registration—including a provision that required voters to re-register each year—were deemed so outrageous that Courts overturned them. But over time, Texas refined its system for signing up voters, creating perhaps the most arduous-yet-still-legal one in the nation.

If you want to know why the volunteers I shadowed had to go to such great lengths to enfranchise their fellow citizens, just remember this. In Texas, voter registration was explicitly designed as a backup plan for segregation. The ghost of Jim Crow still haunts the voter registrars of the Lone Star State.

But it doesn’t have to. A single state or federal law could make voter registration automatic, removing a small part of the racism embedded in America’s political process. For Leah and the rest of her heist-planning gang, a good day might be 20 or 30 new registrations. But a really good day—the best day—will be the day they hang up their clipboards for good.

Adapted with permission from Democracy in One Book or Less: How It Works, Why It Doesn’t, and Why Fixing It Is Easier Than You Think, by David Litt, available now from Ecco Press. 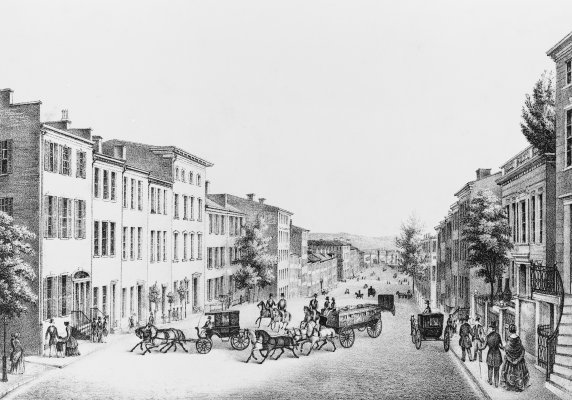 How a Black New Yorker Fought Police Violence in the 1830s
Next Up: Editor's Pick