The Righteous Revulsion Driving the Demands for Racial Change in America

Clemson University football players lead a "March for Change" protest past Tillman Hall on June 13 in Clemson, South Carolina. The Clemson University Board of Trustees voted to strip "Calhoun" from their Honors College name and rename Tillman Hall.
Maddie Meyer—Getty Images
Ideas
By Reuben E. Brigety II
Brigety is vice-chancellor and president of the University of the South. He has served in both the academic and policy arenas and is a former U.S. ambassador to the African Union. Brigety is a graduate of the U.S. Naval Academy and holds a master’s degree and a Ph.D. from the University of Cambridge.

On June 17 I became the 17th Vice-Chancellor and President of The University of the South, colloquially known as “Sewanee” after its location on the Cumberland Plateau in southeastern Tennessee. I am the first African-American to lead this storied institution, founded by Episcopalian Confederates on the eve of the Civil War. Additionally, I am also one of the few African-Americans to lead a predominately white institution of higher education in the United States.

Like my fellow university presidents across the country, I have been consumed with the unprecedented task of preparing to resume residential college life this fall in the midst of a pandemic. Yet the events following the killing of George Floyd on May 25th make clear that academic leaders must also prepare for another monumental challenge – the continued fight for racial justice in America.

The heinous events on the streets of Minneapolis touched off a firestorm of protests around the world. Appalled by the banal brutality with which former police officer Derek Chauvin squeezed the life out of George Floyd during an agonizing eight minutes and forty-six seconds, ordinary people from London to Los Angeles and from Wellington to Washington marched in the streets to demand better from America.

We must not assume that this latest social outrage will simply dissipate like a cloud of tear gas in the wind. Indeed, the naïve hope that politely turning away from the unpalatable realities of persistent racism will make them eventually disappear has arguably contributed to the current crisis. America has made great progress on racial matters, many well-meaning people say. We should embrace the gains rather than dwell on the unpleasantness.

But the young people who are protesting in the streets this summer, and who will be sitting in our classrooms in the fall, do not want progress. They want change. Inherent in the concept of progress is the notion that some degree of imperfection is understandable and inevitable on the path to achieving a worthy ideal. However, when the object of progress is the recognition and respect of one’s humanity by their own government and fellow citizens, the compelling questions to answer are how much imperfection is tolerable and for whom is it acceptable.

My parents and their peers belong to the same generation as the grandparents of today’s young protestors. For them, progress in race relations was a goal to be sought and celebrated. Raised in the Jim Crow South in a system that at best treated them as second-class citizens, they broke their own barriers and marveled at the accomplishments that their children realized in the age of integration. For example, my father entered the medical school at the University of Florida and became one of the first two African-Americans to graduate from there in 1970. My family’s elders rejoiced when I earned degrees from the U.S. Naval Academy and the University of Cambridge, achievements that in their youth were as remote as walking on the moon. Their peers in the Civil Rights Generation hailed the appointments of the first black Secretaries of State and the election of the first African-American President, feats that once seemed so fanciful that Sidney Poitier’s erudite and dignified Dr. John Prentice joked about them to Spencer Tracy’s liberal and conflicted Matt Drayton in the 1967 cinema classic “Guess Who’s Coming To Dinner.”

To the extent that such milestones happened against the backdrop of witnessing the continued mistreatment of their friends and relatives by police or seeing the persistent poverty on the black side of town, they sorrowfully acknowledged that this was still the unfortunate reality of being black in America. As they swallowed these bitter pills, many would tell themselves and their children that at least things were not as bad as they used to be. Progress was being made.

Yet today’s young black people lack the historical perspective and lived experience to contextualize and rationalize the continued racial inequalities in America – a fact for which we should all be grateful. Unlike their grandparents, they never experienced the full weight of their government stubbornly enforcing state-sanctioned apartheid. Unlike their parents, they were born fully free and equal under the law to all of their peers, regardless of the color of their skin. Despite this, they know that but for God’s grace they could have just as easily been hunted down by neighborhood vigilantes like Ahmaud Arbery, or shot to death in their own bedroom by mistaken police like Breonna Taylor, or nonchalantly asphyxiated by an officer of the law while pleading for their dead mother like George Floyd. And the powers that be would have looked the other way for a time, if not forever.

Unencumbered by the psychological constraints of their grandparents and freed from the cautionary instincts of their parents, their protests demand of America, “Would you accept being treated like this? If you would not, then why should we? How is this progress?”

These are the questions that they and other students of color will bring with them to campus this fall, demanding answers and action now – that is, demanding change. They will be joined by many of their white peers who, like them, are two generations removed from Brown v. Board of Education. Similarly intolerant of exhortations for patience in fulfilling the promise of Dr. King’s Dream, these allies have absorbed the principle of racial equality since kindergarten. Collectively, their indignation springs not simply from the perennial impatience of youth. Rather, it is animated by a righteous revulsion at the stubborn, inter-generational gap between the American ideal of equal treatment under the law and the lived reality of too many people of color. This tsunami of pain and grief, of anger and outrage requires our attention as academic leaders just as much as the imperative of responding to the worst public health crisis our nation has experienced in a century.

Fortunately, there are many resources that we can draw upon to help our university communities grapple with these challenging and urgent questions of race and equality. For certain, the most important of these is our own collective will to face these hard questions and to follow the conversations wherever they may lead. For example, Sewanee has courageously addressed its own troubled legacy for some years now through the Roberson Project on Slavery, Race and Reconciliation. Named for Sewanee’s first tenured African-American professor, the Project chronicles and critiques the University’s relationship with slavery, Jim Crow, and the perpetuation of the so-called “Lost Cause” of the Confederacy. Rooted in the social justice and faith traditions of the Episcopal Church, it seeks healing and reconciliation through an honest assessment of our past. There is scarcely an institution of higher education in the country that, by virtue of its historical roots or contemporary circumstances, cannot benefit from such an examination.

Second, there has been an explosion in recent years of very good scholarship on the nature of race and inequality in America. Robin DiAngelo’s White Fragility and Ibram X. Kendi’s How to be an Anti-Racist top the best-seller lists. The Smithsonian Institution’s National Museum of African-American History and Culture has developed the web portal Talking about Race. There have never been more intellectual tools at our collective disposal to help us navigate these difficult questions. We should not hesitate to use them to foster constructive dialogue.

Finally, as institutions of higher education we must move beyond the cloistered confines of our campuses to engage the racial and economic disparities that exist in our host communities. Doing so provides a useful pathway to channel the outrage of our students from passionate protest to productive action. Such direction is all the more important as we necessarily demand that every member of our community refrain from violence in expressing their views. At Sewanee, our Office of Civic Engagement encourages all of our students – both those who have been deeply moved by questions of social justice and those who have scarcely given them any thought at all – to participate in meaningful community service on the Mountain that we call home. Similar outreach efforts can serve other university communities as well.

Sewanee’s University Motto is derived from Psalm 133 – Ecce Quam Bonum, “Behold how good and pleasing it is for kindred to dwell together in unity.” It is not merely a passive observation, but a call to action. All of us as academic leaders can help to bind the gaping wounds of racial injustice that have, once again, been laid bare for all the world to see. Now is the time for us to take up the challenge.

Most Popular on TIME
1
Kelly Preston Dies at 57, Husband John Travolta Says
2
Rapper Lil Marlo Killed in Possible Targeted Shooting
3
With No End in Sight to the Coronavirus, Some Teachers Are Retiring Rather Than Going Back to School 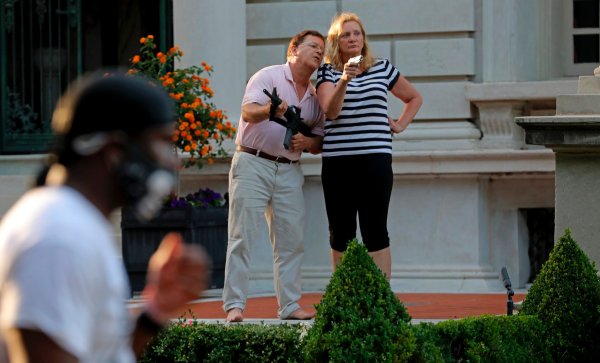