The FBI, the U.S. Attorney’s office for the Central District of California and the Department of Justice Civil Rights Division are “actively reviewing” the recent hanging deaths of two Black men in Southern California to “determine whether there are violations of federal law,” the FBI announced this week.

The deaths come amid mass protests against systemic racism and police brutality that have swept the U.S. following the death of George Floyd on May 25.

Police initially said there was no evidence of foul play in either man’s death, and on June 12 Los Angeles County Sheriff’s Department said Fuller’s death was likely a suicide, due to the lack of evidence otherwise. But both Fuller and Harsch’s families have said the men were not suicidal.

Many advocates have expressed concern about a potential pattern in these and other recent deaths. Another Black man was found hanged in a park on June 9 in New York City; his death was ruled a suicide by the city’s medical examiner. A Latino man and a Black teenager were also found hanged in public locations just a day apart in Houston; their causes of death are pending, but police say their families have both said they were suicidal.

For now, both Harsch and Fuller’s causes of death are still pending. Here’s what to know.

Paramedics in Palmdale, Calif., were alerted to a possible emergency in the city’s Poncitlán Square at approximately 3:30 a.m. PT on June 10, Los Angeles County Fire Department Fire Chief Daryl Osby said at a press conference on Monday. Upon their arrival, they found the body of a man hanging from a tree, Osby continued. The man was later identified as 24-year-old Robert Fuller.

On June 12, the Los Angeles County Sheriff’s Department said Fuller likely died of suicide. However, his family and friends have publicly pushed back against that claim.

“Everything that they’ve been telling us has not been right,” Fuller’s sister Diamond Alexander said during a protest in Palmdale on Saturday that reportedly grew to include thousands of people. “My brother was not suicidal,” she added.

On Monday, officials with the LA County Sheriff’s Office announced that Fuller’s official cause of death was deferred pending further investigation.

Dr. Jonathan Lucas, the Medical Examiner-Coroner for LA County, said at a press conference that while initial reports “appeared to be consistent with a suicide” due “to the lack of evidence of any foul play at the time,” his office “felt it prudent to roll that back and continue to look deeper.” He said a complete autopsy was performed on June 12 and the results of the toxicology report are pending.

Kent Wegener, the captain of the LA County Sheriff’s Homicide Bureau, also said on Monday that officials will conduct a forensics examination of the rope involved in the hanging and a “cellular analysis” of Fuller’s phone, among other next steps. California Attorney General Xavier Becerra will monitor and review LA County’s investigation, LA County Sheriff Alex Villanueva said on Monday.

The FBI and the Department of Justice Civil Rights Division will also “actively review” the investigation, a FBI spokesperson told TIME.

There have been recent allegations of racial discrimination in Antelope Valley, where Fuller died, fueling distrust between the community and police. In 2015, Los Angeles County reached a settlement with the U.S. Department of Justice following allegations that the police had systematically targeted racial minorities, specifically in the cities of Lancaster and Palmdale.

While the Fuller family’s attorney, Jamon R. Hicks, did not immediately respond to TIME’s request for comment, he told the Los Angeles Times on June 17 that he was alarmed the police did not initially investigate Fuller’s death as a homicide given the protests across the country and “the fact that this is a city that has had a history of racial tension and conflict.”

Less than two weeks before Fuller’s death, on May 31 at approximately 7 a.m. PT, police received a 911 call from a woman saying her boyfriend — later identified as 38-year-old Malcolm Harsch — had hanged himself at a homeless encampment in Victorville, Calif., per the San Bernardino County Sheriff’s Department.

The San Bernardino County Sheriff’s Department said in a news release Monday that a “thorough investigation was conducted at the scene to recover any evidence to assist with the investigation,” and said officials found no evidence to suggest foul play.

“Detectives from the Victorville Police Department are continuing to investigate the death of Mr. Harsch,” the release continued.

Harsch’s autopsy was conducted on June 12 and the results are pending, according to police. Officials have not yet released a cause or manner of death, but Harsch’s family has said they find it hard to believe that Harsch would die by suicide.

“We are really just trying to get more answers as to what happened,” Harsch’s sister told The New York Times on Sunday. “My brother was so loving, not only to his family but even strangers. It is not like him.”

“The explanation of suicide does not seem plausible,” family members told Victor Valley News on June 13. “There are many ways to die, but considering the current racial tension, a black man hanging himself from a tree definitely doesn’t sit well with us right now. We want justice not comfortable excuses.”

The San Bernardino County Sheriff’s Department told TIME that they intend to “share investigative details” of their investigation into Harsch’s death with the California Department of Justice and the FBI so they can “compare to the Palmdale incident.” 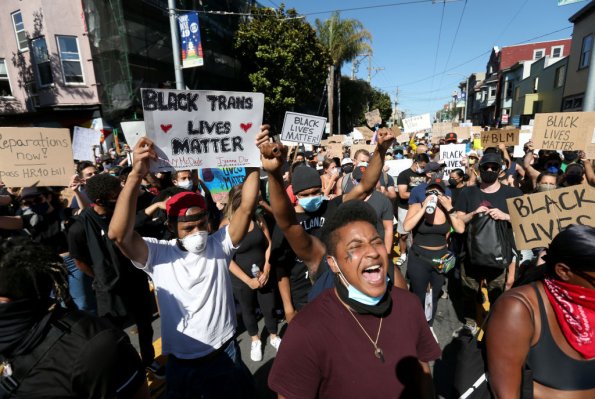 White Couple Confronts Man for Writing 'BLM' at His House
Next Up: Editor's Pick