‘We’ll Do All We Can to Promote Free Speech,’ Says Zoom CEO Eric Yuan After Criticism on Encryption and Privacy

Zoom CEO Eric Yuan said he wants everyone to feel safe and protected when using the videoconferencing service that has risen in popularity much of the workforce works from home during the pandemic. “We want to make sure every user is happy,” said Yuan on Thursday’s Time100 Talks.

The sentiment comes after much discussion about the company’s controversial stance around both encryption and its compliance with local government’s censorship laws, a hot-button issue that’s only garnered more attention amid rising protests around the world and a growing fear of government surveillance of protesters and activists, a fear confirmed by Zoom’s own actions taken against some users.

Mr. Yuan announced in a blog post the company’s plans to include end-to-end encryption support for both free and paid accounts, backpedaling from the company’s announcement two weeks ago explaining why calls made by free users would not support end-to-end encryption. “Our initial thought was to only give [end-to-end encryption] to paid users because we cannot identify who those free users are,” said Yuan, despite his earlier statements suggesting the reason was primarily to comply with the FBI and local law enforcement. “But based on feedback we figured out a way to identify those free users, meaning you can use your phone number for SMS verification… We are very committed to listening to our customers’ feedback and making changes to deliver happiness to our users.”

Still, the company’s actions run counter to Yuan’s statements. Recently, Zoom was criticized for suspending the accounts of three human rights activists hosting Zoom calls discussing Beijing’s 1989 Tianamen Square incident, where the Chinese government opened fire on demonstrators. “To be clear, their accounts have been reinstated, and going forward, we will have a new process for handling similar situations,” the company said in a blog post addressing the incident.

“On the one hand, we needed to make sure we’re in compliance with local laws,” said Yuan when asked about the suspension. “On the other hand, you are so right. We are an American company, we truly promote free speech. And now, we’re doing all we can to see if there’s a conflict. We want to make sure that we stick to our values rather than our revenue opportunities.”

In a conversation with TIME’s Haley Edwards, Yuan also discussed the company’s changes when it comes to its internal structure, changes that coincide with the rapid global cultural shift thanks to Black Lives Matter protests in both the U.S. and around the world. Its most major change is the hiring of its first Chief Diversity Officer, Damien Hooper-Campbell. Hooper-Campbell, was previously Chief Diversity Officer for eBay, as well as Global Head of Diversity & Inclusion for Uber.

The community of Zoom users has grown at a breakneck speed, from 10 million meeting participants in December to over 300 million as of April 2020, largely due to the COVID-19 pandemic, forcing non-essential workers to remain at home and conduct more and more of their work online via videoconferencing. While the U.S. has begun inching toward the eventual lifting stay at home orders around the country, it could be quite some time before people are able to resume their normal schedules, including a commute to the office. It also means more video calls are in everyone’s future, a factor that could lead to what many are calling Zoom burnout.

Yuan, aware of the growing concern of videoconferencing fatigue, said the company has partnered with the American Heart Association, and is funding a monthly “Happy Half-Hour Mental Wellness Webinar” series to the tune of half a million dollars.

As for Zoom’s future, Yuan is confident the future of the service will make in-person meetings of today feel antiquated. His more futurist-inspired examples include features like feedback when it comes to physical interactions like handshakes, and even the possibility of scent detection, all within the next 50 years. “I think those features will truly enrich the videoconferencing space,” says Yuan. “We’re not there yet, but the future is bright.” 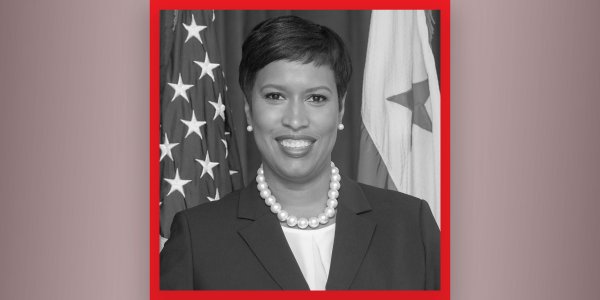 D.C. Mayor Muriel Bowser on the City's BLM Mural
Next Up: Editor's Pick