Beyonce attends the Premiere Of Disney's "The Lion King" at Dolby Theatre on July 09, 2019 in Hollywood, California.
Jon Kopaloff—FilmMagic/Getty Images
By Tara Law

Beyoncé Knowles-Carter called for the prosecution of the Louisville, Ky., police officers involved in the death of Breonna Taylor in a letter to the attorney general of Kentucky.

In the letter posted on her official website on Sunday, the star called upon Attorney General Daniel Cameron to “demonstrate the value of a Black woman’s life” by providing justice for Taylor, a 26-year-old emergency medical technician, who was killed by Louisville Metro Police Department (LMPD) officers who entered her apartment while she slept. On March 13, the officers broke into her apartment while executing a “no-knock” warrant, permitting the officers to enter the home without knocking or announcing their presence. The officers fired more than 20 rounds in the home, striking Taylor eight times, reports say. Taylor’s boyfriend had shot at the officers, thinking that they were intruders.

“Three months have passed — and zero arrests have been made, and no officers have been fired,” Beyoncé’s letter states. “The LMPD’s investigation was turned over to your office, and yet all of the officers involved in the shooting remain employed by the LMPD. Sgt. Jonathan Mattingly and Officers Myles Cosgrove and Brett Hankison must be held accountable for their actions.”

Beyoncé called on Cameron to bring criminal charges against the LMPD officers involved in the shooting in order to bring transparency in the investigation of Taylor’s death and the practices “that result in the repeated deaths of unarmed Black citizens.”

“Don’t let this case fall into the pattern of no action after a terrible tragedy,” Beyoncé wrote. “With every death of a Black person at the hands of the police, there are two real tragedies: the death itself, and the inaction and delays that follow it. This is your chance to end that pattern. Take swift and decisive action in charging the officers. The next months cannot look like the last three.”

Beyoncé wrote that the department’s “investigations have created more questions than answers,” noting that the report on the incident said that Taylor was uninjured in the incident and contradicted accounts of Taylor’s boyfriend and several neighbors in saying the officers identified themselves before entering.

Beyoncé has long been a vocal supporter of the Black Lives Matter movement and of racial justice, including in her artistic work, and has been particularly vocal about Taylor’s case. Earlier this month, she posted links to a petition calling for justice in the case on her website and Instagram. 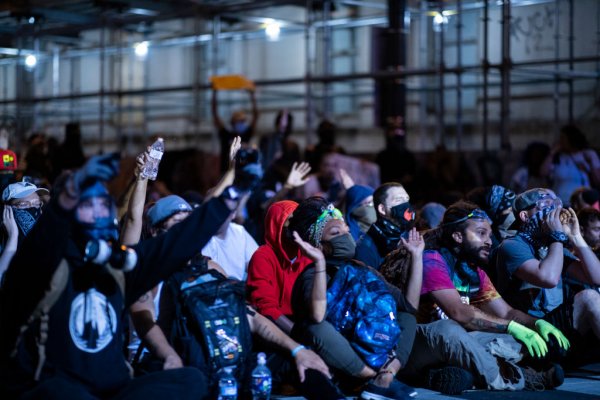 One Man Shot Dead As Police and National Guard Open Fire During Louisville Protests
Next Up: Editor's Pick