This Researcher Predicted 2020 Would Be Mayhem. Here’s What He Says May Come Next

Not everyone took Peter Turchin seriously a decade ago when he said widespread civil unrest would sweep through the U.S. in 2020.

“They had no reason to believe I wasn’t crazy,” says Turchin, a 63-year-old researcher who teaches cultural evolution at the University of Connecticut.

In 2010, after analyzing historical cycles of instability, Turchin made a prediction that was published at the time in the journal Nature: America will suffer a period of major social upheaval beginning around 2020.

Some were skeptical, Turchin says, because “people did not understand that I was making scientific predictions, not prophecies.”

Then 2020 came. Amid a global pandemic—which has so far killed more than 116,000 people in the U.S. and resulted in record unemployment rates—national unrest erupted at the end of May over the death of George Floyd, a 46-year-old Black man who begged for his life as a white Minneapolis police officer kneeled on his neck for nearly nine minutes.

Dozens of cities were placed under curfews as marches protesting police brutality and racism blocked highways, bridges and city streets. Videos circulated of heavy-handed policing: pepper-spraying of peaceful protesters and journalists, and the shoving of marchers to the ground by officers. Some protests ended in violence, with police cars torched and shops looted. The National Guard was deployed in several states.

While he feels validated, Turchin is horrified to be right. “As a scientist, I feel vindicated,” he says. “But on the other hand, I am an American and have to live through these hard times.”

After spending the last 20 years studying crises in America and the structural defects that helped cause them, Turchin says many signs showed the U.S. was spiraling toward upheaval in this decade.

The nation, he says, has experienced stretches of turmoil about every 50 years between 1870, during heightened tensions of the Reconstruction Era, and 1970, in the aftermath of Martin Luther King Jr.’s assassination when women and many minority groups were fighting for equality amid protests against the ongoing Vietnam War.

Turchin looked at data analyzing peaceful and violent anti-government demonstrations that involved at least 100 people between 1780 and 2010. Using a computer model, he also factored in economic patterns—including declining wages, wealth inequality, exploding national debt and other social pressures that affect national stability—from the same time period. The model showed social and economic turmoil in the U.S. would come to a boiling point in the years around 2020, Turchin wrote in his 2010 paper.

Worse conditions could still be coming.

Turchin says societal crises, which are triggered when pent-up pressures seek an outlet, can typically last for five to 15 years. If the underlying roots of unrest are not properly addressed, turbulent events are easily set off again. In South Africa, for example, which is one of the world’s most unequal countries, according to the World Bank, intense protests and anger over race and wealth inequality still rankle the country, 26 years after apartheid ended. Residents burn tires in almost-daily protests, according to the Associated Press.

Since Floyd’s death on May 25, conversations about systemic racism and police brutality against Black men and women have spread across the nation and the globe. Local officials in some cities, including New York and Minneapolis, have announced plans to either defund or dismantle their police departments, while federal lawmakers are pushing to reform police in other ways, including banning chokeholds and creating a national registry of misconduct.

There is growing momentum in finding solutions, Turchin says, but reversing trends has generally been a slow process. President Donald Trump’s administration has denied that systemic racism exists in the U.S. law enforcement system, which could delay change longer.

On top of that, Turchin says the COVID-19 pandemic has further worsened the wellbeing of large swaths of the American population—a leading driver of national instability—and could make the public less likely to trust government institutions. As millions of Americans remain jobless, Turchin says there will be other triggers after this. He worries tensions “may escalate all the way to a civil war.”

“Unfortunately,” he says, “things are not as bad as they can be.” 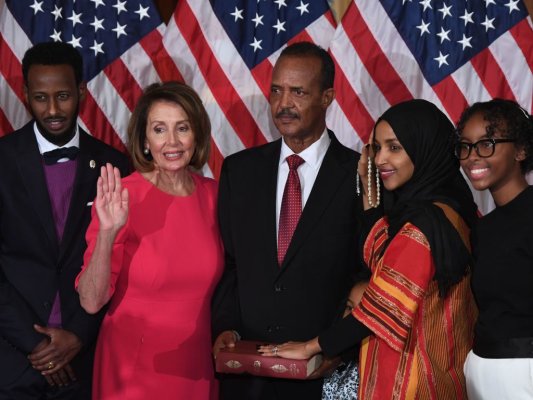 Rep. Ilhan Omar's Father Has Died From Complications Related to COVID-19
Next Up: Editor's Pick