'I Really Want to Be in the Room.' Rosemary Ketchum Elected as West Virginia's First Openly Transgender Official

Rosemary Ketchum became the first openly trans elected official in West Virginia on June 9 when she was elected to city council in Wheeling.
Courtesy of Rosemary Ketchum
By Sanya Mansoor

Rosemary Ketchum became the first openly transgender elected official in West Virginia Tuesday, when voters in Wheeling elected her to their city council.

She hadn’t always planned on running, however. “I never considered running for office — not because I didn’t think I could do the job but I just didn’t think I was allowed,” Ketchum tells TIME. “I thought that was a space for people who didn’t look like me or live like me.”

Ketchum changed her mind after she had frustrating experiences trying to get elected officials on board with policy changes she was advocating for as part of her work as associate director of the NAMI center for persons with mental illness and as a community organizer. It was then she says, “I realized that I really want to be in the room” where those decisions are made.

The LGBTQ Victory Fund, which focuses on improving LGBTQ representation among government officials, and GLAAD, dedicated to advocating for acceptance of the LGBTQ community, both congratulated Ketchum on her victory.

The LGBTQ Victory Fund pointed out that when Ketchum takes office she will be “one of just 27 out trans elected officials in the entire nation.”

Mayor Annise Parker, President & CEO of LGBTQ Victory Fund, said in a statement that “Rosemary has shattered a lavender ceiling in West Virginia,” noting that “trans people are severely underrepresented in elected office.”

“We know Rosemary’s race will inspire other trans people from conservative states to consider a run for office in their communities — and then those candidates will inspire others as well,” Parker said. “That virtuous cycle is the key to building trans acceptance and political power long-term.”

Ketchum, 26, clinched a close victory, winning with 39.3% of the vote—just edging out her closest competitor, Peggy Niebergall who lost with 37.2% of the vote and surpassing two other candidates, according to WTRF-TV.

Ketchum said in a video statement on Twitter that the “attention has been overwhelming in the best way possible.”

Ketchum says Wheeling has serious problems with homelessness and the opioids crisis—both issues that she feels uniquely equipped to address because of her experience running a local mental health facility and personal relationships with friends and family struggling with substance abuse. “Addiction doesn’t go away because of a pandemic,” Ketchum says.

Ketchum and her family also went through homelessness and were living on neighbors’ couches after their house burned down in 2010 when she was 16. “We didn’t have a back-up plan,” she says. That was a transformative moment in her life and it’s what brought her family to Wheeling.

Ketchum graduated from Wheeling Jesuit University in May 2019 with a bachelors degree in psychology. She’s often found herself at demonstrations and says she has protested everything from challenges to the Affordable Care Act to gun violence in the wake of the Parkland, Fla. mass shooting to issues surrounding SNAP and poverty.

Ketchum’s trans identity provides a unique perspective on city government, especially when it comes to building trust with communities, she notes. “Being trans, you can’t help but both be vulnerable every single day but also prevent yourself from living your life with your shield up because it’s so easy to do so,” Ketchum says.

Her message to other openly trans people considering running for any kind of off is just to “do it.” “It’s easier than you think,” Ketchum says. “If you really love and are passionate about community and have the best ideas, running for office will be fun and exhilarating and everything you want it to be.”

Although being trans inevitably informs how she shows up personally and professionally, Ketchum says she “didn’t run on the idea of being the first openly trans official in West Virginia.”

“It rarely ever came up in conversation. We spoke about potholes and stray cats,” she adds. “I can’t help—whether I try or not—being trans does influence the way that I run, the way that I speak to folks, how I will potentially legislate in our city.”

Wheeling includes residents from all parts of the political spectrum. “West Virginia in particular can be very tense sometimes because in one instance we have some of the most progressive people in the country living in Wheeling and then a truck drives by with a rebel flag hoisted in its bed,” Ketchum says.

Ketchum acknowledges that nationwide protests against racism and a global pandemic make what’s happening now a unique moment in history—the effects of which are being felt in Wheeling, too. “This is a catharsis in so many ways and it can’t end at holding a sign,” she says. “It has to revolutionize the way we elect people.”

Times are of course complicated now, Ketchum says. “But I don’t think there’s ever been a time more better positioned for change and growth,” she adds. 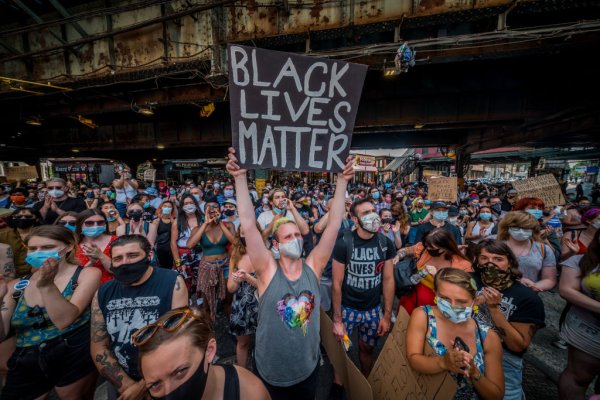 A Long Overdue Awakening to Systemic Racism
Next Up: Editor's Pick