I Thought I Was Doing Pretty Well. Then Came the Pandemic

Illustration by Ellen Weinstein for TIME
By Sam Lansky

At the dawn of the pandemic, as businesses shuttered and frontline workers braved inadequate conditions and the death toll began to tick frighteningly upward, I was home alone, nursing one selfish obsession: that I would use this time to get in really good shape. I am not proud of this–I would much rather write that I was raising money for communities disproportionately affected by this crisis, or delivering meals to the immunocompromised–but it’s the truth. The more I thought about it, the more the idea sharpened in my mind’s eye: this persistent fantasy of how I would emerge anew once the lockdown lifted, athletic and radiant, the best I’d ever been. I envisioned myself on the book tour for my up-coming novel, reading a moving passage to a rapt audience, which would probably include several ex-boyfriends who would lament that they had ever let me get away. Afterward, I would take shirtless pictures by a swimming pool under a cloudless blue sky. It was the shallowest, most inconsequential thing that I could fixate on during such a profoundly upsetting time, and probably for that exact reason, it became my lifeline.

It began innocuously–even virtuously. After all, exercise is recommended as a treatment for depression, which I’ve battled for years. In the morning, I would unroll my yoga mat and take a streaming workout. But soon, one workout didn’t feel like enough, so instead I took two. Then three. I ordered ankle weights, dumbbells and a food scale. Counted calories. Cut carbs. Began intermittent fasting. Bought a Fitbit, which I picked up from Target that same day wearing a mask and gloves; I couldn’t wait the two days it would take to ship. I would wake at 5 a.m. to exercise for three hours before my workday began. I ate no-cheat meals. I took no days off. Between sets, I would scan Twitter or read the news until a wave of nauseous dread bubbled up inside me, and then I would do more sit-ups. When I reached my “goal weight”–a number I’d picked arbitrarily–I reset it for 10 lb. less. As soon as I woke up, I started thinking about how I could get thinner that day. I’d never had this much control over my environment before. With nowhere to go, I went inward–then found myself trapped there.

None of this, strictly speaking, was new. I spent my 19th birthday in inpatient eating-disorder treatment, where I was the only male patient. (Although I felt like a unicorn at the time, studies indicate that 10 million men in the U.S. will suffer from an eating disorder at some point in their life, as will 20 million women.) It was just one attempt at improving the persistent problem of my mental health during the course of my early adulthood, which seemed to shape-shift as it attached to new expressions of dysfunction: depression, anxiety, addiction and compulsive behavior. Ultimately I got sober and became someone who appeared, more or less, to have it together. I published a memoir about my troubled teenage years and wrote cover stories for this magazine. Living in my brain never felt easy–like so many people who have struggled with mental illness, I had the sensation that crisis was always lapping at my feet like a rising tide, though I kept managing to avoid having to swim in it outright.

Illustration by Ellen Weinstein for TIME

But in the past couple of years, I thought I’d made headway toward real healing, so much so that it had become one of the big themes of the novel I’d written. It was the story of a young man, much like me, who meets a mysterious healer who promises to “fix” his emotional issues in three days. As he begins to face the ghosts in his past, he interrogates the problem of thinking of oneself as broken in the first place. I’d thought while promoting the book–looking very trim, of course–I would deliver inspirational speeches about the transformative power of self-acceptance. Now that was the very thing upon which it seemed I had lost my grip, and I felt like a fraud, backsliding into addictive patterns I’d believed I’d conquered.

On a macro level, the pandemic has exposed the fragility of so much that many of us took for granted, from our economy to our health care system. Yet when I look at myself, what I see laid bare by the crisis is how all the systems I used to keep myself feeling whole were more precarious than I’d ever realized: the morning meditation practice that no longer quiets my mind, the therapist who’s now glitchy over Skype or the 12-step meetings that keep getting hacked. I am more fortunate than most: I am still employed; my housing is stable; even the fact that I have hours available to compulsively exercise, as opposed to scrambling to cover bills, as many people must, is a form of privilege. But mental health is not a luxury good, and when I talk to friends about how they are coping in the lockdown era, it seems as if most, if not all of us, are on the verge of cracking.

Like most professional young adults, I subscribe to a culture of self-improvement, the belief that I can always be getting better, stronger or faster. It’s not enough to endure the global pandemic, or so I tell myself. If I were made of really strong stuff, I would find some way to thrive through it. I could make this story as cleanly aspirational as a before-and-after picture, inviting the world to marvel at my accomplishment. Everyone says Shakespeare wrote King Lear during quarantine; I got abs. Who cares how, or what it took to get there? That’s particularly tricky because my self-harm took a socially desirable shape. (It’s particularly valuable among other gay men, a community that’s long privileged a certain type of body.) But being home alone with an eating disorder is a problem, no matter the angle. Those of us who struggle with mental illness have known for a long time that isolation is a symptom of our disease. What happens when isolation is also a public-health mandate?

In a recent poll, nearly 40% of American adults reported that their mental health has been negatively affected by the pandemic. Another sobering report indicated that beyond the 100,000 people who have already died from COVID-19 in the U.S., as many as 75,000 more could die what’s termed “deaths of despair”–from substance abuse or suicide–as a result of the consequences of the pandemic, both social and economic. Those numbers are unthinkable.

Many resources are now available virtually, a crucial shift: in March, call volume to the national help line run by the Substance Abuse and Mental Health Services Administration jumped nearly 900% higher than that same month last year. But anyone who’s spent time in a 12-step program, been in therapy or even just had an honest conversation with a trusted friend can tell you that one of the most vital resources available to us is connection: the simple, radical act of piercing the divide between the frightened, insular self and the people around us who might seek to understand. There’s a difference between a grainy face on a screen and the embrace of a loved one. In order to be truly vulnerable, we need to be felt.

For me, the tools that I relied upon to feel well often looked less like treatment and more like the ingredients that make up a full, joyful life: the friends I saw for long, intimate dinners; the work events that made me feel purposeful and accomplished; even the affirming gym I went to in the mornings, which had as much body diversity as anyone is likely to find in a city like Los Angeles. As a single person living alone, without the anchor of a family, I didn’t think of these things as extravagances–I thought of them as the cornerstones of my life in recovery. It had never occurred to me that they were actually a kind of scaffolding that could be stripped away overnight.

This is the problem that confronts many of the people who are living through this epidemic alone: our only company right now may be our demons. But the shame or self-consciousness we might feel over struggling is the same poison that makes us struggle in the first place: that there must be something wrong with us, that we are alone in what we’re feeling, that anyone we share it with could only experience it as a burden. So it becomes a self-fulfilling prophecy: we feel bad for feeling bad, and feeling bad just makes us feel worse.

It’s a cliché that addicts are self-absorbed, and why wouldn’t we be? Good luck clearing the space to think about anything but yourself over the deranged, screaming choirs of your unmet cravings. It’s why the 12 steps prescribe service as part of treatment–it’s the opposite of every addict’s naturally self-oriented first impulse. But when opportunities for service evaporate because of a tectonic shift in our world, it’s easy for that selfishness to creep back in.

After nine weeks of pushing myself, a dull ache in my right foot grew to a stabbing pain, until in the third hour of my morning workout, it became so agonizing I couldn’t put weight on it anymore. Defeated, I collapsed onto the floor. No longer in motion for the first time in what felt like weeks, I looked around my apartment and felt the heavy, anxious weight of that stillness. By that point, the book tour I’d been preparing for had been canceled. But that was no matter–the obsession had consumed the goal it had once been serving. I had written a book whose protagonist overcomes his insecurities to find peace and freedom, and now I was a hostage to the same monster I’d imagined my avatar besting on the page. With the world at war, here was my body–a battle-field that was just for me.

I wanted to stay in my bubble of self-obsession, which had become a kind of security blanket, much as I hated it, but I knew I couldn’t any longer. Instead, I called a friend I knew had been struggling. I didn’t talk about myself or my problems. I just asked her how she was doing and listened to her answer. And doing that–getting out of myself–made me feel better, at least for a moment.

In the years I’ve been sober, I’ve found the hardest thing about recovery–not just from addiction, but from the trauma of being a person in the world–might be accepting that growth is not always linear. We move forward, and then, sometimes, we fall back. As a writer, I find this discomfiting: I want the clean, narratively resolute satisfaction of a happy ending. But when there is no end in sight, all we can do is try to cope, however imperfectly. “One day at a time” works for pandemics too.

Lansky is the author of the novel Broken People, out June 9 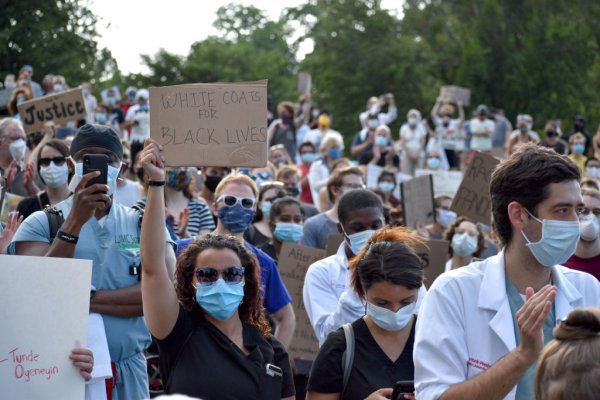 'Protest Is a Profound Public Health Intervention.' Why So Many Doctors Are Supporting Protests in the Middle of the COVID-19 Pandemic
Next Up: Editor's Pick