They say that in national politics, you get only one chance to introduce yourself to the country. For Keisha Lance Bottoms, that moment is kind of a blur. It came on the evening of May 29 as Atlanta, the city she has led since 2018, was convulsed by outrage over the killing of George Floyd 900 miles to the north, in Minneapolis. As demonstrations slid into vandalism in the city, the mayor called a news conference.

It was the former.

“Above everything else, I am a mother,” she began. “I am a mother to four black children in America, one of whom is 18 years old. And when I saw the murder of George Floyd, I hurt like a mother would hurt. And yesterday when I heard there were rumors about violent protests in Atlanta, I did what a mother would do. I called my son, and I said, ‘Where are you?’ I said, ‘I cannot protect you, and black boys shouldn’t be out today.'” The mayor paused. “So, you’re not going to out-concern me and out-care about where we are in America. I wear this each and every day. And I pray over my children each and every day. So what I see happening on the streets of Atlanta is not Atlanta. This is not a protest. This is not in the spirit of Martin Luther King Jr. This is chaos. A protest has purpose.”

Bottoms went on for 3½ minutes more and was followed at the microphone by Atlantans making the same point at varying timbres: MLK Jr.’s daughter the Rev. Bernice King and rappers T.I. (“This is Wakanda. This is sacred. It must be protected.”) and Killer Mike, whose own impassioned speech went viral. Yet in a national uprising famously without leaders, it was the mayor who displayed the vulnerability, strength, exasperation and controlled anger that were driving hundreds of thousands into the streets. Not 10 days later, she was being vetted for the position of vice-presidential candidate on the Democratic ticket, which presumptive presi-dential nominee Joe Biden has said will be filled by a woman and quite possibly a minority.

Bottoms, 50, after winning office by less than a percentage point, has made her mark in the criminal-justice realm, which is now at the top of the national agenda. Under the leadership of Bottoms, Atlanta has done away with cash bail for minor offenses, ended cooperation with ICE and raised police pay by 30% while striking a blow against mass incarceration. “We cut our corrections budget by almost 60%,” she notes. “We are converting our city jail into a center of equity, health and wellness.”

In the nation’s urgent quest for a new, less confrontational model of public safety, the Minneapolis city council had pledged the day before we spoke by phone to disband its police department. Bottoms was not ready to do that in Atlanta. “I just hope that people take it city by city, department by department, and not get stuck on these one-liner messages, ‘Defund the police.’ Because it’s a lot more complicated than that.”

She spoke of the 2014 murder of her nephew Darius Bottoms, killed by gang members who mistook him for a rival. “We called the police,” she says. “Who made the arrest of the people who murdered my nephew? The police. And these people are now in prison.”

Talking publicly about family trauma is something Bottoms had to learn. Those who know that her father was the R&B singer Major Lance might remember the crossover hits “The Monkey Time” and “Um, Um, Um, Um, Um, Um.” Her own memories are of the day in 1978 when he was led away in handcuffs; he served three years for cocaine possession and dealing. Bottoms, 8 at the time, recalls the day as “the death of our family.”

“It’s very uncomfortable to wear your scars publicly,” says Bottoms. “But what I saw running for mayor was that it was necessary to show my scars because there was a narrative, at least during the campaign, that somehow I was out of touch and didn’t have any clue as to what it means to struggle.”

Indeed, Bottoms looked sleek and successful. She had a bachelor’s degree in broadcast journalism from Florida A&M and a law degree from Georgia State, and she had been both a magistrate and a city-council member, closely allied with in-cumbent mayor Kasim Reed. She was married to a corporate executive, and their life appeared as well ordered as the names of their kids: Lincoln, Lennox, Langston and Lance.

“I mean, I take as much responsibility as anyone, because professionally you want people to think you are together,” Bottoms says of the need to weave the story of her family’s setbacks into her campaign. “And it was very difficult, because I used to not be able to even talk about that period in my life without crying. I mean, I had lifelong friends who didn’t know that side because it was this well-kept secret.

“But I knew in running for mayor, people had to have a better understanding of who I was and where my heart was. And the other thing I learned: like, the more exhausted I became running, the more authentic. I began to peel back the mask and let people see a deeper side of me.”

She quotes poet Paul Laurence Dunbar: “Why should the world be over-wise/ In counting all our tears and sighs?/ Nay, let them only see us, while/ We wear the mask.” If the original subtext of the poem was race, Bottoms clearly suggests it also applies to politicians–not the kind of admission a politician usually makes. “Well, some of my staff would tell you they work for a politician who hates politics,” Bottoms says.

Yet when I ask about the Obama Administration’s task force on policing, she calls it the “Obama-Biden Administration.” And in the flurry of media appearances since May 29, the mayor has proved a refreshingly effective Biden surrogate. Her advice to President Trump was widely quoted: “He should just stop talking.” A year ago, it was mostly hardcore politicos who took notice when Bottoms endorsed Biden shortly after he had been dressed down in a debate by Senator Kamala Harris. Not anymore. Biden has promised to name a running mate by Aug. 1, and Bottoms has entered a pool of contenders that already included Stacey Abrams, a fellow Georgian. Which may be awkward.

“No, it’s not awkward at all,” Bottoms says. “I think if anything it speaks to just the legacy of Atlanta and how Atlanta has really always been this place where leaders have been built. Especially in the African-American community.”

The city famously had no riots after the 1968 murder of Dr. King. And the recent disturbances did stop, with the onus returning to the cops. On May 31, Bottoms and police chief Erika Shields fired two Atlanta officers for using excessive force on two college students.

What is the country seeing? “What they’re seeing is change,” she says. “The last time we’ve seen this kind of change in this country was over 50 years ago. Not in my lifetime. And so, what I would say is that this is what change looks like in America.” 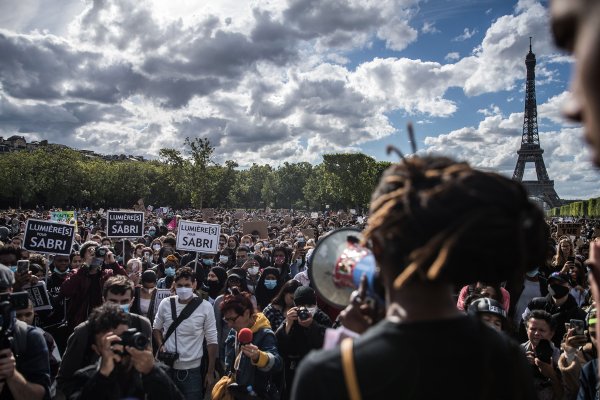 How the World Is Protesting Racism and Police Brutality
Next Up: Editor's Pick