The Asian American Response to Black Lives Matter Is Part of a Long, Complicated History

People protesting the death of George Floyd hold placards up at Lafayette Square next to the White House.
AFP via Getty Images
By Cady Lang

In the United States, issues of race can often be cast along the lines of Black and white — and, especially at a moment when the world is being forced to confront the ways systemic racism is built into the nation’s history, the reasons for that focus are clear. At the same time, the land has never been inhabited by only those two groups, and the ways in which other minorities interact with both Black America and white America offer key insight into that past. Case in point: The complex histories of both anti-Blackness and anti-racist solidarity within the Asian American community.

In this week’s issue of TIME, Pulitzer Prize winner Viet Thanh Nguyen explored the ways in which the “trap” of being a “model minority” creates inequality not just for Asian Americans, but for everyone. That dynamic has come to the forefront especially in light of the presence of Tou Thao, an Asian American officer, at the death of George Floyd. One viral tweet compared Thao to the sole Asian man amid the white bidders in the movie Get Out, while Hasan Minhaj tackled anti-Blackness in the Asian American community in a new Patriot Act clip, noting: “We think we’re not a part of the story, but we’re at the scene of the crime! That’s why the full picture matters. This doesn’t happen in a vacuum — it happens in a system.”

That system is one that has been evolving for centuries, and still influences the work of many Asian American activists today.

In the 19th and early 20th centuries, Asian Americans working as immigrant laborers in the U.S. were villainized (and often subjected to horrendous racial violence) as the sinister “Yellow Peril.” That experience of discrimination created solidarity with the Black community, which, says Renee Tajima-Peña, the producer of Who Killed Vincent Chin? and PBS’ documentary series Asian American, was expressed in a wide range of outlets. Frederick Douglass denounced the Chinese Exclusion Act of 1882, and an Indian immigrant served as the editor of Negro World in the early 20th century.

That connection endured into the decades that followed. But, as with many facets of life in the U.S., things got more complicated around the 1960s.

On one hand, as the civil rights movement introduced new ways of thinking about justice and equality in the United States, Asian American leaders drew inspiration from—and provided support for—Black freedom fighters. For example, after Japanese Americans were seen as threats and sent to detention camps during WWII, that community offered support to Civil Rights leaders trying to repeal the Emergency Detention Act over concerns that Black activists could be subject to the same kind of treatment. The term “Asian American” was coined in 1968 by UC Berkeley students who were inspired by the Black Power Movement; likewise, Asian American students rallied alongside Black student organizers and other ethnic student groups as part of the Third World Liberation Front at San Francisco State and UC Berkeley in the late ’60s, which culminated in student strikes that led to equal education opportunities and the creation of ethnic studies programs. Activists like Yuri Kochiyama and Grace Lee Boggs not only pulled insights from Black radical frameworks for Asian American liberation, but were also strong and active advocates for Black social justice movements.

At the same time, however, the model minority myth was spreading. This idea posited that Asian Americans were more successful than other ethnic minorities because of hard work, education and inherently law-abiding natures. But many of the advances of Asian Americans around the time of the 1960s were not the result of hard work alone, but also of the same systemic forces that held others down—such as immigration policies (like the Immigration and Naturalization Act of 1965, which abolished former anti-Asian immigration laws and prioritized skilled workers) and political spin constructed to counter the civil rights movement.

“Before the model minority myth, Asians and Asian Americans were exploited for their labor, othered, seen as ‘Yellow Peril,'” says Bianca Mabute-Louie, an ethnic studies adjunct at Laney College. “[The myth] came about when Black power movements were starting to gain momentum, so [politicians] were trying to undercut those movements and say, ‘Asians have experienced racism in this country, but because of hard work, they’ve been able to pull themselves up out of racism by their bootstraps and have the American Dream, so why can’t you?’ In those ways, the model minority myth has really been a tool of white supremacy to squash Black power movements and racial justice movements.”

As Mabute-Louie notes, not only does such a myth create a monolithic identity for Asian Americans and render their struggles invisible, but it also drives a wedge between them and other communities of color, primarily Black Americans, because it uses perceived Asian American “success” to invalidate claims of inequality toward non-white Americans. It also reinforces a structure in which assimilation into white society is the primary goal for other ethnic groups.

“To say that this minority is the ‘good minority’ means you’re essentially saying there’s a bad minority, which keeps people divided,” says writer and activist Helen Zia. “The problem is, when you hold a carrot out, some people start believing that we can shed this previous portrayal and stereotype of being the enemy and we can be accepted, we can move up, we can reap the privileges of the white masters, we can maybe even become honorary whites.”

This dynamic did not mean the end of solidarity between the two communities: when Vincent Chin was beaten to death as a result of racism in Detroit in 1982, for example, Black activists like Jesse Jackson were a part of the movement to call for justice for his murder. But it did drive a wedge between them, and that tension has loomed large in the mainstream narrative in recent history, thanks in large part to events that took place in Los Angeles in 1992.

That year, L.A. erupted in protests and riots after four police officers who were caught on camera brutally beating Rodney King, a Black motorist, were acquitted. During the riots, Korean-American businesses appeared to be targets for looting and destruction—which many connected to the 1991 killing of Latasha Harlins, a 15-year-old Black girl, by a Korean immigrant store owner, Soon Ja Du, who shot Harlins after assuming that she was stealing a bottle of orange juice. Although Du was convicted of voluntary manslaughter later that year, the perceived lightness of her sentence helped stoke the flames for the civil unrest ignited for Rodney King.

In the years since, interracial conflict has often served as the primary framework for looking at interactions between Black and Asian American communities. From a 2017 viral video that documented a Korean beauty store owner physically attacking a Black customer he suspected of shoplifting; to some Asian Americans’ advocacy for eliminating race-conscious school admissions; to the division of the Asian American community in New York over NYPD police office Peter Liang, after he was convicted for manslaughter after fatally shooting an unarmed Black man, Akai Gurley, conversations about race between these two communities often center on anti-Black actions and beliefs.

But, experts say, that tension is still far from the whole picture.

“Conflict has always been a central part of the story, but it’s because it’s much more sensational to talk about Asians and African Americans fighting than it is to talk about the day-to-day work of finding solutions to problems and working together,” says producer Tajima-Peña. “Toni Morrison talks about a master narrative, not written by us, and that narrative [of these two communities] has always been conflict and tension.”

Now, as the U.S. sees mass uprisings against racial injustice and police brutality, some see a chance to continue the history of solidarity, and put the history of division to the side. While Asian Americans still experience racism—one only need look as far as the spike in violent anti-Asian attacks in recent months, due to the coronavirus pandemic, for proof—in the United States they don’t experience the same level of structural racism that those who are Black do, and the recognition of that fact has driven many into activism.

“Asian Americans owe so much of their presence in this country to the Black struggle for freedom — from birthright citizenship to the ability to tell our stories in education and the culture to the civil rights we enjoy,” says Jeff Chang, the author of We Gon’ Be Alright: Notes on Race and Resegregation. “We want to be on the right side of history, and that side is squarely in fighting against anti-Black racism.”

Some Asian Americans have focused on calling out racism in a way that speaks specifically to their own communities and families. For example, Letters for Black Lives, an organization that provides multi-lingual resources to help people talk about Black Lives Matter with their families, was started by young Asian Americans in 2016; the group has now updated their templates to reflect more recent news. And Dr. Anthony C. Ocampo, an associate professor of sociology at Cal Poly Pomona, created a slide deck presentation with his cousins to talk to their family about what’s going on in the news and how it relates to structural racism.

Others are creating resources designed to educate and inform Asian Americans about how their history has intersected with Black history. Mabute-Louie has been making shareable Instagram ‘zines that not only address how to fight anti-Blackness, but also provide context about the history of Asian American and Black solidarity. “There are a lot of resources out there on how to be anti-racist and a lot of books about white fragility,” she says. “But a lot of the things I’m seeing is catered and made for white people to engage and we as Asian Americans have a very different journey.”

Ultimately, however, no matter what the method, these activists share a core belief that how Asian Americans respond in this moment will not only reflect this shared history but also help shape the futures of both these communities.

“The power of Asian Americans standing up for Black Lives Matters is that it sends a clear message: the same racist logic schemes that are keeping our communities down might look different in Black communities than they look in Asian American communities, but it’s still the same system. [It’s] meant to relegate us to the margins, to keep us in subordinate positions, to keep us out of leadership positions, to basically be in a position where we can’t write our own stories in this country,” Ocampo says. “We need to be the authors of our story.”

Due to an editing error, the original version of this article misstated how many Asian American officers were present at the death of George Floyd. There was one, not two. 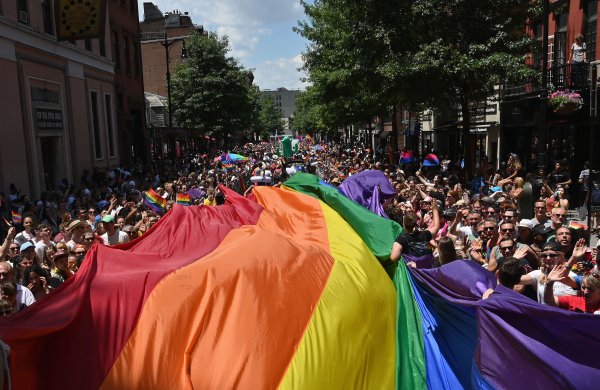 The Unstoppable History of Pride Parades
Next Up: Editor's Pick