Ancient Rome Thrived When the Empire Welcomed Immigrants. We Should Remember What Happened When That Changed

Ancient marble bust of Emperor Caracalla, 212-217. In the collections of the Capitoline Museums, Rome.
Getty Images
By Douglas Boin

Instances of xenophobia shook the cities, each one worse than the next, in the anxious years of the early fifth-century Roman Empire. Doors were slammed in immigrants’ faces when they asked for food, immigrant family members were kidnapped and beaten on the road, an immigrant house of worship was set on fire. One commentator, taking up his stylus to decry the foreign “pestilence” ravaging his comfortable way of life, won instant applause from Latin-speaking audiences. He twittered about contemporary events with matter-of-fact indifference. “Everyone insults the immigrant,” the poet Claudian said.

Among the many ideas modern societies have inherited from Claudian’s Rome, none has had a more pernicious power than his people’s questionable notion of dividing the world into the civilized and barbarian, us and them. A modern version of that antiquated ideology still holds power. For example, even before the pandemic, Trump adviser Stephen Miller—who, the Southern Poverty Law Center has found, has shared material from white nationalist websites—reportedly scoured the federal law code for novel ways to restrict legalized immigration. The arrival of the novel coronavirus has only intensified the Trump Administration’s priorities, offering a convenient pretext to reduce green cards and tighten the borders.

But history didn’t have to turn out this way. The circumstances that led Western Europe and the U.S. to embrace the worst of classical culture demand a second look, now more than ever.

According to tradition, the once-great and formerly welcoming city of Rome had been founded in the eighth century B.C. as an asylum, a Latin word meaning “sanctuary for refugees.” As Rome grew from monarchy to humble republic to unrivaled empire, the Roman people developed a winning formula for ending wars, fostering stability and achieving widespread, lasting economic success: They extended citizenship to non-residents of the capital.

By any conservative account, Rome’s government did so three times by Claudian’s day: first, in its wars of Italian conquest in the first century B.C.; then, during its aggressive period of colonial expansion in the first and second centuries A.D.; and finally, in 212 A.D., when Emperor Caracalla granted citizenship rights to every free-born person in Rome’s orbit. In this multilingual, multiethnic world of nearly 60 million people—a disturbing number of whom were enslaved—hundreds of thousands of people in Europe, Africa and Asia saw their fortunes improve because of Caracalla’s law.

If you lived at the empire’s frontier, citizenship guaranteed your ability to hear a case before a Roman judge. If you grew up at the border, it ensured that you and your family could not suffer arbitrarily at the hands of slave traders, who stole boys and girls like hungry wolves. Citizenship also promoted a widespread public trust in investment and fostered economic growth. Fides, the Roman god of reliability, always looked favorably on citizens who drew up their contracts in writing, or so the Romans believed.

Citizenship had long worked quieter miracles throughout Rome’s long history. After 25 years of service, veterans were regularly handed a diploma, a bronze certificate “folded in two” that recorded for posterity their hard-won citizenship status. They passed it to their children. Outside the military, individuals earned citizenship when struggling families left the Mediterranean for a more precarious—but potentially more lucrative life—on the frontiers. When they petitioned the government to grant them equal resident status to families in Italy, thankful emperors obliged. As Romans and locals married, the picture of a Roman changed.

Stereotyping left a lasting mark on Europe. By the Middle Ages, monks circulated short, alliterative lists, cataloging what they thought to be the worst of foreigners’ supposed behavior, immortalizing tropes they copied from classical writers. Egyptians were evasive, Jews jealous, Gauls gluttons, Saxons stupid. Modern opponents of immigration draw on this same ancient playbook, as if they’re waging a battle against the globe’s new “barbarians.” But they’d better look more closely at the history of what happened to Rome.

After Caracalla’s reform extended citizenship, one generation passed, then the next, but a repeat was not forthcoming. The new waves of new foreigners who wanted a Roman life were met with no such welcome. Even as Rome became noticeably “dependent on the help of these same foreigners for their livelihood” (as the great chronicler of the fourth-century empire, Ammianus, wrote), a more rigid, two-tiered society hardened over time. Citizens and non-citizens lived side-by-side, often in the same towns, but with widely different rights. Roman law variously categorized them as “allies,” “transfers” or “fortunate ones.” Still, no politician ever proposed a policy for releasing them from these second-tier categories.

By Claudian’s day, Rome’s government and its people simply presumed that immigrants would always till their farms, stock their cupboard, and serve at the front lines of the next war, without any reward for their sacrifices. But on Aug. 24, 410, a disgruntled immigrant named Alaric the Goth gave up waiting for change and unleashed a surprise attack on Rome’s unjust empire. Even as the Romans picked up the pieces of their city in the weeks that followed, their political convictions remained stubbornly unchanged. Within a decade, it was widely thought to be more convenient to dissolve the empire than to articulate a strategy for incorporating foreigners within it. By 476, Rome fell apart.

Many policy-makers have drawn the wrong lessons from Alaric’s attack, seeing in it a reason to fear outsiders. But in fact, the long-beating heart of classical civilization had depended on its embrace of immigrants—and for citizens of modern states who aspire to stay united, this turning point in world history invites a closer look.

Douglas Boin is a historian at Saint Louis University and the author, most recently, of Alaric the Goth: An Outsider’s History of the Fall of Rome (Norton). 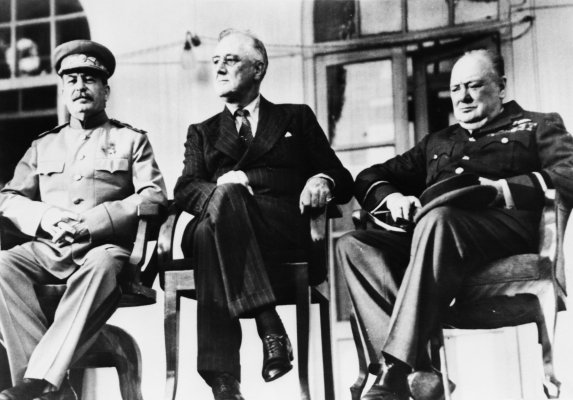 Looking for the Truth About the Nazi Plot to Kill FDR
Next Up: Editor's Pick