Bollywood Stars Are Speaking Out About Racism in the U.S. But They're Getting Backlash for Endorsing Skin Whitening Creams

Priyanka Chopra Jonas at the Pre-GRAMMY Gala and GRAMMY on January 25, 2020 in Beverly Hills, California.
Gabriel Olsen
By Mélissa Godin

As anti-racism protests following the death of George Floyd have spread across the world, Bollywood stars have spoken out against racism in the United States. But on social media, many users are calling these stars “hypocrites” for posting about anti-racism on social media while promoting skin lightening products and remaining silent about police violence against minorities in India.

Priyanka Chopra, an Indian actor and singer who won the Miss World pageant in 2000, faced significant criticism online after writing on Instagram that “there is so much work to be done and it needs to starts at an individual level on a global scale” in reference to the George Floyd protests. “We all have a responsibility to educate ourselves and end this hate.”

Online users were quick to point out that Chopra starred in the 2008 Hindi film, Fashion, where her character feels shame for having sex with a black man. They also noted that Chopra, along with other Bollywood stars such as Disha Patani, Deepika Padukone and Sonam Kapoor Ahuja, have starred in skin whitening advertisements in the past. (Chopra has said in past interviews that she regretted endorsing these products earlier in her career.)

Skin lightening is a multi-million dollar industry in India. Companies like Garnier and Neutrogena often use famous Bollywood stars in their advertisement campaigns. “In India, darker skin is undesirable and fairer [skin is] considered superior by many, irrespective of class, caste, religion,” says Neha Mishra, assistant professor at Jindal Global Law School and an expert on colorism. Mishra adds that through accepting endorsement deals, stars are signaling a disapproval of “black or brown” skin.

Many Bollywood stars also faced criticism for posting in support of the George Floyd protests despite having remained silent about attacks on India’s minority Muslim population. In December 2019, the Indian government passed a Citizenship Amendment Act(CAA) that permits only non-Muslim minorities from neighboring countries to acquire Indian citizenship. The law led to nationwide protests in December. In February, riots broke out in northeast Delhi after a lawmaker from Prime Minister Narendra Modi’s Hindu nationalist Bharatiya Janata Party (BJP) encouraged mobs to clear the streets. Modi, who was busy hosting President Trump on a state visit, was accused of turning a blind eye to mobs that killed Muslims and chanted Hindu nationalist slogans. Meanwhile, police officers in Delhi reportedly encouraged mobs to burn down property belong to Muslims. (Hindus were also killed in the riots, but the majority of victims were Muslim).

While Padukone attended a CAA protest at Jawaharlal Nehru University (JNU) in January, becoming the only A-lister from Bollywood to make a public appearance at these rallies, most have stayed silent on the violence and discrimination against India’s Muslims. Critics say they are only speaking out against racism in the United States because it is now a popular stance to take among celebrities. “Their support was a mere “in thing” to do, to reach a wider audience, while they chose not to do anything about the poor lives, migrant lives in India at all,” says Mishra. “Do they also not matter?” 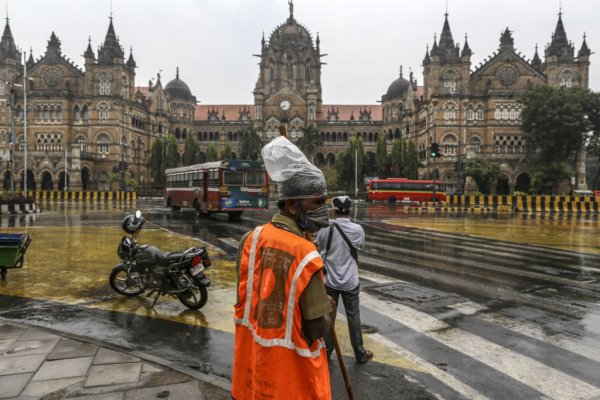 Bodies Left in Hospital Beds in Mumbai
Next Up: Editor's Pick