The aftermath of the killing of George Floyd in Minneapolis has played out not only in protests all across the country, but also in many, many documented examples of alleged police aggression. However, the size and scale of the protests and the lack of context from videos of harsh police behavior makes tracking the past few weeks challenging for even the savviest social media user.

To cut through all this confusion, a group of activist researchers have committed themselves to a major challenge: collecting as many videos of alleged police misconduct during the protests as possible, checking their veracity and assembling all the videos on one Google spreadsheet. So far, it includes more than 300 videos of alleged police misconduct, as well as records of a few unrelated incidents from the last week that researchers found troubling.

The leader of the project is T. Greg Doucette, a North Carolina criminal defense attorney, who tells TIME that he has followed cases of police misconduct for years. He produces a podcast named Fsck ‘Em All, that primarily discusses cases of police conduct, and has shared stories on his social media accounts for nearly 15 years. Doucette said that the current project to collect videos of suspect police behavior began after he posted a list of videos in late May of apparent misconduct on Facebook and Twitter. Over time, more and more people started sending him other clips.

“I think ‘avalanche’ is probably an understatement. I’ve got close to 2,000 messages that I haven’t even been able to open yet,” Doucette, who estimates that he has received upwards of 3,000 messages in total, told TIME.

He says that he hopes the project can show people police misconduct is not a matter of isolated incidents, but a pervasive problem that occurs in police departments across the country.

“You can’t really excuse 350 plus bad apples across 27 jurisdictions all in the span of just one week,” says Doucette. “It’s obvious there’s a cultural rot, a sort of decay within policing in the United States.”

Over the past few weeks, he has worked to verify each video and to share them on his Twitter account with a dose of color commentary. He’s able to sort through many of the videos quickly, because he’s often sent duplicates, and he often recognizes older videos quickly due to his past work on the podcast. Other videos require more time. To verify them, Doucette says he searches to see if they were referenced in a news story, then he checks if the incident was recorded by multiple people on the ground and he looks for other clues as well.

Doucette says that he’s also careful to conduct due diligence if he makes a mistake, issuing a correction on Twitter and then changing the information as quickly as possible on the sheet.

Doucette is not alone in the project. He has been working with several people across the country to organize the videos or create graphics, including California mathematician Jason Miller. Miller connected with Doucette through Twitter and has since assembled the videos in the spreadsheet. Miller tells TIME that working on the project is like a full-time job, but he hopes that the list can help to “memorialize and witness” the protests. As someone who grew up in the suburbs of Minneapolis, it was difficult for him to watch what was happening there.

“[A]s I’ve grown up and matured, I’ve moved out of Minneapolis and I’ve reflected on my relationship with race. I’ve seen how the culture in Minneapolis was not a healthy culture. This is an expression of how I have wrestled with that,” says Miller, adding, “I wanted this information to be freely distributed, and free for people to see.”

Doucette says that for him, personally, he would like to see police reform. He identifies as a conservative but left the Republican Party in response to the election of President Donald Trump and says that he believes both Democrats and Republicans are at fault for defending the police before the American public. He says that as a lawyer, he feels that his job isn’t meaningful unless the police are held to account.

“What we’re taught in school is that all power comes from the people; the people elect their representatives, the representatives hire the bureaucrats, the bureaucrats hire the cops” says Doucette. “They’re supposed to be at the bottom of the rungs of power, and instead we’ve inverted that upside down— where the police are openly declaring war on their own citizens, and the politicians are simply sitting there, diddling their phones, not doing anything.” 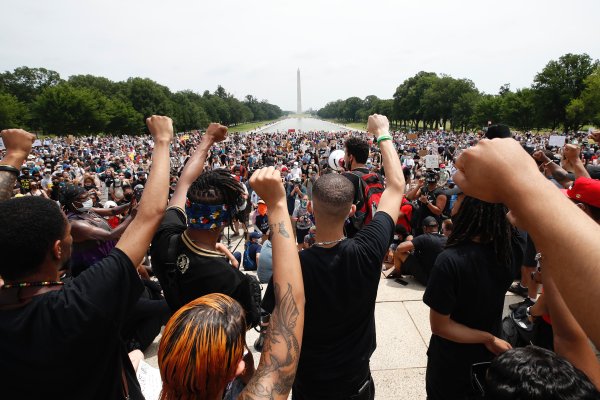 D.C. Protesters See a Watershed Moment
Next Up: Editor's Pick