Athlete and activist Maya Moore owns a unique perspective on the national uprising that’s followed the death of George Floyd. From 2011-2018, Moore played for the Minnesota Lynx and won four WNBA titles; after she and her teammates peacefully protested police violence in 2016, officers walked out of a Lynx game, and the head of the Minneapolis police union criticized the team and belittled the players. And in early 2019, Moore announced she wouldn’t be playing in the upcoming season so she could concentrate on overturning the prison conviction of a family friend, Jonathan Irons, who was handed a 50-year prison sentence in 1998 for burglary and assault with a deadly weapon; Irons was 16 at the time of the crime. Moore is taking a break from the WNBA this season too: though a judge overturned Irons’ conviction in March, he remains in prison as the state of Missouri appeals.

In a conversation with TIME from her home in Atlanta, Moore discussed her experience in Minneapolis, her feelings about the protests that have emerged nationwide, and analyzed the connections between the cases of Irons and Floyd. “Woo, this is heavy,” she says.

(This interview has been edited and condensed for length and clarity).

What has been your reaction to what has unfolded in the past week?

I think I was just sad. That’s the first thing anyone should really recognize. So many people are hurting. That it’s come down to violence it can be a messy mixture of different motives for people. But there’s no doubt a segment of people felt like violence was the only answer because their voices hadn’t been heard and their humanity had been rejected for so long.

That we’re talking about this is huge. That is the first step in healing. One of the helpful things I remember learning from Bryan Stevenson [is] when you look at the the history of different cultures and countries that have gone through really hard times with violence and racism, they acknowledged it, they set up memorials, they have very intentional cultural practices that make sure this never happens again. And so I feel like in America, because we didn’t do that, we’re paying for it. This is the consequence of us not acknowledging one of the most devastating realities our culture. The horrible consequences that happen when you dehumanize a segment of the population for centuries.

I feel myself turning a corner. I’m having conversations with neighbors, just honest conversations. I don’t think people realize how much life it brings when you take that step to engage with somebody. It does so much for reconciliation and healing. There have been spots of hope so I’m trying to lean into those as well.

What lessons do you think we’ve learned from the fallout from George Floyd’s death?

The two glaring things we’re seeing and talking about is what role does racism play in our politics and what role does this culture of excessive force, I can do things and not necessarily pay the consequences, play? What does it look like to reallocate our resources so that police aren’t asked to do things they really shouldn’t be doing. Like sending a crisis counselor to a school or a home instead of a police officer, so police officers have a more narrow lane that they can be really effective in. I’ve been learning about defunding our investment in police force mentality, and reinvesting in, what do young people need? What do people who get involved in drugs need, what do families need outside of money to take care of their families? Economic reallocation, community building, so we don’t need to have this super aggressive police mentality and perspective.

Racism is a mindset that lives within. Our country comes from a centuries-long culture of dehumanizing black and brown bodies. So what role does racism play? A huge role. You can’t downplay how deeply woven and embedded this is in our country. Clearly we’re not over it. We’re just now really starting to talk about it. I don’t want us to underestimate this beast that we’re facing called racism. It’s a real beast and we all have to engage in tearing down.

In 2016, following the killings by police of Alton Sterling in Baton Rogue, La. and Philando Castile in a Minneapolis suburb, Minnesota Lynx players wore Black Lives Matter shirts to a game. “Change starts with us. Justice & accountability,” the shirts read. Four off-duty Minneapolis Police officers working security for the game walked out. What was your reaction to that?

I think that any time you get into an area where it requires humility, and accountability, it’s gonna get touchy. And so I understand the reality of when someone says something that requires you to look at yourself and change, it’s not easy. And so i get that. We were trying do it in a very humble, gregarious way that gave room for the people we were speaking to to humbly engage back. And we can’t force people to do that. If you can’t see or you’re not willing to see the pain and the struggle of someone else, you’re not going to want to come to the table. You’re going to want to keep things how they are. The hard work of change is hard. But if you are not fueled by compassion, you’re just going to continue to try to self-protect. If they ever want to come back to the table, we don’t want to hold grudges, we want to keep trying to tear walls down. So it’s a story that’s still not over, that’s still to be written.

Bob Kroll, head of the Minneapolis police union, commended the walkout: he also called the Lynx a “pathetic draw.” He’s also attempted to defend the four officers charged in Floyd’s death, saying that Floyd had a “violent criminal history.” (Floyd had served in prison for aggravated robbery). If you were at the table with Kroll, what would you say to him?

Those words was mean and disrespectful. We tried to stand up for people who don’t have a voice.

We have a humane system in this country that is called due process. One person or a small group of people don’t become a judge, jury and executioner of another person. Especially an unarmed person. And so I don’t think it’s a healthy mindset to say because this person has done bad things in their past, I can kill them. If you say it out loud, clearly that’s not who we are. The most encouraging thing you can do is to say what’s really going on, and say this was a tragedy. That’s actually the most helpful healing thing you can do. And it’s something that will make me trust you and respect you. I trust and respect leaders that regularly say I could have done this better.

A judge overturned the conviction of Jonathan Irons on March 9, but the state of Missouri has continued the appeals process. How have you dealt with that?

One of the most heartbreaking experiences of this whole thing is from the beginning, the arguments that the state has brought have no factual or legal basis. That’s why the circuit judge from the beginning has taken on this case. He sees the merits of our case. He ruled on those merits on March 9. A month later, an appellate court in Missouri responded with a 27- page opinion agreeing with the circuit judge. We now have four judges who have been shining the light on this situation. But the state has taken every opportunity to resist Jonathan’s release. It would seem the spirit of what they’re doing is not for justice. Jonathan was explaining to me this happens all the time, they try to wear down people so they give up. So we’re experiencing that now. We’re not giving up.

He’s had hard days. Imagine you’ve been in prison for 23 years. Your conviction has been overturned. But because of a few people in the prosecutor’s office you still remain in prison during COVID-19. You’re stuck in a cell, in a box, still for a crime you didn’t commit. This has been some of the hardest couple of months.

In your mind, what’s the connection between Jonathan’s case and what we’re experiencing now?

I think about Jonathan’s situation and how not seeing him as a person worthy of justice is the same root issue of what happened to George Floyd. He wasn’t seen as a human worthy of justice and worthy of dignity. So we’re going to put you at risk of having your life thrown away. That is the root issue that has to change – a reverence for human lie, just acknowledging we don’t come from past of dignifying and humanizing every single citizen. So all of us have the responsibility to do something to move that needle forward.

The sports world reacted, with swift condemnation, to Drew Brees’ comments last week saying that kneeling during the anthem was “disrespecting the flag.” What do you think?

Coming from Drew’s perspective, you are disrespecting something that symbolizes honor. But his perspective doesn’t capture the fullness of the story. It hurt people who have experienced a different America than Drew and his ancestors. As an Olympian, I wear that flag and I’ve gone all over the world. I’ve represented the United States, so I have a deep pride for out flag. My experiences haven’t been the worst of the worst growing up in a middle class black family. I had a level of privilege that Jonathan didn’t. So I’m kind of in that perfect middle space where “I get you Drew, I feel some of that.”

I’m hoping, based on his reaction, that he’s starting to see that. From what I can tell he’s starting to humbly reach in and lean in and engage and say, “hmm, I didn’t know that, I didn’t see that, I didn’t understand that.” And that’s amazing. Keep the conversation going. There’s sort of no way around the pain of it. It’s going to be messy, it’s going to be painful. But that’s not the end of the story. It is a necessary part of we’re going to get through. So I’m looking at that as a win. 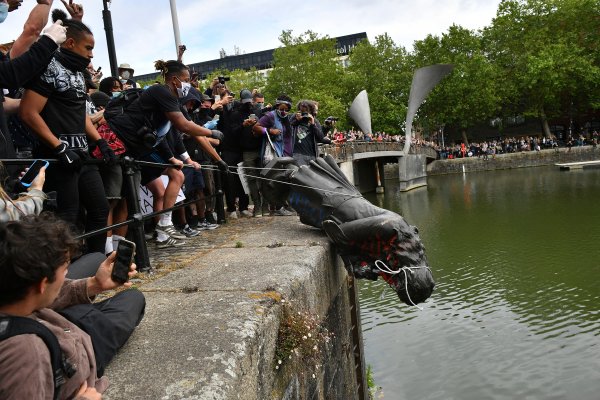 The Growing Effort to Remove Monuments of Europe's Racist Past
Next Up: Editor's Pick