(WASHINGTON) — City workers and local artists painted the words Black Lives Matter in enormous bright yellow letters on the street leading to the White House, a highly visible sign of the District of Columbia’s embrace of a protest movement that has put it even further at odds with President Donald Trump.

D.C. Mayor Muriel Bowser said after the mural was completed Friday that it was intended to send a message of support and solidarity to Americans outraged over the killing of George Floyd by police in Minneapolis.

“There is a lot of distrust of police and the government. There are people who are craving to be heard and to be seen and to have their humanity recognized,” the mayor said. “We had the opportunity to send that message loud and clear on a very important street in our city.”

The letters and an image of the city’s flag stretch across 16th Street for two blocks. The mural ends near St. John’s Episcopal Church, where Trump staged a photo-op on Monday after officers in riot gear fired tear gas and charged demonstrators to make way for the president and his entourage.

A sign now identifies that section of 16th Street near the White House as “Black Lives Matter Plaza.”

A woman is seen in front of a street sign for the newly proclaimed "Black Lives Matter Plaza" near the White House in Washington, D.C. on June 5 2020.
Mandel Ngan—AFP/Getty Images

Bower has verbally clashed with the Trump administration over the handling of the protests. The mayor has complained about the heavy-handed federal response and called for the removal of out-of-state National Guard troops.

She says their differences highlight the need for D.C. to be a state and have more control over its affairs. They may also reflect the fact that Trump is deeply unpopular in the district, where Hillary Clinton won about 90% of the vote in the 2016 presidential election.

While not addressing the painted mural, Trump continued his attacks on Bowser in tweets Friday.

Bowser shrugged off his criticism. “You know that thing about the pot and the kettle,” the mayor said at a news conference.

The local chapter of Black Lives Matter said it did not support painting the street and took a swipe at Bowser. “This is performative and a distraction from her active counter organizing to our demands to decrease the police budget and invest in the community,” it said on Twitter.

On Thursday, as the protests remained peaceful, Bowser ended a curfew imposed after people damaged buildings and broke into businesses over the weekend and Monday. A large demonstration is expected in the city on Saturday, and the city has not yet decided whether the curfew will be reinstated.

The mayor tweeted out a letter from House Speaker Nancy Pelosi, who wrote the president to express alarm that peaceful protesters were being confronted by heavily armed federal agents and officers, many of them with their identities and agencies obscured.

There are thousands of members of the National Guard along with officers and agents from numerous agencies deployed around Washington in case of civil unrest. 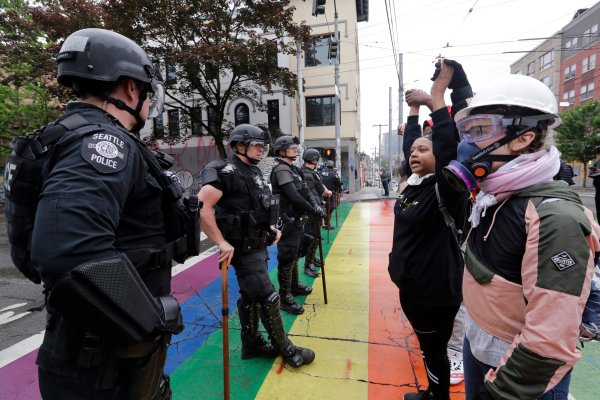