She Wrote a Book About Bias. Here's How She Thinks Police Departments Should Approach Reform

A man kneels in front of a police skirmish line in Oakland California on May 29, 2020.
Josh Edelson—AFP via Getty Images
Ideas
By Belinda Luscombe
Luscombe is an editor-at-large at TIME and the author of Marriageology: The Art and Science of Staying Together.

Jennifer Eberhardt is a Stanford professor and MacArthur Genius award recipient who has worked with several police departments to improve their interactions with communities of color. In her 2019 book Biased: Uncovering the Hidden Prejudice That Shapes What We See, Think and Do, she examines the role that implicit bias—which she defines as “the beliefs and the feelings we have about social groups that can influence our decision making and our actions, even when we’re not aware of it”—plays a role in community-police relations, and how that bias can be overcome, managed or mitigated with evidence-led training. She spoke to TIME about what police departments should be doing now.

You’ve worked with several police departments on improving their practices to make the interactions between the police and communities of color more productive. We have a lot of energy behind reform right now. What would you like to see?

A lot of police departments have these implicit-bias trainings. This is like a huge business now, where you have consultants who can come in and provide that service. But more often than not, those trainings aren’t evaluated, and so we don’t know how effective they are actually at moving the needle in terms of more equitable policing. We don’t actually have data. I’ll go into police departments, and even when they say that they are evaluating the training, it’s more “did you like the training?” It’s not the kind of gold standard. That’s what we need more of. A lot of these implicit-bias trainings have focused on informing people about bias. But I feel like we need to focus on changing the conditions that promote bias rather than simply providing knowledge to people about bias.

Can you give me an example of what you mean?

In Oakland, I and a number of my colleagues were able to help the police department to reduce the number of stops they were making of people who weren’t committing any serious crimes. That was the goal. And we did this by pushing officers to ask themselves a simple question before each stop they made: Is this stop intelligence-led? Yes or no. What they meant by intelligence-led was, did I have prior information to tie this specific person to a particular crime? Just adding that question to the form that officers complete during a stop slows them down. They’re thinking, Why am I considering pulling this person over? We’re trying to push them to use the objective standards that they have and tie people to specific crimes rather than Do I have an intuition about this person? It was kind of a change in mindset at the moment of action.

So in 2017, Oakland officers made about 32,000 stops across the city. And in 2018, with the addition of that question, they made about 19,000 stops. African American stops fell by over 43%. And the crime rate didn’t go up. Stopping fewer black people did not make the city more dangerous. In fact, the city became safer.

And you don’t have to be a police officer to experience the benefit of that. There are simple steps that we can all take to help ourselves reduce the likelihood of bias infecting our decisions and infecting our actions. So there’s like that slow-me-down, that calming down. It’s asking the right questions, it’s holding ourselves accountable.

Has any of what’s happened recently made you rethink any of your recommendations or the models that you’ve been working with?

I guess I appreciate the power of the camera more. This came up with the George Floyd incident, with the cameras by people who were holding their cell phones and witnessing it. Police departments all over the nation have these cameras now, but the vast majority of the footage from police body cameras is not being systematically examined. Oftentimes police departments don’t see the footage as data. They see it as evidence in isolated cases. And so what my team wants to do is to have them think about this footage as data, as information that they can use about what’s happening daily.

In Oakland, we’ve been looking at traffic stops, in particular, because that’s the primary way that the average citizen comes into contact with the police. It’s one of those moments where, depending on the kind of interaction that you have, you walk away with either a worse impression or a better impression of the police. And so we’ve been focusing on that interaction in a lot of ways. In addition to developing training to improve those relations, we’ve also been analyzing footage, to try to understand what’s going on in these day-to-day interactions. We found officers were professional overall, but they spoke less respectfully to black drivers than to white drivers. And we found that that was the case throughout the stop. Even in the first five seconds of the stop, you can see already this respect deficit between how they’re speaking to black versus white drivers, and it lasts throughout the stop.

At the request of the police department, we came in and developed a training where we talked about our findings and provided takeaways to the officers around language use. And now we’re looking at the officers’ footage, pre- and post-training, to see if that change actually really did make a difference in how they spoke to people in real interactions on the street.

Have you felt that they’ve welcomed your suggestions?

It wasn’t researchers coming in, telling cops what they should be doing. There was a deputy chief, LeRonne Armstrong, in Oakland, who put this focus group together, and had people from all sides of the debate, performing all kinds of roles for the police department, so that we could come up with a way to address some of these issues.

Do you support calls to defund the police?

I am actually a believer in police reform. There are lots of things that we could do, to bring about change. And so, a call for defunding that is based on the feeling that the police are bad and that there’s nothing that could be done, no, I don’t support that, if that’s the thing that’s motivating it. I feel like there’s a lot that can be done. There’s a lot that has been done that people are unaware of. There are a lot of levers that we can move to bring about more equitable policing.

In your book Biased you write of studies others have done that show that in heightened situations the police made fewer mistakes than civilians. Is that because they’re trained?

Yes, in these “shoot, don’t shoot” studies participants are supposed to push a button labeled shoot if they see someone who’s holding a gun. And don’t shoot if they’re holding a harmless object. And the finding was that police officers as well as community members are faster to shoot black people with guns than white people with guns. But when you look at the error rate, police officers were less likely than normal people to shoot a black person with no gun than they are to shoot a white person with no gun. And when the researchers looked at what was driving that effect, they found that the more interactive use-of-force training officers had, the less likely they were to show a racial bias in terms of the error rate. If you train officers to do their job better, if there’s intensive training, sometimes you’re also decreasing the likelihood that that bias can play a role.

Think about bias as the sort of automatic associations that people make between African Americans and crime that they practice over a lifetime. If you have training that disrupts that association and pushes you to override it, then you might imagine that that could also decrease racial disparities in terms of their actions.

Is there anything about this current moment that worries you?

Well, it’s a moment in time where everyone’s focused on this, and I think really want to see these issues addressed, and I just hope that the actions that follow are actions that produce that change. And that there would be a role for evidence-based practices. So, for example, why continue to call for just having the implicit-bias-change training, when there’s no evidence right now, or little evidence either way, of whether that is moving the needle? I hope that it’s a moment where we could really dig into these issues and develop a whole array of possibilities in terms of changing things. And changing the interactions between police officers and people of color, especially. 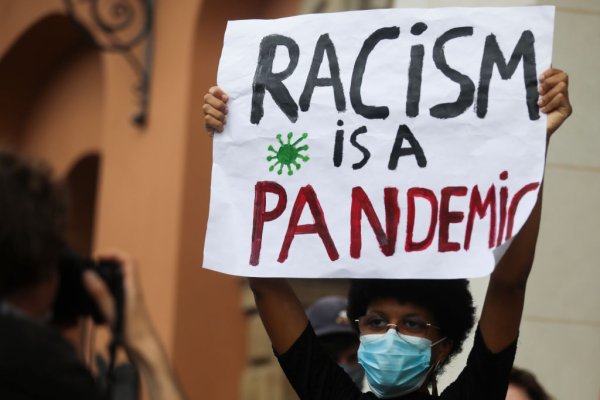 Protesting Police Brutality and Racism Is Essential Work
Next Up: Editor's Pick