'Police Do Not Belong in Our Schools.' Students Are Demanding an End to Campus Cops After the Death of George Floyd

People sit on the street in front of a row of police officers during a rally in Minneapolis on May 29 after the death of George Floyd.
Kerem Yucel—AFP/Getty Images
By Katie Reilly

Student activists across the country are calling for their schools to cut ties with police departments and remove officers from campuses in response to a national uprising against police brutality. And school leaders in Minneapolis and Portland, Ore., have already taken that step.

While debates over the role of police officers in schools have raged for years, activists say the latest high-profile examples of police violence against black people — the deaths of George Floyd in Minneapolis and Breonna Taylor in Louisville, Ky.,— have fueled the argument that police officers don’t belong in schools.

The public school board in Minneapolis voted unanimously to terminate its contract with the city’s police department on Tuesday in response to Floyd’s death. “I firmly believe that it is completely unnatural to have police in schools,” school board member Kimberly Caprini said during the meeting, according to the Minneapolis Star Tribune.

On Thursday, the superintendent of Portland Public Schools said he was “discontinuing” the presence of school resource officers (SROs) and would increase spending on counselors and social workers, the Oregonian reported.

Advocates for police reform and racial justice are hoping more school districts will follow. “It is a huge, huge, huge moment. It feels unprecedented,” says Jonathan Stith, director of the Alliance for Educational Justice, which advocates for police-free schools.

He was participating in a Zoom meeting with organizers as the Minneapolis school board voted Tuesday. “We were listening to the vote, and in addition to all the tears that started to flow, there’s this moment where organizers were like, ‘Who’s got next?'” he says. “We’re excited about what is now possible.”

Stith says the Alliance for Educational Justice is working with organizers in about 20 cities to push their school districts to take similar action, including Philadelphia, Phoenix, Chicago, New York City, Baltimore and Washington, D.C.

School resource officers have been a growing presence in schools over the last two decades — in part as a response to the frequency of school shootings since the 1999 attack at Columbine High School. About 45% of public schools had at least one school resource officer working full-time or part-time on campus during the 2017-18 school year. And 13% had other sworn law enforcement officers working at least part-time, according to the most recent data available from the National Center for Education Statistics. That same year, the shooting at Marjory Stoneman Douglas High School in Parkland, Florida fueled calls for more school security and proposals to arm teachers.

But it’s not clear school resource officers actually improve safety. An SRO at Marjory Stoneman Douglas drew fierce criticism for never entering the school building where the shooting was taking place. And other school resource officers have been accused of harming the students they’re meant to protect. In 2015, a video showed a school resource officer in South Carolina tossing a black student out of her desk, dragging her across the classroom and arresting her for refusing to hand over her cell phone. Last year, cameras captured another SRO in a North Carolina middle school slamming an 11-year-old to the ground twice and dragging him along the floor.

Racial justice advocates have warned for years that school police were over-disciplining and criminalizing students of color. Black students, in particular, are far more likely than white students to be suspended, expelled and arrested in school.

Shortly after the vote in Minneapolis on Tuesday, students in Chicago launched a petition calling on the Chicago Board of Education and Chicago Public Schools to remove police officers from schools and use the $33 million allocated for school resource officers to provide technology and internet access to every student, hire counselors, and support undocumented employees and students living in shelters. “Black and Brown kids know all too well that the cops violently assaulting protestors, are the same ones placed in our school hallways, assaulting and racially profiling us,” the petition said.

Dream Cannon, a junior at Lindblom Math and Science Academy in Chicago and a member of the activist group Assata’s Daughters, thinks the money allocated to school resource officers could be better spent. “I’ve always felt unsafe and uncomfortable around police, especially within my schools,” she says. “Maybe now the message is being amplified because we’re seeing how much police brutality is going on in the world. People are maybe starting to realize that it doesn’t stop at schools. It doesn’t stop when you walk in those doors. It continues.”

Jadine Chou, chief of safety and security for the school district, said in a statement that “we remain committed to continued engagement and dialog about the role of School Resource Officers in our schools,” adding that it’s up to the district’s local councils to decide whether to place officers in each school.

In New York City — where students in the country’s largest school district have been among protesters during a week of demonstrations against police brutality and racism — students and other activists are calling on Mayor Bill de Blasio to remove New York Police Department officers from schools.

Dekaila Wilson, who graduated from a New York City high school in 2018 and works with the youth activist group IntegrateNYC, launched a petition Monday to end school policing, which has more than 17,000 signatures. She says police were a “constant” presence at her high school in the Bronx, and she worries that her younger brothers in elementary and high school are more likely to face discipline as black boys.

Leanne Nunes, the high school executive director of IntegrateNYC and a graduating senior, says she’s tired of worrying about police officers and metal detectors at her school: “It’s basically TSA every morning.”

“My entire high school career—had it not been for the pandemic—would have been spent being policed every day in school,” she says. “It’s too much… Police do not belong in our schools.”

In a statement, a spokesperson for the the New York City Department of Education said they “stand against racism and police brutality,” but did not specifically comment on the petition for police-free schools.

“Our goal is to build that community trust and respect between all students and all staff in our schools to keep students safe,” the statement said. “This is a moment for us to reflect on our shared responsibility to do better by students, listen and continue to make improvements to strengthen our community.”

A spokesperson for the NYPD said school officers are “fully integrated into the school community, from keeping students and staff safe, to mentoring students and providing approachable positive law enforcement officer role models” and pointed to data showing a decrease in arrests over the last three school years.

‘Now is the time to organize’

Many students are calling on schools to do more than just recognize that systemic racism is a problem, comparing some school responses to the “thoughts and prayers” platitude that often follows school shootings.

Chad Gestson, the superintendent of Phoenix Union High School District in Arizona, said in a statement that he had postponed a vote on school resource officers and would “continue to denounce, in both word and deed, acts of racism, hate, oppression, and violence.”

But students asked district leaders to do more to protect students of color, demanding they terminate the district’s agreement with Phoenix police and defund the nine school resource officers in the district, which serves 27,000 students across 20 schools.

Joseeduardo Ramos-Valdez, a senior at Linda Abril Educational Academy in Phoenix, joined the Puente Movement’s youth-led #CopsOuttaCampus campaign during his freshman year after he says he was wrongfully arrested while walking home from school one day because he “fit the description” of a suspect in a nearby robbery.

He says he has found school resource officers to be more intimidating than helpful, and he’s hoping the school board will take action. “They can’t act like they don’t see what’s going on in reality,” he says. “They can’t sugarcoat it. They can’t hide from it. They just have to call it what it is. Officers don’t keep students safe.”

Mo Canady, executive director of the National Association of School Resource Officers, which trains school-based officers, says their role is “about so much more than protecting against a violent intruder.”

He says school resource officers can be a positive presence when they’re carefully selected and specifically trained to work with adolescents. “I hate to see a school district miss an opportunity to have really good SROs helping to restore a community and move criminal justice forward in a positive way,” he says.

But Matt Gonzales, director of the Integration and Innovation Initiative at NYU and a member of de Blasio’s School Diversity Advisory Group, questions why schools need to be a place for bridging the gap between the police and the community. “I don’t think public schools are places to rebuild trust with the police. If we’re going to continue to have a policing state and system, then police need to do work outside of schools to heal the harm that they’ve caused,” he says. “I don’t think using schools as a way to do that is productive.”

As protests fuel awareness of police brutality and spark calls to reform or disband police departments, the campaign to end policing in schools has also gained traction among some education groups and local teachers’ unions.

“Each horrific incident of state-sanctioned violence against black Americans intensifies the trauma for black students, already suffering disproportionate isolation and fear from the COVID-19 pandemic,” the National Association of Secondary School Principals said in an open letter Wednesday, calling on school leaders to “recognize and address the racial disparities in our discipline policies and our academic systems, and in our use of school resource officers.”

The Minneapolis Federation of Teachers, and now the Chicago Teachers’ Union, have supported the push to cut ties with their respective police departments. Stith says he’s hoping to see support from the country’s largest teachers’ unions, the American Federation of Teachers (AFT) and the National Education Association (NEA).

Randi Weingarten, AFT president, says the union supports local decision-making on the issue of police in schools. She says the AFT — which counts school resource officers among its members—”completely supported” the decision in Minneapolis, but has also supported communities that hire more school resource officers for protection, naming Newtown, Conn., as an example after the 2012 shooting at Sandy Hook Elementary School. “Even if you have police in schools, there must be real reform,” she says. “It must be a community policing model where police are part of school life, where they are not enforcers.”

The NEA did not immediately respond to a request for comment. In a previous statement responding to Floyd’s death, the organization called on teachers to “examine how white supremacy culture impacts our biases, our practices and the policies in our own schools and communities.” 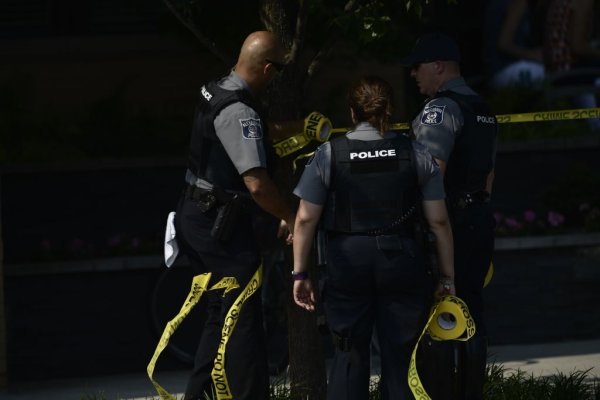 Seven People Found Dead Inside Burning House in Alabama
Next Up: Editor's Pick