A blood sample is held during an antibody testing program at the Hollymore Ambulance Hub of the West Midlands Ambulance Service in Birmingham, Britain, on June 5, 2020.
Simon Dawson—EPA-EFE/Shutterstock
By Alice Park

One of the more insidious features of the new coronavirus behind COVID-19 is its ability to settle into unsuspecting hosts who never show signs of being sick but are able to spread the virus to others.

In a study published June 3 in the Annals of Internal Medicine, researchers at the Scripps Research Translational Institute reviewed data from 16 different groups of COVID-19 patients from around the world to get a better idea of how many cases of coronavirus can likely be traced to people who spread the virus without ever knowing they were infected. Their conclusion: at minimum, 30%, and more likely 40% to 45%.

Such so-called asymptomatic spread is unique for a respiratory virus; most cause symptoms and disease once they infect their hosts. SARS-CoV-2, the virus responsible for COVID-19, is, however, particularly wily because it can also infect hosts silently and use them as unwitting pawns in its infectious campaign. “The range we found is extraordinarily high,” says Dr. Eric Topol, director and founder of the Institute and one of the authors of the paper. “That means the range of what can happen with SARS-CoV-2 is from no symptoms to [death]. That’s not at all similar to any virus or pathogen we’ve experienced that has killing potential in the past. What we have here is an extraordinary spectrum, including this quiet, stealth mode of infecting somebody.”

Topol and his co-author, Daniel Oran, searched for published and unpublished studies that included asymptomatic people and focused on 16 different groups of people screened or tested for COVID-19 around the world. Among others, these included a cohort of more than 13,000 people in Iceland who volunteered to be tested for COVID-19 (the largest group included), as well as residents of Vo, Italy; passengers on the Diamond Princess cruise ship where an outbreak occurred; visitors to homeless shelters in Boston and Los Angeles; prison inmates; college students; and nursing home residents in King County, WA.

Five of these studies included follow up testing of the participants; they showed that only a small fraction of people who were asymptomatic when they tested positive the first time then went on to develop symptoms. That allowed the researchers to distinguish between people who are pre-symptomatic—those who test positive but eventually go on to develop symptoms—and those who are truly asymptomatic, and test positive for COVID-19 but never develop obvious symptoms. Among the more than 2300 people sampled in the Vo population, none of the 41% who had no symptoms when they tested positive ever developed symptoms over a 14 day period.

That wouldn’t be worrisome if it weren’t for other research beginning to show that levels of virus in people who are asymptomatic are similar to those among people who develop symptoms. That suggests that while they may not be outwardly showing any signs of illness, asymptomatic people are still carrying a potentially dangerous burden of infectious virus that they can spread to others.

Another concern, says Topol, is that the virus may be damaging the bodies of asymptomatic in other, silent ways. Among the 331 passengers on the Diamond Princess cruise ship who tested positive but did not have symptoms, 76 people had CT scans of their lungs and nearly half showed signs of lung tissue damage typical of coronavirus infection. “People who are getting infection without symptoms are actually doing a lot of damage to their bodies and they don’t know it,” says Topol. Another small study in South Korea that studied 10 asymptomatic people from a group of 139 COVID-19 patients supports these findings.

Putting all of the data together, he says, supports “basically the reason why we have to all wear masks—because nobody knows who is an asymptomatic carrier. The person doesn’t know it and the person’s contacts don’t know it. That has enormous implications and it’s an area we need to study more, on how to test people without symptoms on a very large scale to understand these people better and follow them to determine precisely their ability to transmit [the virus].”

Given that public health officials aren’t testing the entire population, there are still huge gaps in understanding what asymptomatic disease, he says. Are people infected but not showing symptoms because their immune systems are better at controlling the virus, or because the virus they harbor is somehow less potent? Or are these people asymptomatic because they have immunity to other, more prevalent coronaviruses that are responsible for the common cold and therefore already might already have a level of protection against SARS-CoV-2 as well?

Another question that the data raise involves how long asymptomatic people are infectious. In Topol’s analysis, the cases from U.S. aircraft carrier U.S.S. Theodore Roosevelt suggests that they may be able to spread the virus for longer than the presumed 14 days, which would have wide-ranging implications for public health policies focused on reopening cities and states safely—and further support the need for wearing masks in public settings.

While widespread testing of populations would be a way to capture more of these asymptomatic cases, and help public health officials to educate these people about the need for social distancing and other measures to prevent the spread of the virus, Topol says there’s a need for other options as well. He and his team are studying changes in heart rate that could be captured on smartwatch apps and fitness bands and might signal possible infection. Such changes may not be useful on an individual level, since heart rate changes can be attributable to a number of different factors including stress and heart disease. However, if, for example, resting heart rate levels for a specific community rise and remain high for a period of time, that could indicate a possible COVID-19 cluster and flag individuals and their doctors to increase testing and follow up care in the community.

“If even a portion of the 100 million Americans who have a smartwatch or fitness band are involved, then we could go in and do studies for information we are missing now—antigen testing, antibody testing and we can look for transmissibility,” says Topol. “The priorities during a pandemic are absolutely to look after the sick. But we also shouldn’t miss how important this area of asymptomatic spread is to understand. For every one person who is sick, there are a whole lot of people who have the virus and don’t know it.” 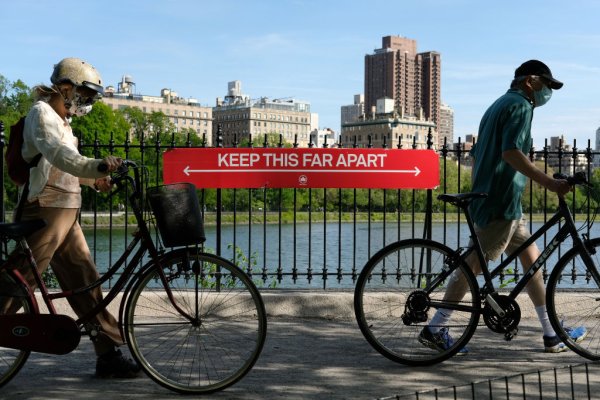 Anyone Living in Areas With 'Widespread' COVID-19 Transmission Should Wear Masks, WHO Says
Next Up: Editor's Pick