Meet 5 Dads Who Have Upped Their TikTok Game Amid Coronavirus

With families around the world staying home amid coronavirus, more and more parents are becoming breakout stars on TikTok as the video-sharing app continues to grow in popularity. But while there are, of course, plenty of TikTok moms who deserve recognition — like the mom with the stereotypical Jersey accent who makes the best schmear — today we’re spotlighting some of the dads who have entertained millions of viewers in recent months.

Even in the midst of a pandemic, it seems as though dads can be counted on to keep their kids laughing with stereotypical dad hijinks ranging from dancing to Ariana Grande to impersonating a dinosaur. As one dad who TIME spoke to put it: “I love to make the kids laugh. I’d pretty much do anything to make them laugh. It’s like jet fuel.”

As TikTok has transformed into a hub for activism in recent months, TikTokers have begun shaping political events with involvement in campaigns to flood the registration drive for President Donald Trump’s June 20 rally in Tulsa, Okla., with false ticket reservations and leave thousands of negative reviews for Trump’s 2020 campaign app on the Apple App Store. But when it comes to these lighthearted videos, their creators generally share the hope that they’re able to provide viewers with a moment of laughter or a smile amid everything going on throughout the world

Whether it’s with one-off appearances or hilarious recurring bits, here are five dads who have taken dad-ing to a whole new level on TikTok.

After 20-year-old Avery Topkis returned to her parents’ house in March to remotely finish out her sophomore year at Emory University amid coronavirus, her sister shared a joke with her that she thought their dad, Bobby Topkis, would really appreciate. So she decided to film his reaction to it. What resulted was a video of Avery running up to and unleashing the zinger on her unsuspecting father that has been watched nearly 12 million times on TikTok.

Unfortunately, TikTok has removed the sound from the original video. But Avery has since made a viral habit out of dashing up to her dad with phone in hand to get his thoughts on her latest joke. For his part, Bobby says that he never knows a new video is in the making until he hears his daughter’s signature scurrying footsteps.

Whether it’s stuffed animals playing a high-stakes game of cards or holding a funeral for one of their own, 10-year-old Tiana Rainwater’s elaborate playtime setups are more than deserving of her father’s hilarious TikTok breakdowns. And although Tiana isn’t the one sharing the videos, she’s definitely the behind-the-scenes star of Brandon Rainwater’s viral “What was my daughter doing last night” series.

Whenever there’s something amiss about the scene at hand, the usual suspect is a large white teddy bear who Rainwater refers to simply as “the bear” and always seems to be getting up to something suspicious. “The bear’s always the one who seems to be doing a little extra,” he says. “So to me it was easy to just say, ‘Hey, everybody seems to be having fun except for him. What is he doing?'”

And the best part? Tiana’s now in on the fun. “Now she’s getting even more creative with them,” Rainwater says. “She’ll be like, ‘Hey dad, I’ve got a couple of ideas and I don’t know where I’m going with them, but we need to go to Dollar Tree so I can grab a couple things.’ And I’m just like, ‘Alright, let’s go.'”

The dad who was just trying to abide by mask guidelines

For his part, Hengky says that he thought it was just a regular mask. But he’s since heard tell of his viral fame from family members, coworkers and even his chiropractor. “There were spikes and there were holes around the mouth and there was a metal sidepiece on his cheeks that he kept on flicking,” Vicky says. “I just thought it was so funny because he didn’t know what it was.”

And while some commenters have been requesting a follow-up on Hengky’s shenanigans, Vicky says that she’s waiting for another hilarious moment to happen naturally. “I think it really needs to come organically for it be funny,” she says. “I just have to keep my camera vigilant at all times.”

The dad who knows how to nail choreography

So begins 19-year-old Kam Kurosaki’s uber-viral TikTok of his dad, Hasan Kurosaki, dancing along to Ariana Grande’s “7 Rings” while playing Just Dance with his little sister Kaylin. In the video, which has been watched over 8.6 million times since May 13, Kam looks disbelievingly on as his dad breaks out some serious moves while giggling away. “I never expected to wake up and find my dad going full Arianator with my little sister,” he says. “I knew as soon as I heard them laughing and Ariana’s song playing as loud as it was, especially in the morning, I had to capture whatever I was about to witness.”

Due to some language in the captions, we’re linking out to Kam’s original video here. But you can watch Pops’ reaction video, which Kam says he almost likes more than the original, above. “My dad was actually in disbelief when I first told him,” Kam says. “He doesn’t use social media so he doesn’t fully understand what I do beyond just my art and photography. But once I told him Oprah had shared my Tiktok of him and Kaylin dancing, he was even happier than I was.”

The dad who turns into a dinosaur at his daughters’ command

When it comes time for any special occasion — especially one involving cake — in the Mannella household, there’s a simple rule to live by: Beware the Dadosaur.

Of course, when 21-year-old Olive Mannella started posting TikToks of her dad, Frankie Mannella, unleashing his inner dinosaur, she had no idea how much people would enjoy them. Although she says he’s been doing crazy things to make her and her sisters laugh their entire lives, it wasn’t until she shared a video of him turning his destructive dinosaur persona on the family’s Easter cake despite her mom’s objections that the internet truly got a taste of how far he’s willing to go to to get a rise out of his kids.

“Dadosaur” has since turned into a recurring bit that frequently racks up hundreds of thousands of views. And Olive says all she or her sisters have to do to get another video in the works is wait for the perfect opportunity to say the word aloud. “Any time I say that word, a whole dinosaur is unleashed in my father and it’s quite entertaining to see how that plays out,” she says. “Sometimes we’ll think of funny scenarios for it to come about, but he never knows about it and my mom definitely never knows about it because my mom’s reaction is probably half the fun.”

As for why the series is so popular, Frankie says that he thinks it boils down to the relatability of family craziness amid this period of isolation. “I think why the Easter cake one took off was just that a lot of people related to it. We were all going crazy in quarantine,” he says. “My wife comes around and she’s okay with it all, but at times she gets kind of mad and I think everyone was just relating to that energy of a family where someone’s a little wilder and someone’s a little more responsible and the kids just enjoy the whole process.” 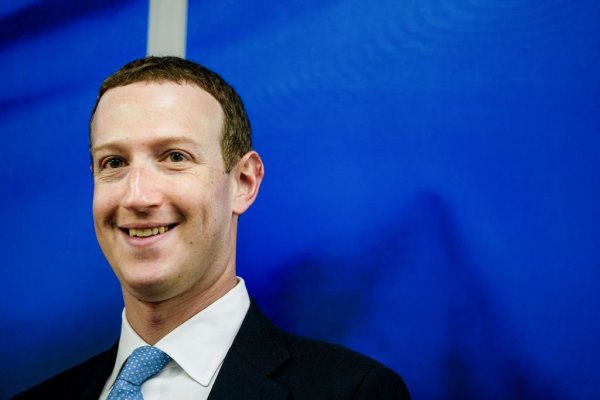 Mark Zuckerberg Went Surfing in Plenty of Sunscreen and It's the Internet's Latest Meme Fixation
Next Up: Editor's Pick