Navy Veteran Freed After Being 'Held Hostage' In Iran, Returning to U.S.

In this 2018, file photograph released by lawyer Mark Zaid, Michael White, right, is seen with his mother, Joanne White.
Courtesy of the White family—AP
By Glen Carey / Bloomberg

(Bloomberg) — Michael White, a U.S. citizen and Navy veteran imprisoned in Iran since 2018, was released on Thursday and is en route home, a family spokesman said in a message that thanked President Donald Trump’s administration and former New Mexico Governor Bill Richardson.

“For the past 683 days my son, Michael, has been held hostage in Iran by the IRGC and I have been living a nightmare,” according to a statement from Joanne White that was posted on Twitter by spokesman Jonathan Franks. “I am blessed to announce that the nightmare is over, and my son is safely on his way home.”

The move comes days after Sirous Asgari, an Iranian scientist imprisoned in the U.S., was deported from the U.S. on June 2 after being accused by federal prosecutors of trying to steal research secrets from Case Western Reserve University, according to the Associated Press.

White left Iran aboard a Swiss goverment aircraft, AP said. The apparent prisoner trade represents a rare sign of diplomacy between Washington and Tehran as the U.S. continues to ramp up sanctions on the Islamic Republic over its nuclear program.

In March, Iran released White on medical furlough, partly answering a call from the U.S. to free prisoners as a goodwill gesture amid the coronavirus outbreak. White, who has been suffering from cancer, was detained in July 2018, just before leaving Iran, for reasons that remain unclear.

The navy veteran from Imperial Beach, California, spent 13 years in the U.S. military before retiring for medical reasons, according to Franks. He was deployed during Operation Desert Storm on the USS Abraham Lincoln, where he served as a data clerk, he said.

“I am incredibly grateful to the administration, especially the team at the State Department for their work on Michael’s case and I owe the Swiss diplomats who have worked so hard to keep Michael safe a debt I can never repay,” White’s mother wrote.

The Trump administration has made freeing American prisoners abroad a key foreign policy priority. Secretary of State Michael Pompeo in April warned that any country “wrongfully” detaining Americans will be held “strictly responsible” if they become infected and died of the coronavirus.

After White had left Iranian airspace, Trump tweeted that he “will never stop working to secure the release of all Americans held hostage overseas!”

Iran’s often competing intelligence agencies have a long record of targeting Iranians with dual nationality as well as foreign nationals, detaining them on vague security charges and then using them to gain leverage in negotiations with Western countries, often over financial and political disputes.

The Islamic Revolutionary Guard Corps’ intelligence arm continues to arrest Iranian dual and foreign nationals on vague charges such as “cooperating with a hostile state,” according to the World Report 2020 by Human Rights Watch. At least a dozen of these individuals remain behind bars, deprived of due process, and are routinely subjected to pro-government media smear campaigns, it said. 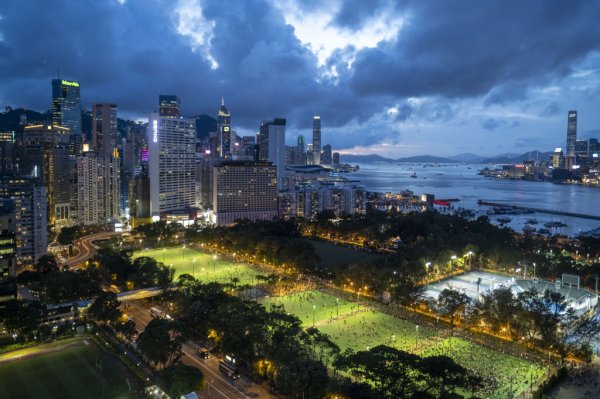 Hongkongers Commemorate Tiananmen Anniversary Despite Ban
Next Up: Editor's Pick