Hundreds of people are being detained illegally in New York City in violation of their right to an arraignment within 24 hours of their arrest, the Legal Aid Society alleges in a lawsuit filed against the New York Police Department (NYPD) Tuesday night, which demands the detainees’ immediate release.

When the suit was first filed it alleged that at least 108 people were being illegally detained in Manhattan. As of Wednesday morning that number had now risen to at least 295, the Legal Aid Society tells TIME. Legal Aid claims that many people have been held since Saturday.

For the past week thousands of New Yorkers — and hundreds of thousands around the world — have taken to the streets to protest police brutality and demand justice for the murder of George Floyd, a black man who was killed during an arrest in Minneapolis on May 25. While the majority of protests have been peaceful, some demonstrations have grown violent, as the NYPD on multiple occasions has turned tear gas and rubber bullets on crowds. Some protesters have allegedly engaged in arson and looting.

At least 1,500 people have been arrested in New York since Floyd’s murder, according to the Associated Press. At least 700 people were arrested by the NYPD on Monday and as of Tuesday night around 400 people in Manhattan were awaiting arraignment, according to The City. In an attempt to contain the unrest, New York City officials implemented the city’s first curfew in 75 years on Monday — it is set to run from 8 p.m. to 5 a.m. ET through the week.

The New York Unified Court System did not respond to TIME’s request for comment, but in an interview with The City on Tuesday, a spokesperson for the New York Courts said that the delay in arraignments is in part because the NYPD has not swiftly filed information for criminal complaints. “To docket the case and arraign someone, the court needs the arrest paperwork to be processed, which the Police Department is doing glacially,” Lucian Chalfen, a courts spokesperson, told The City.

“We are working as fast and safely as we can,” the NYPD tells TIME in a statement.

“This flagrant violation of law by the New York City Police Department appears to be designed to retaliate against New Yorkers protesting police brutality,” Tina Luongo, attorney-in-charge of Legal Aid’s Criminal Defense Practice, said in a statement on Tuesday.

Luongo argued that under New York’s recent pretrial reforms — which removed bail requirements for many misdemeanors and non-violent crimes — most detainees should be released on their own recognizance once they’re arraigned. “Instead, these New Yorkers are now being held illegally, deprived of due process and needlessly subjected to increased risk of contracting COVID-19, endangering each of them as well as the entire community,” she continued.

“The accusation that officers are retaliating against New Yorkers who are protesting is disingenuous, exceptionally unfair, and perhaps deliberately ignoring the fact that the Police Department is dealing with a crisis within a crisis,” Patricia Miller, Chief of the Special Federal Litigation Division of the New York City Law Department, said in a statement to TIME. “We will respond in court.”

The 1991 case Roundtree v. Brown set the standard that an individual arrested in New York must be arraigned — the formal reading of charges with the opportunity to enter a plea — within 24 hours of their arrest. Legal Aid tells TIME that, as of Wednesday morning, 400 people were being detained illegally due to their lack of arraignment throughout all of New York City: 295 people in Manhattan, 77 in the Bronx, 26 in Brooklyn and one in Queens. The suit filed on Tuesday night is specifically on behalf of those detained in Manhattan.

The suit comes amid increasing concern around the safety of New York City jails during the coronavirus pandemic. For months New York was the epicenter of COVID-19 in the U.S. and, as of Wednesday, at least 16,933 people have died from coronavirus in New York City alone, according to the New York City Department of Health.

The spread of COVID-19 is particularly difficult to contain in detention facilities because of crowding and the potential introductions of the virus by new intakes, the CDC found in May report. According to The Legal Aid Society, as of May 27 at least 348 people currently in Department of Correction (DOC) custody in New York City have had confirmed cases of COVID-19. New York City correction officers have also been hit particularly hard by the pandemic; as of May 20, at least 1,259 officers had been infected and six had died, per the New York Times.

Savannah, 24, tells TIME that she was detained in Manhattan for over eight hours after being arrested while protesting on Monday night, before being charged with unlawful assembly and released with a court summons. (TIME is withholding her full name as her court case remains pending.) She said that she was transported to a detention center in a van with eight other people “all very close together with our masks down so we were worried about contracting [coronavirus].”

Many NYPD officers were also working without masks on properly, Savannah adds.

While the women she was transported with were put in holding cells that only allowed two people at a time, she claims the men were put in a large holding cell all together. She alleges that some officers “kept asking if we were antifa and [that we should] call George Soros to bail us out.”

The NYPD did not respond to TIME’s request for comment on Savannah’s claims.

The Legal Aid Society says the NYPD’s actions are similar to the mass arrests that took place in 2004 during protests of the Republican National Convention. The Society filed a similar suit against the NYPD at that time — arguing that protesters were being held illegally against their right to the 24-hour window for arraignment — and won. 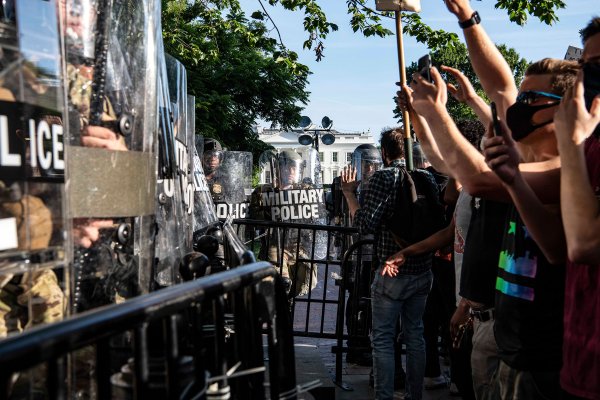 The U.S. Military Must Stand up for Its Soul
Next Up: Editor's Pick