(ARLINGTON, Va.) — A county in northern Virginia pulled its officers out of the District of Columbia Monday night after they played a supporting role in clearing protesters from a park outside the White House so the president could walk to a church for a photo opportunity.

The Arlington County Board issued a statement Monday night saying its officers were used “for a purpose not worthy of our mutual aid obligations.”

That cleared a path for President Donald Trump, who had just issued a statement from the Rose garden vowing to crack down on protesters, to walk from the White House over to St. John’s Church, which had been damaged in earlier protests. Trump then posed with a Bible for a few minutes.

County Board Chair Libby Garvey said on Twitter she’s “appalled” that the mutual aid agreement was abused “for a photo op.”

D.C. Mayor Muriel Bowser, for her part, said Tuesday that the District of Columbia never put out a call for mutual aid.

“I might suggest their officers shouldn’t have been there in the first place,” Bowser added.

In a phone interview, Garvey said the aid request came from U.S. Park Police, and that the agencies have provided aid to each other routinely over the years. She said Arlington Police were helping in the District Saturday and Sunday without incident.

What was unacceptable Monday, she said, was using officers to facilitate “a press op.”

In Richmond, Virginia Gov. Ralph Northam said he rejected a federal government request to send the Virginia National Guard to the District in part because the troops were not requested by Bowser and because he didn’t believe in the mission.

“I am not going to send our men and women in uniform of a very proud National Guard to Washington for a photo op,” he said at a news conference Tuesday.

An Arlington police spokeswoman did not immediately return an email and phone call asking how many officers were deployed and what level of force they engaged in.

Lafayette Park is under federal control, and as such provided the Trump administration an opportunity to demonstrate the aggressive moves Trump said should be taken to deal with demonstrations nationwide that have veered from peaceful to violent.

But Bowser expressed criticism at her news conference of the use of force to clear protesters under such circumstances.

“I didn’t see any provocation … especially for the purpose of moving the president across the street.” she said.

Metropolitan Police Department Chief Peter Newsham said the city was not informed of the presidential movement until right before it happened. Newsham said his officers were not involved in moving the protesters out of Trump’s way.

Most Popular on TIME
1
Asian Americans Are Still Caught in the Trap of the ‘Model Minority’ Stereotype. And It Creates Inequality for All
2
Masks Are Effective Way to Limit COVID-19
3
How the 'Karen Meme' Confronts the Violent History of White Womanhood 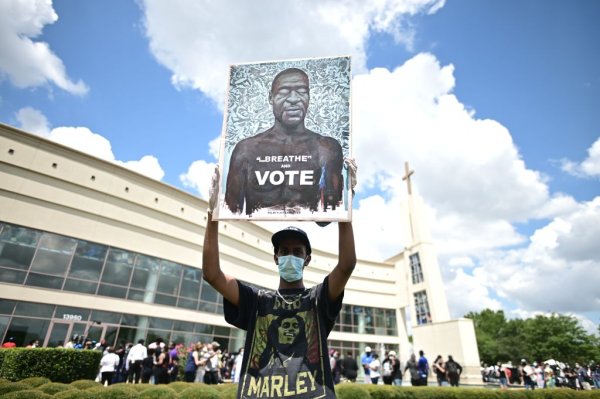