I Was Charlottesville’s Mayor During the ‘Unite the Right’ Rally. Trump’s Callous Response to a Grieving Nation Is No Surprise

White nationalists participate in a torch-lit march on the grounds of the University of Virginia ahead of the Unite the Right Rally in Charlottesville, Virginia on Aug. 11, 2017
Stephanie Keith—REUTERS
Ideas
By Michael Signer
Michael Signer, a practicing attorney and author, served as mayor of Charlottesville from 2016 to 2018. He is the author of Cry Havoc: Charlottesville and American Democracy Under Siege.

During the “Unite the Right” rally in Charlottesville in August 2017, far-right, white-nationalist militias chanting “Jews will not replace us” clashed with counterprotesters over the planned remove of a statue of Confederate General Robert E. Lee. After the rally was disbanded, a young neo-Nazi weaponized his car, ramming into a large group of counterprotesters, killing one and injuring dozens of others. Soon after, Donald Trump notoriously said there were “very fine people” on “both sides.”

So it was with shock, but not surprise, that I watched Trump react to the violence unfolding in Minneapolis with a similarly callous tone, not only failing to condemn violence, but saying “when the looting starts, the shooting starts” and calling the protesters “thugs” (a term he usually employs for African Americans). This was in notable contrast to recent tweets he’d sent encouraging heavily armed, largely white protesters occupying Michigan Governor Gretchen Whitmer’s office to protest her shutdown in relation to the COVID-19 crisis.

I was Charlottesville’s mayor during the “Unite the Right” rally. I was appalled by Trump’s reaction, and I said at the time what I and so many others in my grieving city believed—that blame for the invitation of extremists into our politics went to the “doorstep of the White House.”

Trump’s reaction seemed to me so aberrant that it would put Charlottesville in a small category of touchstones in modern American history. But with his response to the events in Minneapolis, I believe now that Charlottesville was not only a uniquely horrifying event, but also a prologue to a pattern that includes Minneapolis and, now, the nation’s capital with his extraordinary decision to stage a photo op holding a Bible in front of St. John’s Church after police teargassed protesters to clear a path.

Like Minneapolis Mayor Jacob Frey, who shook his head in disbelief when he was told that Trump had attacked him as “weak,” I was initially dumbfounded that the President of the United States would do anything other than healing, consoling and helping us find a path forward. Then I read Antisocial by Andrew Marantz, which explains how Trumpism depends on intentionally employing racial animus to stoke his “base” of Americans prone to a populist message of white American nationalism.

That’s what happened in 2016. Despite losing the popular vote by 3 million, Trump stoked white-nationalist grievances among enough voters susceptible to those appeals in battleground states. Every time he did something that seemed an unthinkable gaffe against ideals of inclusion, it was a feature, not a bug, of his politics. On a platform built on resentment of “others,” he won the Electoral College and the presidency.

When Joe Biden launched his presidential campaign with the word “Charlottesville” and said he’d decided to run for President because the “Unite the Right” rally showed how the “soul of the nation” is at stake in the Trump era, I applauded, writing a Washington Post op-ed celebrating Biden’s recognition that Trump’s politicization of extremism was making the country at once less safe and less democratic.

Fast-forward to today. Just as in Charlottesville, Trump has seen Minneapolis not as a grieving city to console, but as a chess piece in his battle to figure out the electoral map in his favor. Again, his words have been framed to divide his base from “others” they can blame for the conflict—the “thugs” he described in his tweets, then, later, “Antifa.” He has gone so far as to attack Mayor Frey as a “very weak radical left mayor”—yet another “other” to pitch Trump’s base against.

There is plenty of evidence that Trump’s manipulations can backfire. His egregious conduct after Charlottesville helped prompt an unprecedented political repudiation of him and the Republican Party in Virginia. In the statewide election that followed, the Democratic Party claimed landslide victories. The following year, a local official named Corey Stewart ran against Senator Tim Kaine in a neo-Trumpist campaign in which he defended Confederate flags. He was soundly rejected at the ballot box; meanwhile, Democrats reclaimed the state House of Delegates. Biden is now leading by 10 percentage points in national polls. Just as happened after Charlottesville, it turns out that the combination of callousness and incompetence may be the beginning of the end of Trumpism, rather than the keys to a white-nationalist kingdom.

Once the violence is quelled, Minneapolis could become a new kind of prologue—to a final rejection of white nationalism in our politics, to shutting down political violence, and to community-based healing that can bridge our divisions, rather than exploit them for political gain. 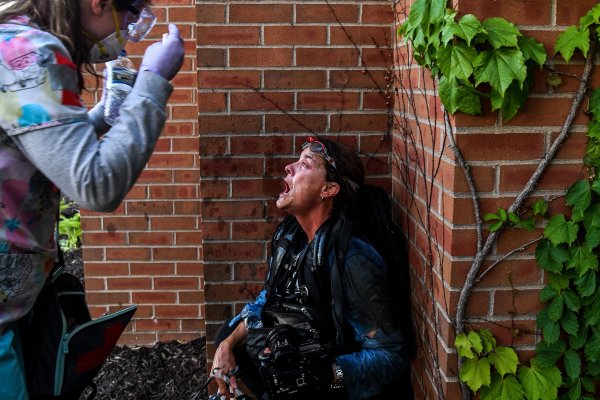 Watchdogs Investigate Uptick in Assaults Against Journalists
Next Up: Editor's Pick