Amid Mass Arrests in Washington D.C., One Resident Sheltered More Than 50 Protesters in His Home Overnight

During demonstrations in the nation’s capital on Monday night, one Washington, D.C. resident allowed more than 50 protesters to take shelter in his home overnight after they were reportedly pepper-sprayed and attacked by police officers.

A 7 p.m. curfew was imposed by Washington D.C. Mayor Muriel Bowser on Monday; according to Mayor Bowser, 25 minutes before the curfew started, federal police used “munitions on peaceful protestors in front of the White House.” This was seemingly to allow President Trump to stage a walk from the White House, where he had held a press conference at 6:30 p.m., to the nearby St. John’s Church. A supply and support station for protesters that had coalesced outside the church was broken up by police and federal officers using tear gas to allow for the President’s arrival.

Later on that evening, Rahul Dubey was sitting on his stoop in the Dupont Circle neighborhood, a mile or so from the White House, watching police setting up a brigade near his house, preparing to arrest those who were still on the streets after the curfew. Some protesters later reported that officers were blocking all possible exits from the streets they were being corralled into.

On Tuesday morning, Dubey told ABC affiliate WJLA that protesters had started coming up to his home and sitting on his steps. Some asked if they could use his bathroom and charge their phones.

The police presence in his street soon grew chaotic, Dubey said. Crowds began to amass in front of his house (as well as other residences) as police unleashed pepper spray at protesters and threw others on the ground.

“It was like a human tsunami on my stoop and I opened up the front door and … I hung on to the railing and everyone that was on my steps started running into the house,” Dubey said. Police continued to shoot pepper spray through the windows, he said, at those who had found safety inside.

Social media footage seemingly shot on the street — and from those inside Dubey’s house — shows many protesters who were unable to escape being arrested by police. D.C. news station NBC News4 reports that 194 people were arrested in the vicinity of Dubey’s residence on Monday night.

In an overnight interview with Esquire, Dubey also claimed that police officers employed “trickery” to entice the protesters to leave his residence. “They send decoys to the door, telling them they can’t leave out the front, but if they leave out the back alley, they’ll be safe, Dubey told the magazine. “They just hijacked the pizza delivery guy for an hour.”

Most protesters stayed Dubey’s home until the city’s curfew ended at 6 a.m. Tuesday morning. Dubey says many of them have since texted him to let him know they are home safe. “I’m absolutely grateful that these heroes and these souls were able to find shelter inside our home, Dubey said. “That was the number one thing throughout the entire night.”

Speaking the next morning just after leaving his home, one protester spoke briefly with NBC News 4. “We need a lot more Rahuls out here,” she said. 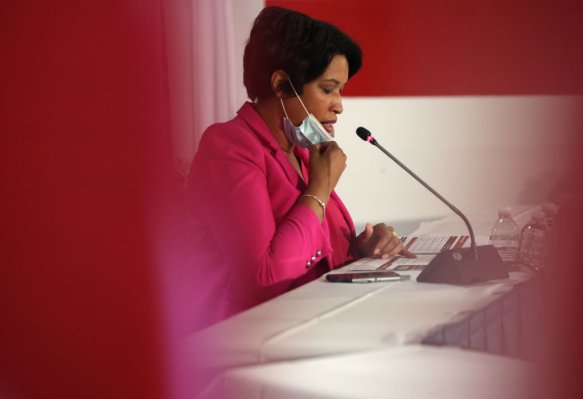