Thousands of Hong Kong protesters defied a police ban Thursday night to stage an annual vigil on the anniversary of June 4, 1989 — the date that Chinese tanks rolled into Beijing’s Tiananmen Square to crush a student-led democracy movement.

For the past three decades, semiautonomous Hong Kong has been the only place on Chinese soil allowed to openly hold a mass memorial. But in an unprecedented move that spurred criticism, the government canceled this year’s event, citing the coronavirus outbreak and the need for social distancing.

Just hours before activists started filtering into Victoria Park anyways, risking fines and arrest, Hong Kong’s legislature criminalized insulting China’s national anthem. Anyone found guilty of mocking the “March of the Volunteers” can face up to three years in prison and a fine of up to 50,000 Hong Kong dollars ($6,450).

Opponents perceive the bill as an infringement on the city’s freedom of speech and see in its passage the further erosion of the civil liberties the set Hong Kong apart from the rest of China.

Tensions are already running high after Beijing’s recent moves to tame anti-government protests that paralyzed the Chinese-ruled city for the second half of 2019.

Fresh protests broke out at the end of May after the Chinese Communist Party (CCP) announced plans to impose a national security law targeting acts of subversion and secession. It will most likely be wielded against anti-government protesters, but it has also raised questions over how long Beijing will be willing to tolerate dissent in the wayward enclave, including the commemoration of sensitive historic anniversaries.

In Victoria Park on Thursday night, protesters made their anger and frustrations apparent as they attempted to dismantle the warren of metal barricades and police tape. Others waved the protest flag calling for the “revolution of our times.”

A retired school teacher who asked to be identified only by his surname Yeung due to safety reasons called the national anthem bill “a direct restriction [of] our freedoms.”

The 65-year-old says he has observed the Tiananmen anniversary every year since 1989, when he watched it happened on the television. “It’s my duty,” he says. “I have to stand up, speak out.”

More than 3,000 riot officers were deployed to enforce the vigil ban, according to local media reports. Soon after people began convening in the park, a loudspeaker warned them they could face prosecution for assembling there.

The Hong Kong Alliance in Support of Patriotic Democratic Movements in China, the group that organizes the annual vigil, called on people around the city to light a candle at 8 p.m. and to observe a moment of silence at 8:09 p.m. from any location.

Lee Cheuk-yan, chair of the alliance, tells TIME he believes political motives were behind the decision to ban the event since locally transmitted coronavirus cases have dwindled.

“If they are so afraid of the virus, if they think the virus is so dangerous to public health, how come they have allowed schools to open?” he says.

While bars, beaches, schools and churches have been allowed to resume operations, the government on Tuesday extended a ban on gatherings of more than eight people for another two weeks. It also extended compulsory quarantine measures for residents arriving from outside Hong Kong.

When police rejected an application to hold this year’s vigil, saying the event would pose a “major threat to public health,” veteran democracy campaigners were alarmed. Some took it as further evidence of Beijing imposing tighter control.

“The June 4 vigil has always been a political irritant to Beijing,” says Andrew J. Nathan, a professor of political science at Columbia University, who co-edited the book The Tiananmen Papers. “Now that Beijing is intensifying control of Hong Kong, it has the opportunity to put an end to this commemoration on Chinese soil of resistance to authoritarianism.”

A symbol of Hong Kong’s autonomy

Hong Kong has long been the main site to publicly commemorate the bloodshed at Tiananmen. Though the official death toll is unknown it is widely believed that hundreds if not thousands were killed.

The anniversary remains a taboo subject on the mainland. An official investigation was never held, and the few who attempt to commemorate it are imprisoned. Even internet searches for any related terms—like the date it happened—are blocked by China’s censorship apparatus.

But in Hong Kong, the event draws huge, somber crowds. More than 180,000 were estimated to have gathered in Victoria Park last year. Religious leaders, pro-democracy activists, witnesses and relatives of those killed typically give speeches on the hardcourt soccer field. Unlike the violent clashes between police and protesters that have flared over the last year, the vigil is known to be a peaceful event. Attendees last year stuck around after to collect the garbage and scrape up candle wax.

The former British colony was reunified with China in 1997, eight years after the Tiananmen bloodshed. But the handover treaty settling the territory’s future had already been inked long before the military crackdown. The images of soldiers suppressing a nascent democracy movement many Hongkongers had actively supported did not bode well for the city’s own aspirations of universal suffrage.

“In 1989 [Hong Kongers] were traumatized by the Beijing massacre; and they cannot forget about it,” Jean-Pierre Cabestan, a political science professor at Hong Kong Baptist University, tells TIME. “The vigil has been part of the Hong Kongers DNA since then, a way to reaffirm Hong Kong identity, distinctiveness, political freedom and autonomy.”

Students clean the "Pillar of Shame," a memorial for those killed in the 1989 Tiananmen crackdown, at the University of Hong Kong on June 4, 2020.
Billy H.C. Kwok—Getty Images

But in recent years, some younger Hong Kongers have shied away from the vigil, saying it is too focused on the past. Others split over the organizing group’s goal to build “a democratic China,” calling it not progressive enough. Many activists want greater democratic freedoms in the territory, and increasingly are calling for independence in Hong Kong as a way to express their hostility toward Beijing, even though most do not think it is feasible.

But on Thursday night, the ban on the vigil and the passage of the national anthem law galvanized some young supporters to come to the park.

“I came because of the recent [protest] movement,” says Rico a 22-year-old university student who gave a pseudonym. He says this is only his second vigil, after he joined an anniversary four or five years ago.

“We’re gathering tonight to show people how much we don’t like the CCP and [to] remind people in the world what the CCP did 31 years ago and what China is doing to Hong Kong now,” he says.

Worries for the future

Many fear that the impending national security legislation will make commemorating the Tiananmen anniversary too dangerous next year. Although the law is aimed at outlawing acts like secession, subversion and terrorism, such charges are regularly used on the mainland to stifle dissent.

“In future years, even if there’s no public health rationale for banning the commemoration, I anticipate that the authorities will find other justifications,” says Nathan, the professor at Columbia University.

Former Chief Executive CY Leung acknowledged in an interview last month that the annual vigil and its organizer could both fall afoul of the new national security law, depending on how the legislation is written by Beijing.

Protesters in Victoria Park were not optimistic. “This is probably the last June 4 gathering that Hong Kong will have, maybe the last one ever in China,” says Rico.

In Macau, the only other place within China allowed to commemorate the Tiananmen anniversary, authorities also banned this year’s vigil due to concerns over COVID-19, although there have not been any new confirmed cases in the gambling mecca for almost two months. Approval was also revoked for Macau’s annual, open-air photo exhibition on the massacre.

“The problem is, like in 1989, we are facing the same brutal regime,” says Lee, the Hong Kong vigil organizer.

Despite this year’s ban on the gathering, some Hongkongers still found other ways to mark the anniversary. Candles were lit in apartment windows, while smaller events, like readings and church services, were planned across the city.

Jeffrey Wasserstrom, historian and author of Vigil: Hong Kong on the Brink, told TIME that it is possible to imagine a future for the city in which there are no more officially approved large-scale vigils on June 4.

“If that happens, some people will surely find creative ways to keep the tradition of commemoration alive,” he says, “but in subtler ways than a big gathering at Victoria Park.”

This year, even with the annual event technically banned, thousands of flickering candles once again illuminated faces young and old in Victoria Park. During the moment of mourning, they all fell silent.

Vigil attendees vowed to keep up the tradition of the candlelight rally, whatever happens. “I will never forget,” says a man who identified himself as Uncle Chan, 75. “If next year we cannot come here, we can use another place to continue to remember this day.” 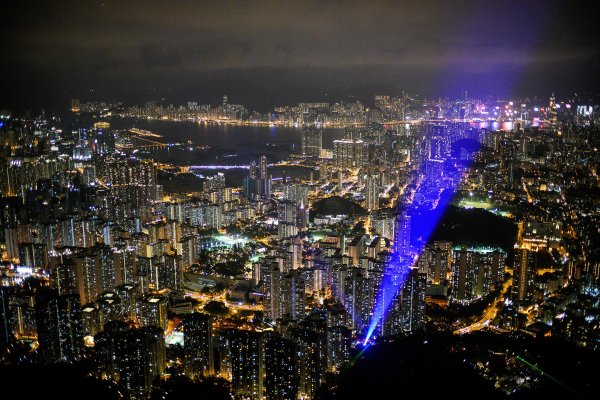 Hong Kong Is Caught in the Middle of the Great U.S.-China Power Struggle
Next Up: Editor's Pick