Mark Clennon, 32, is a photographer living in Harlem with his wife, and three-month-old daughter. On May 30, five days after George Floyd’s killing in Minneapolis, Clennon went out to photograph a peaceful protest winding through Manhattan.

The energy was different to other protests, and I had to go out. Part of it was that everyone’s faces were covered and you just had to look people right in the eye.

I started walking from Harlem on 125th Street. Not long after that, there was a police altercation and I kept walking with the crowd. At one point, I saw Korey Wise of the Exonerated Five. I photographed him supporting people. He didn’t want to make a big deal of it. He explicitly didn’t want to attract any attention from law enforcement. I respected his history and moved on.

Korey Wise of the "Exonerated Five" in New York City on May 30.
Mark Clennon

Walking further down Fifth Avenue, I knew Trump Tower was ahead, so I hopped on a Citi Bike and cycled to the front of the crowd. When people got there and noticed it was Trump Tower, the whole protest stopped.

I spotted a man. I never saw the front of this man’s face. I never spoke to him. I snapped about 10 photos and the first one is the one I used. I kind of waited for him to raise his fist. I had a feeling he would. Parts of the crowd kneeled for a bit and then people started getting rowdy, shaking the barricades before eventually moving on.

During the protest, I kept making sure I took photos of signs with Breonna Taylor’s name on it. This specific case with Floyd is about black men, but the black women who were involved in the protest were the loudest voices on behalf of the black men. I feel like many black women are frustrated that these deaths don’t spark in the way that many men’s deaths do.

Protesters marched from Harlem to Times Square on May 30.
Mark Clennon

A short while later, in Times Square, I was standing on a barrier and could see my friend Chris and his girlfriend Ria at the intersection of Seventh Avenue and 41st Street. On the loudspeakers, the police were saying, “This is an unlawful assembly.” Then an officer, who they were not even looking at, grabbed them. These are my friends so I just started running toward them and was pushed back.

“What did they do?” I was asking the officer. I was yelling loudly the whole time, I had my camera above my head, just snapping and trying to make sure my friends were safe. It was like a scuffle. Fortunately, I found Chris and stayed with him as he was processed and placed in the van. He yelled out his mom’s phone number to me.

Ria Foye as she is arrested in Times Square after peacefully marching from Harlem on May 30. She was detained for more than seven hours.
Mark Clennon

I went back home after Chris’ mother confirmed that she was on her way to the precinct. I decided to take the train back to Harlem. I knew once the sun went down, it would be a little worse.

I posted the image of the protest at Trump Tower just before 9 p.m. I was just sharing an image that encapsulated how I was feeling about being black in America today. I could tell people were responding to it. People were reaching out to me from Brazil, Germany, Russia, from all over the world. I didn’t realize how people would react to the image. Today it has over 33 million impressions on Twitter alone.

But it’s tough — it’s tough for me. I feel a certain weight because I made that image and people are responding to it. This has happened because somebody was killed. As I look at that picture, its meaning has evolved. I think that picture was bigger than that one moment and represents the past few years since the Trump Administration has been in Washington.

I had never noticed the flag inside the Trump Tower all the times I passed it before, but in that moment, I was an active participant in that protest. I’m chanting, too, and my fist is up. The American flag behind the glass, in that gold, gilded case, it’s inaccessible to me. I have an urge to just break through that glass because that flag is for me, too. That’s the visceral feeling I had when I noticed the flag, and I think that’s the feeling this man had when he saw it, too.

I’ve been to many protests, so instinctively I just knew where to be. But I would actually not like to experience any more of these uprisings. In an ideal world, there would be no need. I went out that day to make sure a black voice got to tell our story. I wanted to give the protests the nuance they deserved. In a way, my audience was my daughter, I wanted her to see what the world was like in the first few months of her life.

A protester walks by officers in Times Square on May 30.
Mark Clennon 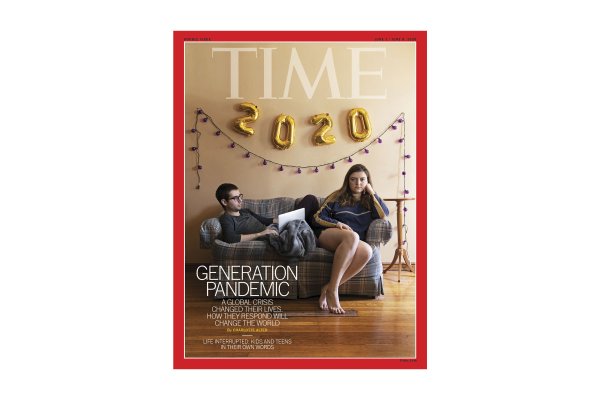 Meet the 23-Year-Old Photographer Who Shot the Cover of TIME's Generation Pandemic Issue
Next Up: Editor's Pick