President Donald Trump speaks before signing an executive order aimed at curbing protections for social media giants, in the Oval Office of the White House, on May 28, 2020.
Evan Vucci—AP
Ideas
By Tom Wheeler
Tom Wheeler was chairman of the Federal Communications Commission from 2013 to 2017. He is currently a senior fellow at Harvard Kennedy School Shorenstein Center and a visiting fellow at the Brookings Institution.

With the signing of yet another executive order on May 28, Donald Trump embraced limits on free speech via social media that echo the practices of the Chinese government. After engaging in Orwellian doublespeak about “my commitment to free and open debate on the Internet,” the President of the United States instructed regulatory agencies to open proceedings that would allow the government to intrude into the editorial decisions of online platforms.

This is pure, coarse political coercion. In the middle of a heated political campaign, the President is specifically tasking the Federal Communications Commission (FCC) to take on the partisan task of determining acceptable speech. This is not a request to assure all sides of an issue are presented but one that would empower the government to determine whether an editorial decision made by an online service is “taken in good faith.”

Fortunately, no executive order can change the law by itself. Surely, the President and the attorney general who stood beside him for the signing are aware of this. Such an awareness exposes the action as the crass political strong-arming that it is.

Fortunately, the FCC cannot simply rubber-stamp the President’s directive. The law under which the agency operates mandates an opportunity for the public to comment on any such proposal.

Fortunately, the courts will have the final say over what the FCC decides (and maybe even a say on the executive order itself). Donald Trump has used the theater of a staged executive order signing before, only to have the courts pull the action back as beyond the law.

Unfortunately, the goal of the executive order appears to be less about actually changing the law than coercing social media platforms to provide favorable coverage for Donald Trump during the election season. In that regard, Jack Dorsey, CEO of Twitter, has shown spine and principle, while Facebook has shown accommodation and appeasement.

Yes, the dominant internet platforms have become too powerful, wantonly taking our private information and turning it into a corporate asset that is used to squash competition. Yes, a business model built around making money by dividing citizens into tribes and feeding them what they want to hear is dividing the nation. Yes, the federal government has for too long had a hands-off policy that allowed the online service providers to make their own rules.

The time has come for the Congress to step up and deal with the adverse results of the internet’s “move fast and break things,” much like they dealt with the adverse effects of industrialization in the 19th and 20th centuries. This includes sensible content moderation. But Donald Trump’s presidential performance does not move that process forward.

The target vehicle for Donald Trump is only a portion of what policymakers must deal with: Section 230 of the Communications Decency Act. Passed in 1996 when the internet was fledgling services such as AOL and Compuserve, the act protects online platforms from liability for what others post. Of equal importance – and the President’s target – is the law’s protection against being sued for the editorial decisions an online provider makes.

Ironically, Twitter has been Donald Trump’s medium of choice for disseminating misinformation, disinformation and lies. The provisions of Section 230 have been the President’s friend by shielding Twitter from responsibility for Trump’s malevolent tweets, thus allowing them to continue. Only when Twitter stands up and refuses to traffic in untruth does Trump suddenly discover his concerns with Section 230.

The cold calculated coercion of the executive order came after Twitter made the editorial decision to add factual information to balance the nonfactual statements of the President. Reportedly, the trigger was the May 26 tweet, “There is NO WAY (ZERO!) that Mail-In Ballots will be anything less than substantially fraudulent…this will be a Rigged Election.” To this falsehood Twitter added a line underneath, “Get the facts about mail-in ballots” with a clickable link.

The Trump-appointed chairman of the FCC Ajit Pai responded to the President’s request saying, “this debate is an important one,” and that the FCC would “carefully review” the proposal. This is the same chairman who repealed the net neutrality rules on the grounds they violated the First Amendment, and that the agency lacked authority over the networks that deliver information such as social media. But when Donald Trump says he wants regulation of that information, the issue suddenly becomes “important” and worthy of “careful review.” Such “careful review” should be the rapid dismissal of the attempt to co-opt the FCC into becoming a tool in the Reelect Donald Trump Campaign.

“I have the right to do a lot of things that people don’t even know about,” Donald Trump said a few weeks before the executive order. Those powers do not extend to the adoption of China-like governmental supervision of social media free speech. 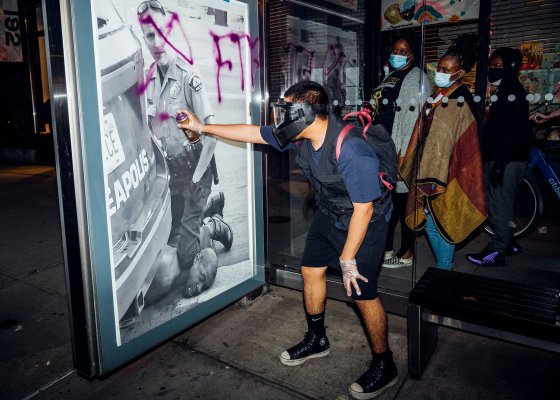 We Cannot Wait for America to End Racism
Next Up: Editor's Pick