A demonstrator spray-paints a poster of Derek Chauvin’s knee on George Floyd’s neck on May 31. “Out of nowhere, this guy pulled out a purple spray can and just started writing on it. These ladies were walking by and paused to look at it. They were looking at it, like, Is this to attack us or to stop us from being silent?”
Malike Sidibe for TIME
Ideas
By Eddie S. Glaude Jr.
Glaude, the James S. McDonnell Distinguished University Professor at Princeton University, is the author of Democracy in Black: How Race Still Enslaves the American Soul and the New York Times bestselling Begin Again: James Baldwin's America and Its Urgent Lessons for Our Own

George Floyd was murdered, and it was captured on camera. Minneapolis police officer Derek Chauvin had his knee pinned against Floyd’s neck for close to eight minutes. We heard a haunting repetition of the words “I can’t breathe.” Floyd cried out for his deceased mother and called out for his children as he desperately clung to life. Chauvin sat there, smug, hand in his pocket, with little regard for the man dying underneath the pressure of his knee. All of this over someone allegedly trying to use a counterfeit twenty-dollar bill at a local deli.

Floyd’s death has sparked outrage and protests. As people demanded the arrest of the officers involved, many wore masks and tried to observe, as best as they could, social distancing. COVID-19 hasn’t stopped killing people, and Minnesota is barreling towards its peak. The state will hit 1,000 dead within days. As a country we have surpassed 100,000 dead, 40 million unemployed, and African-Americans across the country have been disproportionately hit. The virus plunders lives and the police continue to kill.

Dressed in riot gear with gas masks and carrying weapons, police in Minneapolis confronted people in the streets. The protests turned violent. Some looted Target and, along with an AutoZone and other buildings, set it on fire. They attacked and burned the Third Police Precinct. Parts of Minneapolis are still on fire, and President Trump tweets about shooting looters. I was struck by the early images from the streets: a Muslim woman wearing a black hijab and a mask, with brilliantly white sneakers, kicked a tear gas canister back at the police. In another a black woman wearing her mask ran frantically between parked cars as policemen with automatic weapons prepared to shoot rubber bullets. She didn’t take off her mask.

Two men walk with their fists up during a peaceful demonstration on the west side of Manhattan on May 31.
Malike Sidibe for TIME

How does one live in such a time? What happens in your bones, on your insides, when you’re ravaged by disease and hatred? For those African-Americans who have lost loved ones and their jobs, who find themselves in long lines at food banks, who have to deal with the ongoing stress of a virus that can strike at any moment, how do you manage the trauma of loss and the terror of seeing another Black person killed by the police?

Even if you turn your head away, the images and the sounds continue to haunt. We play them over and over again. It’s part of a ritual practice, a way the nation manages its racist sins. People declare their outrage. They, mostly white people, wonder how could this happen in today’s America? They cry out for justice. Or, as in the past, the likes of Fox News decry it all as the victimizing screeds of people who refuse to take personal responsibility. They defend the police. They condemn the violence. Wash. Rinse. Repeat. And nothing changes.

I watched the Floyd video and completely lost it. The stress of the times combined with the cruelty of the act and Floyd’s desperate plea broke me. I found myself, which I rarely do, burying my head into my hands. Weeping. I thought about all the Black people who may watch the video in the middle of this pandemic and about the white people who would see it and ask the all-too-familiar questions about how do we change.

We are caught in a double bind. We need the video footage to convince white America that what is happening to us is real. But that same footage then becomes the stuff of spectacle. People’s appetite for black suffering, to borrow a formulation from Susan Sontag, “is as keen, almost, as the desire for ones that show bodies naked.” In either case, we are left dealing with what white people think and confronting the undeniable fact that black people are still being killed by police at alarming, horrifying numbers. To be honest, these days, I can give less than a damn what white people think.

George Floyd’s death, along with Breonna Taylor’s and Ahmaud Arbery’s, bring into full view the terror and trauma that shadow Black people experiences in this country. Covid-19 has not changed that. It has only intensified matters. In fact, terror, trauma, and coronavirus are knotted together like thick briar bush with thorns.

One wonders how we will survive it all. That will depend, in part, on white America’s willingness to leave the shibboleths of American racism behind—to give up this insidious belief that because they are white they ought to be valued more than others. But we cannot wait on them. We, those of us who will dare to actually learn from our history, must figure out how to be together differently in a New America. 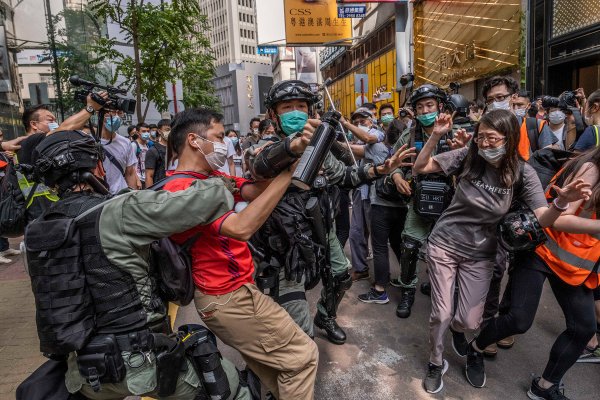 Hong Kong Cannot Prosper Without Autonomy
Next Up: Editor's Pick