Tensions between Twitter Inc. and Donald Trump soared after the social-media platform warned users that the president broke its rules against violent speech, prompting critics to accuse the company of unfairly censoring one of its most prominent users.

On Friday Twitter slapped a rule-violation notice on a Trump tweet warning protesters in Minnesota that “when the looting starts, the shooting starts.” Earlier this week Twitter added a fact-check label to two Trump posts that made unsubstantiated claims about mail-in voting. Infuriated, Trump responded with an executive order Thursday that aims to curb some of the legal protections social media sites have regarding content on their sites.

Twitter has long faced calls to both clean up the toxic culture on its site and to remove Trump, who has tweeted falsehoods and misleading information to his 80 million followers. After years of largely staying on the sidelines, the company has recently become more active in policing commentary from public officials.

The shift has inevitably outraged many of Trump’s supporters, who claim the site is biased against conservative voices. Twitter’s crackdown also opens it up to charges that its fact-checking is inconsistent. On Friday, just hours after Trump’s Minnesota tweet was flagged, the chairman of the U.S. Federal Communications Commission challenged Twitter over a bellicose posting from Iran’s top leader asking if it also violated the company’s rules.

“Serious question for @Twitter: Do these tweets from Supreme Leader of Iran@khamenei_ir violate ‘Twitter Rules about glorifying violence?’” Ajit Pai said in a tweet. He attached screen shots of May 22 tweets from Iranian Supreme Leader Ali Khamenei predicting the eventual elimination of Israel.

Some of Twitter’s initial flags on officials’ posts were related to misinformation about Covid-19 that the company deemed potentially harmful. Racial violence is another area open to abuse on the site and a topic Twitter Chief Executive Officer Jack Dorsey has taken personally. In 2014 he marched in protests and documented rising tensions in Ferguson, Missouri, after the police shooting of an unarmed black man.

Trump’s tweet early Friday referred to protests in Minneapolis, which have turned increasingly violent. A police station was set on fire by demonstrators protesting the death of a black man in police custody. The president used Twitter to assail Minneapolis’s mayor, Jacob Frey, as weak and said he had told Minnesota Governor Tim Walz that “the military is with him all the way, ” and that if there was any difficulty, “we will assume control but, when the looting starts, the shooting starts.”

“We’ve taken action in the interest of preventing others from being inspired to commit violent acts,” Twitter said in a statement on its @TwitterComms account. It said the company had kept Trump’s tweet live “because it is important that the public still be able to see the Tweet given its relevance to ongoing matters of public importance.”

The president’s tweets about the situation in Minneapolis incited a strong response from other Twitter users, but those replies have since been hidden or removed by the company. The options to reply and like the tweet have also been disabled, while the retweet and quote-tweet functions have been left active.

The Telegraph newspaper in the U.K. called Twitter’s move “perhaps the bravest and riskiest thing that any tech giant has ever done.”

Following up from his executive order, Trump on Friday morning called on lawmakers on Capitol Hill to revoke Twitter’s liability shield under Section 230 of the Communications Decency Act of 1996, which allows companies like Twitter and Facebook Inc. to display content that’s controversial, offensive and libelous without fear of lawsuits.

On Thursday, Trump told reporters that his executive order “calls for new regulations under section 230 of the Communications Decency Act to make it that social media companies that engage in censoring or any political conduct will not be able to keep their liability shield.”

It wasn’t the first time Twitter has attached a warning to a politician’s tweet. In April, a message from Brazilian lawmaker Osmar Terra was flagged after he said quarantine measures risked increasing the spread of Covid-19. He included a chart to support his argument.

As was the case with Trump’s tweet, Terra’s message remained accessible because it was in “the public interest,” but its content was hidden from view by default. 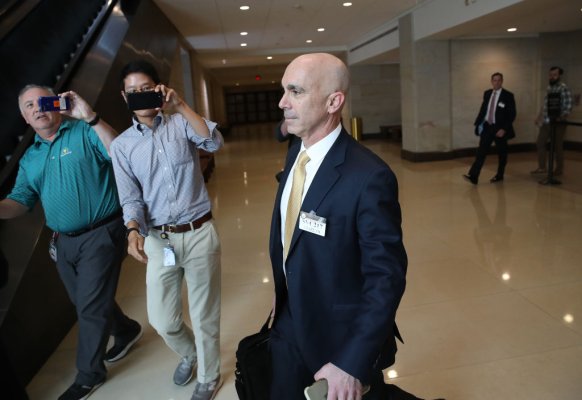 Trump's War on Watchdogs
Next Up: Editor's Pick