Despite their seeming lightness, or maybe because of it, screwball comedies are complicated to make. It’s much easier for Hollywood to throw pots of money at an action picture than to find two actors with great chemistry who can sustain a hamster-wheeling plot for 90 minutes. Little wonder the screwball comedy is practically a lost genre.

That’s why The Lovebirds, in all its harebrained glory, is such a delight. The plot is dumb—but then, it’s just a conveyor belt for the performers’ charm. Kumail Nanjiani and Issa Rae play Jibran and Leilani, a New Orleans couple who, when we first meet them, are falling deeply and convincingly in love. That part lasts for about four minutes. Next thing we know, they’re four years into the relationship and their nerves are frayed. He thinks she’s foolish for wanting to try out for The Amazing Race. Referring to the social-justice documentaries he makes for a living, she shoots back, “They’re just reality shows that no one watches.” The ping-ponging rhythm of their argument is so enjoyable that you don’t really worry they might be on the skids—until, as they’re driving to a party Jibran doesn’t want to go to, the fight takes some serious wrong turns. The cutting accusations fly. Their faces, previously animated by low-grade annoyance, are now blank with pain. On the spot, they decide to break up.

Then they hit a bicyclist, who has zoomed out of nowhere. He’s not dead yet, but an aggressive carjacker puts an end to him, in a grimly funny, nerve-jangling way. Jibran and Leilani are afraid to go to the police, knowing how, as two people of color, they’re likely to be treated. They ditch their car and run to a diner, where they sit across from each other stiffly, like crash-test dummies, not sure what to do. The only way out is to solve the mystery themselves: Who was the bicyclist, and why would anyone want him dead?

Their quest leads them into a snare of angry white rich people and a house full of frat guys. It also involves a change of costume, to elude capture: at an all-night convenience store, he grabs a dorky souvenir T-shirt. She slips into shiny magenta pants and a furry unicorn hoodie—she’s the tallest, sparkliest magical creature in all the land.

The Lovebirds, directed by Michael Showalter (who previously made The Big Sick, featuring Nanjiani, and co-wrote the cult favorite Wet Hot American Summer), has a nutty, loose-jointed spirit. The gags by themselves are modest; it’s what Nanjiani and Rae do with them that counts. At the diner, Jibran calms his nerves by driving Leilani crazy with a soliloquy about the extra dollop of milkshake that always arrives, in its metal shaker, along with the regular serving. Why not just measure the amount so it all fits in the glass? He’s not wrong, but you still see why Leilani wants to slug him. Rae plays Leilani with a straight shot of high-strung, high-beam radiance—you can barely imagine her losing a reality-show competition. These two are both a little mad, and they’re made for each other; it takes this absurd mystery to make them see it. The screwball comedy is the truest and purest language of love. Like the song of lovebirds, it sounds like dizzy chatter—until you stop to really listen. 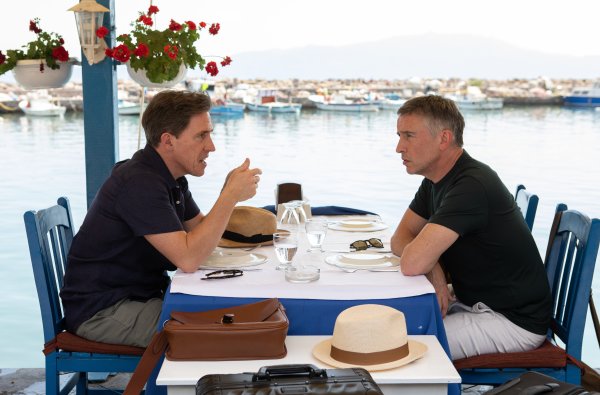 'The Trip to Greece' Is the Vacation We Need
Next Up: Editor's Pick