How Joe Biden Transformed the Competition for the Vice Presidency

Former Vice President Joe Biden speaks about the Coronavirus and the response to it at the Hotel Du Pont in Wilmington, DE, on March 12, 2020
Michael Brochstein —Echoes Wire/Barcroft Media/Getty Images
By Lissandra Villa

On a pleasant day in August 2008, Senator Joe Biden put on a baseball cap and aviator sunglasses and drove a pickup truck to his sister’s Delaware home. He was there for a secret meeting with David Axelrod and David Plouffe, top aides to the presumptive Democratic presidential nominee, Barack Obama. The three men sat by the backyard pool for about two hours. It was one of three clandestine meetings the aides had with top candidates as Obama’s running-mate selection process wound down.

Now Biden is the one doing the vetting as the presumptive nominee. But the process, while still early, is unfolding a bit differently.

Part of that is the man at the top of the ticket. Obama was the first black presidential nominee, a change agent in his 40s who sought experience in his running mate, and picked his vice president from a short list of three white men. Biden, 77, has cast himself as a transitional figure who will pass on the mantle to a rising generation of Democratic stars. He has promised to choose a woman as his nominee.

The pool of potential running mates have also been more candid about their own interest in the job. Rather than giving the traditional I-would-be-honored-but-am-focused-on-my-current-job demurral, some interested parties have been more forthcoming. “People have been more outwardly, more overtly willing to talk to their ambition than they have been in that past,” Axelrod says.

Former Georgia state House minority leader Stacey Abrams has said she would accept if she were asked to fill the role. In an interview with PBS, former national security adviser Susan Rice said, “I certainly would say yes” if Biden tapped her for the job. And in an MSNBC interview with Rachel Maddow, when asked if she would serve if offered the position, Sen. Elizabeth Warren simply replied: “Yes.”

The shift may be due in part to Biden’s own public comments, which appeared to open the door to the possibility that he could serve only one term. “I view myself as a transition candidate,” Biden said at a fundraiser at the end of April. Though Biden has denied speculation that he has considered serving only one term, the outside chance that a Democratic president could cede the stage to his running mate has made a coveted job even more attractive. Whoever he picks could be a top contender for the Democratic nomination as early as 2024. “I’m sure that it has occurred to people that because Biden has basically said he’s a transitional figure that whoever is Vice President would have a leg up moving forward,” Axelrod says.

The field began to form at the final Democratic primary debate, with Biden’s promise to choose a woman running mate. In addition to Abrams, Rice, and Warren, potential candidates are thought to include Senators Tammy Baldwin of Wisconsin, Catherine Cortez Masto of Nevada, Tammy Duckworth of Illinois, Kirsten Gillibrand of New York, Kamala Harris of California and Amy Klobuchar of Minnesota. Governors Michelle Lujan Grisham, whom Politico reported recently told allies that she’s being vetted, and Gretchen Whitmer of Michigan are also said to be in the mix, along with Representative Val Demings of Florida and Keisha Lance Bottoms, mayor of Atlanta.

Biden’s campaign declined to answer questions from TIME about whether they have requested information from potential running mates or whether Biden has spoken privately with any of them, citing “the privacy of the potential candidates.”

Yet Biden hasn’t been shy about dropping hints. In interviews, he’s mentioned Demings and Whitmer as among “close to a dozen really qualified and talented women who are on the list.” And he’s done a series of public events alongside politicians who are considered potential contenders, including a joint interview with Abrams and a virtual fundraiser with Klobuchar.

Allies of prospective candidates have been promoting them. Rep. Ro Khanna, a progressive who served as a national campaign co-chair to Senator Bernie Sanders’ presidential campaign, tweeted that Warren “needs to be on the ticket.” VoteVets, a Democratic group that supports veteran candidates, plugged Duckworth, who also got a boost from her Illinois Senate partner, Dick Durbin. Former Senate Majority Leader Harry Reid has urged Biden to consider Cortez Masto, a fellow Nevadan.

Biden’s campaign has a full selection committee in place, led by former U.S. Senator Chris Dodd, U.S. Rep. Lisa Blunt Rochester, Los Angeles Mayor Eric Garcetti and Cynthia Hogan, a Biden adviser. But the process has been complicated by the pandemic. Biden does not have the luxury of easily meeting face-to-face with prospective running mates (which even during normal times requires acrobatics from campaigns to keep under wraps), as Obama did with him. There are no joint fundraisers or rallies in front of live audiences to test chemistry on a stage or how the audience reacts to the pairing.

Such events are often veiled auditions. Amy Dudley, a former aide to Senator Tim Kaine, recalls Kaine being invited to participate in events for Hillary Clinton’s 2016 campaign, including one in Northern Virginia that featured Clinton herself. “That was definitely an attempt to test out the dynamic,” Dudley says. Clinton later tapped Kaine to join her ticket.

Beyond looking for a governing partner, there are political considerations for Biden in rounding out the ticket. In a primary where his age and ideology were often under scrutiny, his decision could serve as an olive branch to younger, more progressive factions of the party. “It is important that people understand, and he admits, he’s not the future of the party,” says Ian Sams, who was national press secretary for Harris’s presidential campaign. “He’s going to need to pick somebody who is [a] younger, potentially more dynamic and energizing figure to help balance the ticket and ensure the Democratic Party is invested.”

The candidates have adjusted in their own ways. There are fewer women than men in national politics, and even fewer women of color on the national stage. But those who are on it have learned to advocate for themselves along the way, and brought that forthright approach to the vice-presidential selection process.

Abrams, who at least as early as August 2019 told The New York Times that she “would be honored to be considered by any nominee” and who early last year met privately with Biden, made both these points in an interview with TIME on May 19. When asked whether she thought a man would be criticized for being open about his ambition the way she is, she simply said: “No.”

“What I’ve responded to has been the question of whether I believe I should stand for it if I’m invited, and whether I can,” Abrams says. “And as a woman of color, I think about the women who are looking at me, the young women of color, those who’ve been told to hide their interest and pretend through coyness that they don’t have ambition. My ambition is to serve.”

—With reporting by Molly Ball 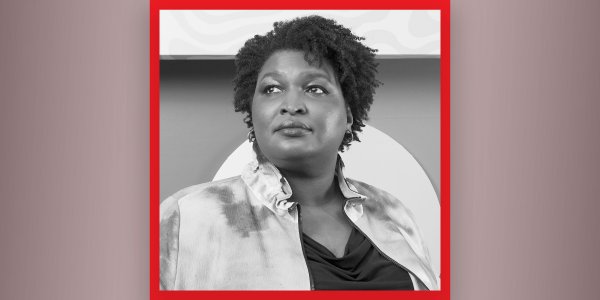 Why Stacey Abrams Is Candid About Wanting to Be Vice President
Next Up: Editor's Pick