This Professor Was One of the First Investors in Vaccine-Maker Moderna. He’s Now Worth Nearly $1 Billion

Bob Langer, a professor at the Massachusetts Institute of Technology (MIT), stands for a photo at his lab in Boston, Massachusetts, U.S., on Monday, Oct. 31, 2011.
Kelvin Ma–Bloomberg/Getty Images
By Devon Pendleton and Tom Maloney / Bloomberg

Another early investor of Moderna is on the cusp of owning a stake worth at least $1 billion after the biotech firm reported encouraging early trial results for an experimental Covid-19 vaccine.

The value of board member Bob Langer’s 3.2% holding, including stock options, rose to $934.3 million Monday, as the shares surged 20% to a record $80 each. Langer, a professor at the Massachusetts Institute of Technology, would be at least the third individual with Moderna holdings topping $1 billion, joining Chief Executive Officer Stephane Bancel and Harvard University professor Timothy Springer.

Moderna, whose shares have more than quadrupled this year, released interim data from a small phase 1 trial showing positive early signs that the vaccine can create an immune system response to the virus in humans. The news helped fuel a broader surge in stocks, with the S&P 500 Index advancing 3.2%, the most since April 8.

The company priced a stock offering to fund manufacturing of its coronavirus vaccine at $76 a share, 5% below the last close, people familiar with the deal said after Monday’s market trading.

Langer, 71, has licensed or sub-licensed patents to more than 400 biotech, pharmaceutical, chemical and medical companies, according to his biography at MIT’s Langer Lab.

Bancel and Springer own stakes worth $2.45 billion and $1.38 billion, respectively, according to the Bloomberg Billionaires Index. The biggest beneficiary of the stock surge is top shareholder Flagship Pioneering Inc., a firm started by Moderna co-founder Noubar Afeyan. Flagship distributed 10 million shares to investors last week, leaving it with an 11% stake worth $3.27 billion. Afeyan declined to elaborate when asked about how much of the stock he owns individually.

“The broader market reaction is a measure of the need people have to perceive that there’s a scientific, technological solution to this kind of battle,” Afeyan said in a phone interview. “We’ve increased expectations, but that hasn’t changed what we do.”

Bancel and other Moderna executives, including outgoing Chief Financial Officer Lorence Kim and President Stephen Hoge, have been selling shares, some through prearranged trading plans. Bancel has sold about 200,000 shares since Feb. 21, data compiled by Bloomberg show.

Moncef Slaoui, who owned 82,508 shares as of Feb. 21, stepped down from Moderna’s board last week and plans to divest his stake to help lead “Operation Warp Speed,” a Trump administration effort involving the private and public sectors to accelerate the development of a vaccine, the company said in an emailed statement.

Slaoui intends to donate the incremental value accrued from his Moderna stake since the May 14 close to cancer research, Caitlin Oakley, a spokeswoman for the U.S. Department of Health & Human Services, wrote in an email.

Moderna Insiders Get Fresh Chance to Cash Out After 200% Surge

Other major shareholders include AstraZeneca Plc and Theleme Partners, the hedge fund of Patrick Degorce, a former partner of the Children’s Investment Fund.

–With assistance from Cristin Flanagan and Emma Court. 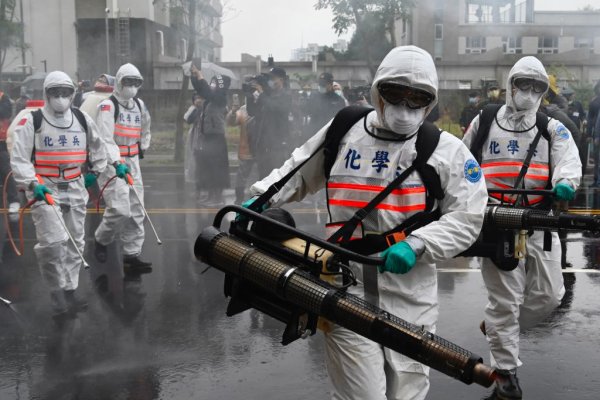 What Taiwan Told the WHO About Coronavirus
Next Up: Editor's Pick