This undated handout picture released on the Facebook page of Saudi activist Loujain al-Hathloul shows her posing for the camera.
AFP via Getty Images
By Joseph Hincks

When Saudi Arabian security forces raided her family’s Riyadh home on May 15, 2018, dragging her sister Loujain out at gunpoint, Lina al-Hathloul was thousands of miles away in Brussels. Two months earlier, UAE security forces had arrested Loujain in Abu Dhabi, where she lived and worked. After being forcibly returned, Saudi authorities detained her for a few days before placing her under a travel ban so the renowned women’s rights activsit could not leave the country. But Lina, then 23, knew none of this; she was working on her masters’ thesis on trade secrecy law in Belgium and her parents hadn’t wanted to worry her.

“To be honest they didn’t tell me anything. I didn’t even know Loujain had been kidnapped from the UAE,” she tells TIME from Brussels, where she still lives. “It was only after she got arrested on May 15, that I heard the full story.”

Global audiences were being sold a different story. Fresh off a charm offensive that included a sit-down with Oprah, and interviews with dozens of media outlets including TIME, Saudi Arabia’s Crown Prince Mohamed bin Salman was preparing to lift the Kingdom’s ban on women driving. He eventually did so on June 24, less than six weeks after the co-ordinated arrest of al-Hathloul and other women’s rights defenders who had long opposed it. They were taken to an unofficial prison known as “the hotel,” where human rights groups say they were tortured and sexually abused. Transferred to an official prison in Jeddah in August 2018, and then another prison near Riyadh in December that year, Loujain’s trial was scheduled to begin this March. It has been indefinitely postponed as the Kingdom contends with the COVID-19 pandemic.

Loujain might have avoided trial altogether, Lina says, if she’d accepted an offer of release, conditional on publicly denying she had been tortured. “She’d rather be in prison, following her values and fighting than be released and lose these two years for nothing.”

In the two years since her sister’s arrest, Lina watched as other changes swept through Saudi Arabia. The powers of the once-feared religious police were blunted; since August 2019 women no longer require the permission of a male “guardian” to travel or marry; and a host of international celebrities, from soccer star Cristiano Ronaldo to singer Mariah Carey, performed at stadiums and arenas recently opened to women.

But MBS’s attempt to cast himself as a modernizing reformer has been undermined by his brutal suppression of dissent. The most egregious incident came in October 2018, when a Saudi hit squad murdered journalist Jamal Khashoggi at the Saudi Arabian embassy in Istanbul, before dismembering his body. Even after the CIA concluded the Crown Prince had ordered his killing, authorities continued to target dissidents as far afield as Norway and Canada. And in 2019, Saudi Arabia executed 184 people, according to Amnesty International, more than the organization has recorded in any previous year.

The ongoing detention of Loujain, along with other prisoners of conscience, continues to hurt MBS’ credibility abroad, says Irwin Cotler, Canada’s former Justice Minister. As Saudi Arabia prepares to host the G20 summit in November, MBS, “can either come in the docket of the accused, or he can come as somebody who has released political prisoners,” says Cotler, who also serves as international legal counsel for Raif Badawi, another high profile political detainee.

Around the world, the COVID-19 pandemic has raised concerns for prisoner welfare. Saudi Arabia’s Justice Ministry did not respond to TIME’s request for comment on provisions taken to protect inmates, and the Kingdom does not allow independent human rights groups to monitor its prisons. But in a worrying indication that inmates’ general health is at risk, another prominent activist, Abdullah al-Hamid, died on April 24, after falling into a coma in prison. For months, authorities had denied the 69-year-old a life-saving heart operation, according to the World Organisation Against Torture.

Saudi authorities have not responded to repeated requests for comment.

In an interview on the second anniversary of her sister’s detention Lina al-Hathloul discussed the lack of adequate investigation into her sister’s alleged torture, and how Saudi Arabia has changed under MBS. (This interview has been edited for length and clarity.)

Has your family been in contact with Loujain since her trial was postponed? How is she doing now?

My parents are allowed to talk to her once a week. Since they postponed the trial, Loujain is really getting tired. When you have things to plan for and you know that you’re going to see people, it’s easier, psychologically. But now no one is telling her anything and she doesn’t know when the next session is going to be. She’s starting to lose hope.

What are the charges Loujain is facing?

For the first 10 months after she was arrested, there were no official charges. The only thing we had was what Saudi media used to say: that she was a traitor, or a spy, or an agent for Qatar. When she received her charges, it was basically all of her activism. Things like going to international conferences to talk about the human rights situation in Saudi Arabia, or being in contact with an E.U. delegation in Saudi Arabia. They also say that she’s been fighting for women’s rights in Saudi Arabia that have already been granted by the Sharia Law. One of the accusations is based on the cyber-crime law but all of the other charges aren’t based on any specific law.

At what point did it become clear to you that Loujain had been tortured in prison?

The first time my parents were allowed to visit Loujain was when she was brought back to the official prison, towards the end of August last year. At first, they couldn’t even tell [my siblings and I] how they felt; they were depressed. But gradually, after more visits, they told us that Loujain was not well. That she could barely walk. That she could barely sit. That she had marks all over her body. After all the reports came out on the Khashoggi case, my parents knew that Loujain had been tortured. They asked her and she admitted everything. Bit by bit she started giving them more details. One day she told my parents that Saud al-Qahtani [a former advisor to the Royal Court and close confidente of MBS] was the one supervising the torture. That he was the one giving the orders, and that he was laughing at her, belittling her. He would threaten her, saying that if he wanted to he could rape her before killing her, and that he could make her body disappear in the sewage system. [Saudi Arabia’s deputy public prosecutor has in the past denied allegations that any activists were tortured.]

Al Qahtani was implicated in Jamal Khashoggi’s murder, but last year Saudi Arabia cleared him of any wrongdoing in an investigation U.N. Special Rapporteur Agnes Callemard called a “mockery of justice.” Are you aware of any investigation into his alleged role in Loujain’s torture?

Nothing. Nothing has been carried out. One day, [Saudi Arabia’s] Human Rights Commission visited Loujain. She told them everything that happened to her. But at the end, she asked, “can you assure me that you can protect me with everything I’m telling you?” They told her, no, honestly we can’t. So, she just took the paper she had written and kept it to herself. [Saudi Arabia’s Human Rights Commission did not respond to TIME’s request for comment on the torture allegations in general, or on Al Qahtani’s alleged presence.] It’s important to remember MBS’s statements on this. In a 2018 interview, Bloomberg asked MBS about Loujain and the other women’s rights activists in prison. He said that they are spies and that tomorrow we’ll show you the videos that prove it. A year later, 60 Minutes asked him the same question about these women, and about their torture. MBS said he can’t get involved in specific cases. That it’s not his job. But if torture happened, he would personally make sure it was investigated.

Since Loujain’s arrest, dozens of sports and entertainment stars have performed at lucrative events in Saudi Arabia. Do you have a message for celebrities considering performing at events in the Kingdom?

Saudi people have long been thirsty for concerts, and for art, and it’s nice of artists to come and perform. But they should understand that their presence is the only window the West has into Saudi Arabia. They are representing a false image because when people think of Saudi Arabia now they think of these events, not what is happening to people. I’m not asking for anyone to boycott Saudi Arabia, but if they go they should at least mention the women who have been fighting for these changes to happen. I think that they have to make a public statement about what is happening. Otherwise, their presence is just a whitewash.

Saudi Arabia has undergone some major reforms. But what’s different about the Kingdom now, under MBS, that most people living overseas struggle to understand?

What’s really different is that before people knew where the red lines were. Now they don’t. For instance, before we didn’t have concerts and we had the religious police. Now we don’t have the religious police and we have concerts, but there’s a [new] public decency law. So, women can get arrested and imprisoned for dancing at a concert. That’s created an atmosphere of fear because you don’t really know what is allowed and what is not. What you have to understand is that Saudi Arabia is becoming a police state. It’s an authoritarian regime.

Last August, your brother Walid wrote on Twitter that Saudi officials had offered Loujain the chance to be released if she would state on video that she had not been tortured. She refused. What does that say about her?

At first they wanted a written document. Then they came back and asked her for a public statement. She told my parents she could not accept this. She knows she can’t trust them and there’s no guarantee that if she does it she will be released. Even if they would have released her, Loujain is in prison because she’s been fighting for other women and for all the Saudi people. I don’t think it would make any sense for her to be free while accepting this. She’d rather be in prison, following her values and fighting, than be released and lose these two years for nothing.

How do you feel now about the case now, two years on?

I have so many questions. How is it possible for people to still believe Saudi Arabia’s responses when they’re asked about Loujain? After two years of arbitrary detention, nothing they say can be believed anymore. It’s just time to release her now. 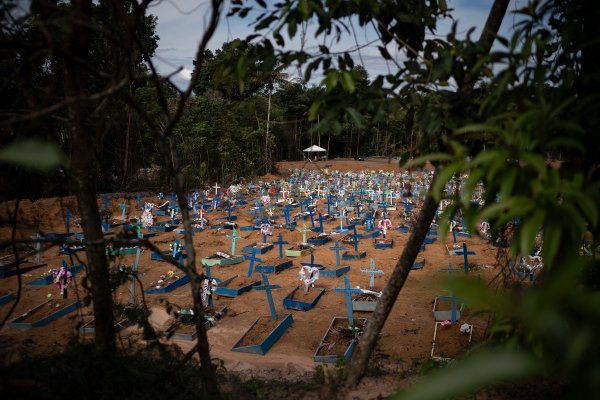 Brazil Risks Being Overwhelmed by Coronavirus
Next Up: Editor's Pick