Welcome to the First Global Economic Depression of Our Lifetimes

People wait on a long line to receive a food bank donation at the Barclays Center on May 15, 2020 in the Brooklyn borough in New York City.
Stephanie Keith—Getty Images
Ideas
By Ian Bremmer
Bremmer is a foreign affairs columnist and editor-at-large at TIME. He is the president of Eurasia Group, a political-risk consultancy, and GZERO Media, a company dedicated to providing intelligent and engaging coverage of international affairs. He teaches applied geopolitics at Columbia University’s School of International and Public Affairs and his most recent book is Us vs. Them: The Failure of Globalism.

Another week, another grisly job reports for the US. The data is still streaming in, but it’s time to start calling this what it is—a global economic depression.

Technically, there’s no official definition of the term “depression.” But compared to a “recession” (defined as two consecutive quarters of contracting economic growth), there are some general rules we can apply—depressions are global, much worse than typical recessions, and their impact on both the economy and society last far longer. It’s this latter point why we still call 2008 the “Great Recession.” For all the drama and chaos, outside the banking industry those handful of months in 2008/2009 didn’t irrevocably alter our society and/or economic system. Awareness about inequality was raised by movements like “Occupy Wall Street,” but the underlying issue went largely unaddressed for more than a decade because large swaths of society could effectively ignore it. Given the coronavirus’ damage to our global economy, they won’t have the luxury of ignoring it any longer. Especially not in the U.S., where the US Fed released a survey this week pointing out that 39% of households making under $40,000 a year lost at least one job in March alone.

And that’s the U.S., still the world’s largest economy and one with ostensibly the most resources to combat both coronavirus and its worst economic effects. In the early days of the pandemic, the U.S. government sprung into action with the idea to provide support to workers and keep businesses afloat with credit lines and other financial instruments, all with the idea of building a bridge till the time when the economy was turned back on. The Federal Reserve joined in with unprecedented support to ensure markets continued to function. In other words, policymakers were aiming for a “V” shaped recovery, one where the economy was shut off for a short period of time and would then immediately snap back to pre-pandemic levels of economic activity (or close to it). Given the scope and scale of the economic carnage, it’s clear we aren’t getting that V-recovery. Recent economic data out of China reinforces that point.

Some of that has to do with the nature of the economic shock itself. Unlike 2008, this is a crisis of the real economy, as both supply and demand are taking massive hits in an unprecedented amount of time. But just as important is the continuing threat posed by the coronavirus. For all the talk of us reaching “peak” coronavirus cases, this is not going to be a “peak” in the style of Mount Fuji—steep ascent, a sharp peak up top, followed by a steep descent. As the examples of South Korea and others have already made clear, that’s not the way this pandemic is playing out; secondary outbreaks are virtually guaranteed, and governments will struggle much harder to impose lockdown restrictions another time around. Rather than a Fuji-like peak, we’re looking at continuing smaller waves of coronavirus outbreaks that ebb and flow until a vaccine is found. And even then, we will have to wait for mass production and distribution of that vaccine, as well as global education and uptake. All told, we are looking at a time horizon closer to 2-3 years rather than the 2-3 months that policymakers may have initially hoped for.

It’s difficult to criticize policymakers for planning on a V-shape recovery—laid off employees want to get back to work, and the desire to rehire many of the workers who lost their jobs in recent weeks is there on the part of business owners, as is the desire for them to resume business operations. That desire for returning to work has given plenty of U.S. governors the cover they need to reopen their economies sooner rather than later, but doing so ensures a stop-start rebound process. It also remains an open question whether business owners will be able to rehire those workers if their businesses don’t manage to make a profit in our next period of social distancing and consumer-wariness of venturing outside.

Combine that with some big trends already in motion—chief among them technology dislocation and insufficient government coordination—and we’re looking at a future where a lot of the jobs lost in the last two months aren’t coming back. There are plenty on unknowns, but for my money, I’d say it’s years before the U.S. unemployment rate falls back down below 10 percent.

Again, we’ve been talking primarily about the U.S., theoretically among the best-equipped to deal with economic shocks like this. But Europe is largely in the same boat, albeit with better social safety nets but lower economic growth trajectory, so let’s call it a wash. And China is about to discover that shutting down was the easy part, too; while Beijing has greater tools at its disposal to impose draconian surveillance and social distancing measures, it too will face serious challenges in making sure government debt doesn’t spiral out of control while regaining its economic footing. China does have one major advantage going for it, however—an unprecedented alignment between politics, business and society. Those who don’t face even larger difficulties ahead.

We should really be concerned about middle-income and developing economies in a coming global depression given that they have even less resources, less resilient healthcare infrastructure, much larger populations and much more unsustainable debt. And they’re the next phase coming. We could well be looking at multiple defaults, which in turn could lead to the global financial crisis that policymakers are currently struggling to avoid, compounding global economic woes even further.

That all is lost. Not exactly.

When we use the word “depression,” the images we conjure up tend to be of Hoovervilles and soup lines circa 1930’s. But the world has come a long way since then, and the last 100 years or so of globalization has catapulted humanity into unprecedented levels of human, economic, political and technological capital. When the Great Depression happened, we didn’t have the social safety nets and political institutions we have today. We also didn’t have a decades-long track record showing the world was better off when cooperating rather than in conflict. Thanks to technology and other advancements, today’s “global middle class” enjoys a quality of life that would have made even the well-off of 1930 envious.

Also, the same things that make pandemics so deadly in 2020—global supply chains and international travel, for example—has also enabled the global interdependence that keeps the world in a relative peace even when the global politics seem to be pushing in the other direction. As a collective whole, humanity is better prepared to weather this depression than we were a century ago.

To avoid the worst of what’s to come, we need better global cooperation. Maybe starting to use the term “depression” will begin focusing minds in the right direction. And if we play our cards right, maybe we could avoid a “great” depression and just get a middling one instead.

The One Thing to Avoid Saying About It on a Zoom Call:

The last Great Depression was started in the U.S.; this new one will have started in China. Emerging markets are moving up in the world. #Progress #KindOf 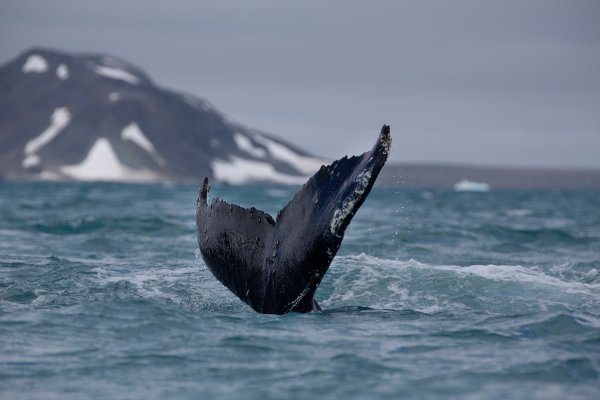 Humpback Whales Have Made a Remarkable Recovery
Next Up: Editor's Pick