A victim of the cholera epidemic in Paris, 1832.
Getty Images
By Maurice Samuels

Hospitals unable to keep pace with the volume of new patients. Political leaders taking to their beds. The morgues overflowing. This isn’t Milan, London or New York during the 2020 coronavirus crisis. It was Paris in 1832 during the great cholera pandemic. Although it sickened people from Asia to the Americas, cholera had particularly dramatic effects in France: in just a few months, the disease killed 20,000 Parisians and over 100,000 people in the country as a whole. As the novel coronavirus now threatens social stability and scrambles political calculations, France’s reaction to this earlier medical crisis has important implications for our own moment.

Much like COVID-19 today, cholera exacerbated economic and social inequality. In the early 1830s, the Industrial Revolution drew large numbers of poor workers to Paris, where they lived in squalid conditions in the heart of the city—the densely packed neighborhoods around Notre-Dame Cathedral, the Tuileries Palace and the former site of the Bastille. These slums became breeding grounds for cholera, a bacterial infection that was spread by poor sanitation. Since, then as now, many wealthy residents fled the city at the first sign of the outbreak, the disease seemed to target the poor.

Soon class tensions reached, quite literally, a fever pitch. The rich blamed the poor for spreading the disease, while the poor thought that the rich were trying to poison them. In this climate of fear and animosity, the suffering Parisians directed their anger at the government.

King Louis-Philippe had come to power following the Revolution of 1830, which ousted the Bourbon monarchy for a second time. (The first time was during the Revolution of 1789, what most people think of as the French Revolution.) More liberal than his Bourbon cousins, Louis-Philippe was a compromise candidate, raised to the throne by business leaders who feared that the revolutionaries would try to institute a republic. It quickly became apparent, however, that the new king enjoyed a very narrow base of support. He was hated by the arch-conservative aristocrats on the right, who thought he had usurped the crown from the Bourbons. And he was hated by supporters of a republic on the left, who thought he had co-opted the revolution they had led.

Louis-Philippe’s poor handling of the cholera crisis brought these political tensions to a boil. Attempting to quell conspiracy theories, his chief of police proclaimed that the government had not poisoned the drinking water—but that miscreants may have done so. He had intended to allay the people’s fears, but wound up stoking them instead. At the same time, the government’s tin-eared hygiene campaign infuriated already-starving workers by recommending sobriety and moderation in food consumption as safeguards against the disease. In a particularly odd nod to superstition, the Queen sewed flannel belts for the poor, promising that these useless talismans would provide immunity. Like today, the peddling of false remedies by those in power only added to the confusion and despair.

Loneliness Is a Modern Invention

Political tensions mounted when the Prime Minister, Casimir Pierre Périer, died of the disease on May 16, 1832. Périer was despised by the working class for his brutal suppression of a strike by silk workers just one year prior. Louis-Philippe outraged the masses by giving Périer a state funeral, but refusing to bestow the same honor on General Lamarque, a beloved hero of the Napoleonic Wars who died from cholera a few weeks later. Ignoring the king’s orders, angry protesters attempted to carry Lamarque’s coffin to the Panthéon, the traditional resting place of France’s great men. Soon barricades had sprung up throughout the central quarters of the city and another revolution loomed. Victor Hugo would make this republican revolt the climax of his epic novel Les Misérables.

Meanwhile, the right-wing supporters of the Bourbons took advantage of the political chaos to stage a coup of their own. Denouncing the disease as France’s punishment for 50 years of revolutionary upheaval, the duchesse de Berry, mother of the 11-year-old Bourbon heir, launched a bloody civil war to reconquer her son’s kingdom. Dressed as a peasant boy, the 4-ft.-7 duchess commanded a guerrilla army in the far west of France, promising that a return to France’s “legitimate” monarchy, along with strict obedience to the teachings of the Catholic Church, were all that was needed to restore stability and health to the nation.

However, if the first lesson of 1832 is that pandemics create opportunities for those on the political margins, the second is that people often prefer the devil they know. As fans of Les Misérables remember, government troops stormed the revolutionary barricades with relative ease. And the duchess was captured after being betrayed by a trusted confidant. Both uprisings ultimately failed because the French public refused to rally to the side of the rebels. Despite his unpopularity and mishandling of the crisis, Louis-Philippe managed to hang on to power during the cholera outbreak because neither side that opposed him offered a convincing alternative to his flawed leadership.

Those who seek to unseat President Trump in the next election should take heed. Trump’s divisive and halting response to the health emergency will not automatically lead to his defeat in November. Incumbency counts more than ever in a crisis, as Louis-Philippe realized the morning after the barricades fell, when he rode through the cholera-ravaged city triumphantly on horseback. If things improve, Trump will surely take credit. And if they worsen, the American people may still prefer not to take a chance on the new. But the example of the cholera outbreak of 1832 also offers Trump’s opponents hope, in the form of guidance for what a real leader should do in a crisis.

Showing compassion for the poor and minority communities that have been particularly hard hit by the coronavirus, and proposing concrete plans to alleviate their suffering, would be a good place to start. A leader should forcefully reject conspiracy theories, not feed them through the dissemination of false information. A leader should not reserve honors for political supporters or deny aid to those on the other side. Most importantly, a leader should listen to scientific experts.

The public deserves better than flannel belts. The French were not able to summon such a leader in 1832, but this does not have to be the case today.

Maurice Samuels is the Betty Jane Anlyan Professor of French at Yale University and the author of The Betrayal of the Duchess: The Scandal that Unmade the Bourbon Monarchy and Made France Modern (Basic Books).

Most Popular on TIME
1
I'm a Minneapolis City Council Member. We Must Disband the Police—Here's What Could Come Next
2
'Police Do Not Belong in Our Schools.' Students Are Demanding an End to Campus Cops After the Death of George Floyd
3
3 Reasons to Pause Before Celebrating Today's Surprising Jobs Numbers 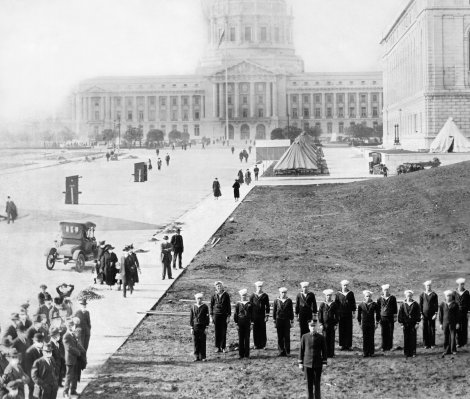