The Great Is Only 'Occasionally' True. But These Aspects of Hulu's Catherine the Great Series Are Based in History

“Ever since I was a child, I’ve felt like greatness was in store for me,” says Catherine, played by Elle Fanning, in the new Hulu series The Great. “Like God himself had spat me forth to land on this earth and in some way transform it. That I was here for a reason, a purpose.”

“Why did he make you a woman then?” asks her maid. “For comedy, I guess,” Catherine wryly replies.

Set in 18th-century Russia, The Great, which premieres on Hulu on May 15, tells the story of a young Catherine the Great as she enters a disastrous marriage to Emperor Peter III of Russia and eventually succeeds in overthrowing him in a coup. Billed as “an occasionally true story,” the series takes liberties with the the truth in favor of a darkly humorous, farcical approach; viewers are privy to the sex lives, secrets and debauchery of Catherine, Peter and their inner circle in the Russian court. It won’t surprise viewers to learn that series creator Tony McNamara was the co-writer of The Favourite, another historical comedy with a sardonic bent, for which Olivia Colman won an Oscar, for her turn as Queen Anne of England.

The Great is the second TV series about the famed Russian Empress in less than a year; HBO’s miniseries starring Helen Mirren took a decidedly more traditional, dramatic approach to adapting Catherine’s story. But aspects of the new series do nod to real moments in Catherine’s life, as it tracks her transformation from an optimistic ingenue to a formidable leader. Here’s a look at how the series reflects the true story behind Catherine’s real-life reign.

Catherine the Great led a successful coup against her husband

Born Princess Sophia Augusta Frederica on May 2, 1729 in Stettin, Prussia (now modern-day northwestern Poland), Catherine married heir to the Russian throne Charles Peter Ulrich in Saint Petersburg, Russia, at the age of 16. To prepare for her new royal life in Russia, she converted to the Russian Orthodox Church, changed her name to Yekaterina Alekseyevna and learned to speak Russian. At the time, Russia was ruled by Peter’s aunt Elizabeth, and Peter was heir to the throne. The Great plays creatively with the facts here; when Fanning’s Catherine arrives at the Russian court, Peter is already emperor, a role in which is portrayed as completely inept.

The couple’s arranged marriage was instantly an unhappy one, as depicted in The Great, and both had affairs with other lovers. One of the reasons historians know so much about Catherine’s experiences and feelings during her life is because of the extensive and detailed memoirs she left behind. Her writing described Peter variously as a “drunkard,” “good-for-nothing” and an “idiot.” The Great relies on this interpretation of Peter, played by Nicholas Hoult (also of The Favourite), who is openly obnoxious about having an affair with his best friend’s wife, forces his advisers to do ridiculous tasks and orders murders on impulse. With the help of her maid and confidante, Catherine starts plotting to overthrow Peter, an objective which quickly emerges as the series’ central storyline.

Nicholas Hoult and Elle Fanning in 'The Great'
Hulu

In reality, the plot was not set in motion until 1762, when the couple had been married for 18 years. In January of that year, Peter became Emperor after the death of the Empress Elizabeth. A series of military missteps badly damaged his reputation throughout Europe, as well as cementing his unpopularity at home, and the alliances that Catherine had worked to build were betrayed by Peter’s decisions. Rumors also started to circulate that Peter was planning to get rid of Catherine, and momentum quickly gathered to arrange a coup d’état that would force him to abdicate and install her as ruler. A mere six months into Peter’s reign, in June 1762, Catherine launched her coup with the support of public opinion, the aristocratic class and the military, and was proclaimed Empress by the Russian Church. The same day, Peter was forced to abdicate; eight days later, he was assassinated. Mystery remains as to how he died, although it’s likely to have been at the hand of one of Catherine’s supporters.

Catherine wasn’t the first female ruler to have claimed the throne of Russia through a coup; Peter’s aunt Elizabeth had done the same in 1741. But Catherine would go on to rule for 34 years, making her Russia’s longest-serving female ruler, and she would preside over significant development and modernization of Russia. Much like the reigns of Elizabeth I and Queen Victoria of England, the end of Catherine’s reign saw her country strengthened and recognized as one of the world’s great powers.

She cared about women’s education

“Women are for seeding, not reading,” Peter tells Catherine in The Great. This statement accurately alludes to overarching sentiments of the time: Catherine was expected to provide a male heir for Peter, rather than pursue her own ambitions. In The Great, Fanning’s Catherine arrives at the Russian Court brimming with ideas to reform education, well-versed in the writings of Enlightenment philosopher Jean-Jacques Rousseau, but Peter destroys her plan to build a school when he realizes she intends to educate women.

In reality, Catherine was indeed passionate about education, particularly the arts and sciences. Opportunities for women at that time were scarce. In 1764, she issued a decree establishing the Smolny Institute for daughters of the nobility in Saint Petersburg, Russia’s first educational institution for women. Catherine herself was an avid reader and art collector with literary aspirations. Throughout her reign, she corresponded with intellectuals across Europe, and their ideas helped influence the progressive future she envisaged for Russia’s culture and society.

She pioneered an inoculation program across Russia

In one episode of The Great, a smallpox outbreak ravages the palace. Learning about the concept of immunization through inoculation, Catherine advocates fiercely for its use, infecting herself with the disease in front of an aghast court. While this scene was fictionalized for dramatic effect, there is more than a kernel of truth to the storyline.

In 1768, countries across Europe were scrambling to find ways to prevent and cure the deadly smallpox disease, a centuries-old parallel to today’s race to find a successful vaccine to end the coronavirus pandemic. A British doctor, Thomas Dimsdale, was exploring the method of inoculation, in which a patient is deliberately infected with a mild form of smallpox to guard against future infections—a precursor to vaccinations as we know them today. Catherine was impressed with his work. At a time when smallpox was sweeping Russia, she invited Dimsdale to the Russian court to perform inoculations on herself and her son, Paul.

While most of her contemporaries saw the treatment as controversial and dangerous, Catherine and her son responded well to the inoculation. Catherine’s willingness to lead by example was a risk that paid off and led to a mass program across Russia; historians estimate that by 1780, 20,000 Russians had been inoculated, and by 1800, that figure rose to 2 million. Catherine made Dimsdale a Baron of the Russian Empire, and she also ennobled the peasant boy who had provided the smallpox matter used for her own inoculation.

She was a target of gossip

Despite Catherine’s achievements and the complexities of her long reign, sensationalist legends about her have persisted throughout the centuries. The myth that she died while trying to have sex with a horse is categorically untrue, as she died of a stroke in November 1796. “It’s not even worth discussing,” historian Simon Sebag Montefiore previously told TIME.

The Great satirically alludes to the malicious gossip that plagued Catherine both before and after her death. Much was made of her personal and sexual life by her subjects, and by historians in the centuries since then, with some branding her a nymphomaniac. At the time, it wasn’t unusual for monarchs across Europe to have multiple affairs and lovers, yet later in her life Catherine drew scrutiny for engaging in relationships with men much younger than herself. It’s no coincidence that other powerful female historical figures, including Cleopatra, Anne Boleyn and Catherine de Medici, have also been targets of rumors about their sexual lives rooted in misogyny.

Catherine foresaw the need to write her own story through her memoirs, counteracting rumors that had spread as a result of her rise to power. While the genre of autobiography didn’t exist as we know it at the time, historian Monika Greenleaf has said that Catherine’s writings “were a pre-emptive strike against the memoirists and biographers who were eager to write her history for her.” 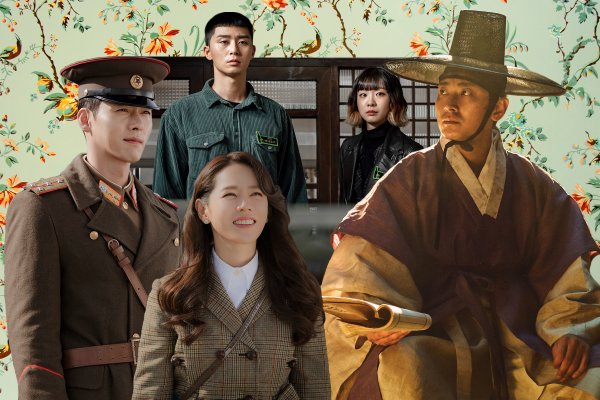 The Best Korean Dramas on Netflix
Next Up: Editor's Pick